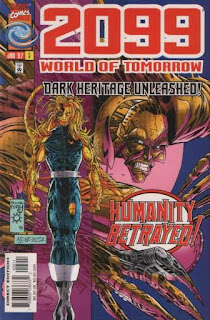 In a Nutshell
The origin of the Takers is revealed as the Phalanx press their attack.

Plot
Betraying his former allies, Winn teleports away with Nostromo. In the Fatherland, Doom emerges from the procedure to purge his armor, reinvigorated and technology free. He, Spider-Man & Xina prepare to fight Magus. On Mars, December, Metalsmith & Dr. Isaacs are reunited with Twilight, who explains the Takers' origins and tells her friends the Phalanx are targeting Earth. Meanwhile, Garokk toys with the defeated Dr. Strange, making her relive her worst memories. Elsewhere, Wulff & Uproar battle Vulture and the Wild Boyz, and Wulff is seemingly killed. Back in Fatherland, Winn arrives with Nostromo, and Magus convinces him to give in to his Phalanx nature. Just then, Doom, Spider-Man & Xina attack, but are no match for the Phalanx, with Nostromo absorbing Xina. With Doom defeated, the Phalanx are now poised to consume the entire planet!