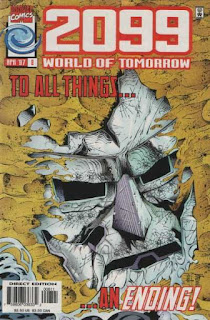 In a Nutshell
Humanity's survivors begin to rebuild in the wake of the Phalanx' defeat.

Plot
At the Last Refuge, Xi'an & Victor Ten Eagles reflect on the remarkable unity between humans & mutants in the wake of the Phalanx attack, as both groups work together to rebuild their home. Morphine Somers is less thrilled, however, and when he notices Luna struggling with her urges to feed on psychic pain, plots to turn her to his side. Elsewhere, Metalhead is reunited with Rosa & Joachim, while Cerebra decides to revive the Sisterhood of Howling Commandments. In Latveria, the survivors of the Phalanx attack receive a posthumous message from Dr. Doom, who labels Xina an official ally of the state, gives Spider-Man information regarding the location of his missing brother, and, apologizing for using him, names Nostromo his heir and ruler of Latveria. Out at sea, Uproar & Wulff are adrift. Wulff, marveling at his new animalistic senses, decides to swim out on his own to find himself, but alerts Uproar to the presence of a nearby ship before leaving. Elsewhere, a diver discovers the Ghost Rider, excited that he will finally belong to D/Monix.