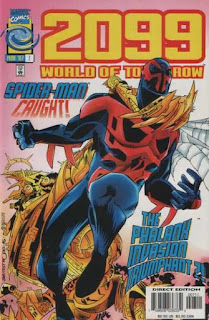 In a Nutshell
The Phalanx are defeated!

Plot
With the help of Metalsmith & Twilight, the Takers' ship crashes into the Phalanx ship, and the Takers launch an assault. In Latveria, Xina battles the Phalanx as a distraction while Spider-Man prepares to kill Nostromo, hoping his death will end the invasion. But he is relieved to be stopped by Doom, who tells the Phalanx he has the best of them, and in return for re-establishing Latveria's borders, will allow the Phalanx to leave the planet. Magus of course refuses, and Doom reveals that Winn is in fact Doom's agent, and he slays Magus, after which Doom triggers a Trojan horse in the Phalanx code, removing the Scout program from Nostromo, thereby rendering their invasion inert. Doom then seemingly sacrifices himself, detonating his castle and wiping out the Phalanx. Meanwhile, in the Last Refuge, Victor Ten Eagles leads the human residents in battle against the Phalanx alongside the X-Men. When Doom's efforts bring the attack to a halt, Franklin connects to the Phalanx in orbit. Determining them to be evil, he destroys their ship. Metalsmith & Twilight die with it, but the threat of the Phalanx is over, and the future is bright with possibilities.