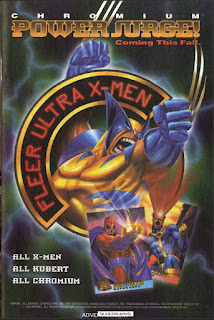 Firsts and Other Notables
The cards in this set are all "chromium", which as far as I can tell, means they have a slicker finish and a more embossed, nearly-3D look to the art (it's the same gimmick that was applied to the covers of Generation X #1, X-Men: Alpha and X-Men: Omega). All of the card art is fully painted and from either Andy Kubert (the regular X-Men artist), his brother Adam (the artist on Wolverine) or their father Joe (a classic artist of the Silver Age who founded a school for comic book art).

The cards are presented with a portrait image on the front and a landscape back featuring a brief profile on the character (containing basic background/power information) and "Comic Activity", highlighting a recent happening for the character in the comics. For characters who appeared on the X-Men animated series, a "TV Activity" blurb is given, contained within a little TV graphic. 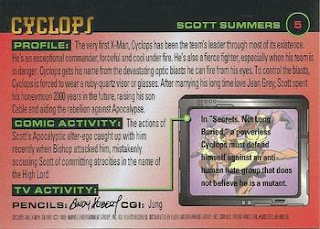 The hero/villain cards are group by teams (starting with the X-Men), with the characters appearing alphabetically within their teams. As in previous sets, not all members of all teams are represented.

Following the hero/villain cards is a ten card "Wolverine Timeline" category, which presents notable moments from Wolverine's history and allows the Kuberts to present their own take on some significant Wolverine images. 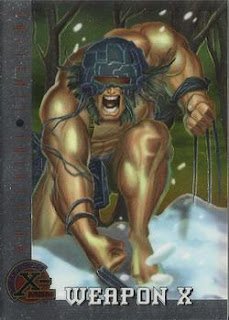 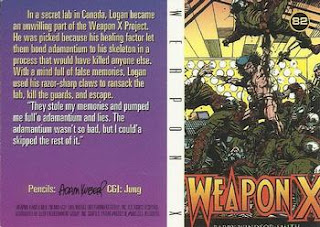 The set rounds out with a "Haunted Mansion" category, presenting the X-Men in various Halloween costumes (Colossus as a vampire really just highlights how much Mr. Sinister looks like Colossus in a cape...). 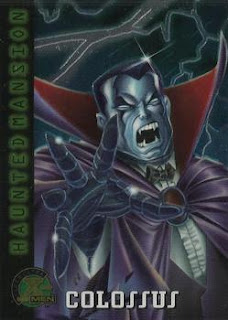 A non-chromium version of this set was released in 1996 at a lower price point.

A Work in Progress
Cannonball is drawn in his X-Force gear, but his cardback references his recent graduation to the X-Men.

Iceman’s cardback references his whole “not fulfilling his potential” plotline.

Sabretooth is listed as a member of X-Factor (where he’ll eventually end up), though his cardback still references his “innocent childlike condition”.

Shatterstar’s real name, Gaveedra Seven, is listed on his cardback.

Colossus is included as a member of Excalibur. Wolfsbane does not receive a card in this set.

Shadowcat is drawn wearing a mask with her blue & yellow nunchuck costume, something she never really does in the comics. 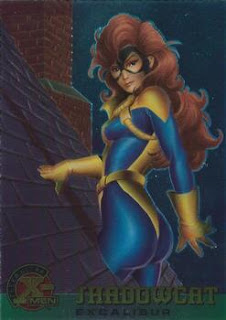 Mondo continues to receive trading cards despite only appearing in a few panels thus far. His “Comic Activity” on his cardback basically describes those panels (with a fair amount of embellishment). 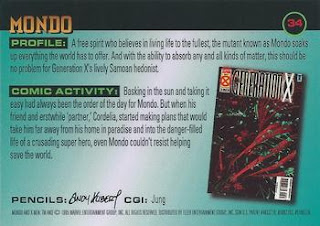 Dark Beast is referred to as “Alter Beast”. 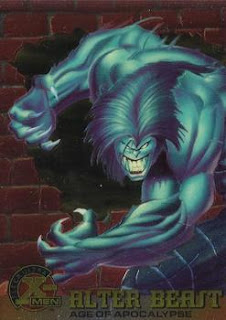 Deadpool & Magneto are listed as superheroes.

Longshot continues to live on via trading cards, despite not appearing in any comics of late. 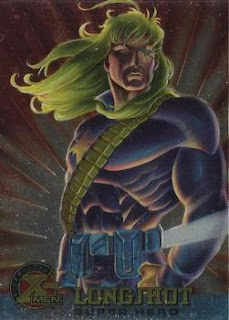 Curiously, Lilandra is listed as a superhero, but Gladiator appears amongst the villains.

Mr. Sinister’s card is inspired by the scene in X-Men #23 where he’s blasted by Cyclops (shortly before kicking off the whole “Third Summers Brother” mishegas). His real name is also given as Nathanial Essex. 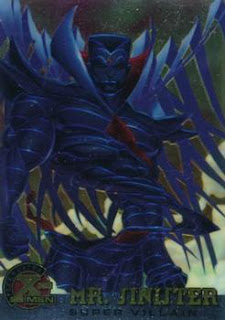 Psylocke’s Halloween costume seems like it could cause fetish overload in some people. 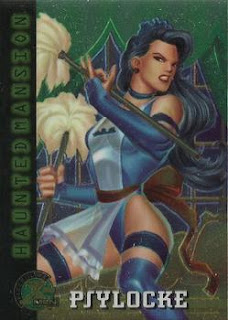 Of Their Time
The four Age of Apocalypse refugees get their own subsection amidst the hero/villain cards. 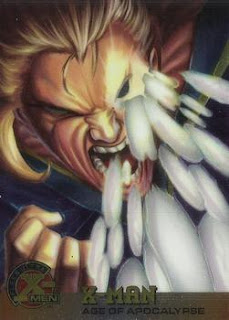 All of the current Dark Riders receive their own card, grouped together as a team (rather than amongst the other supervillains); hilariously, the “comic activity” for everyone is pulled from the same story (Cable #17-19), ie the only one they’ve appeared in at this point. 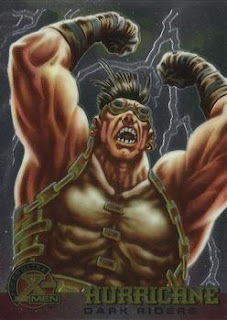 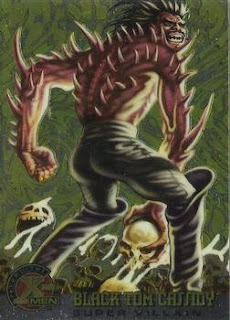 Orphan Maker, on the strength of his recent redesign in Generation X, gets his own card.

Claremontisms
Wolverine’s cardback refers to his recent fight with Sabretooth as one in which “quarter was neither asked nor given”. 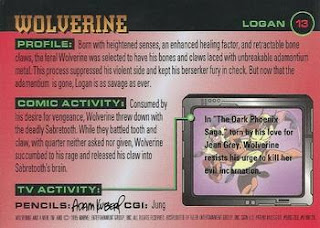 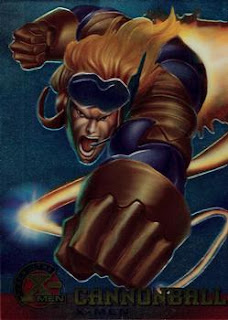 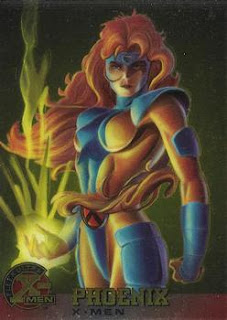 The card format doesn't do her costume any favors, but I like the quietly bad-ass posing, something this character doesn't get often on trading cards. 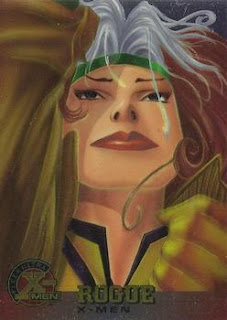 Always a sucker for the choice to zoom-in on a face for a closeup. 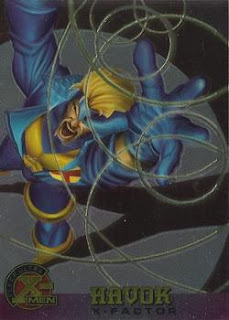 Havok's circle energy effect is made for trading cards. I also like how the figure is slightly off-center, giving the whole thing a somewhat off-kilter vibe. 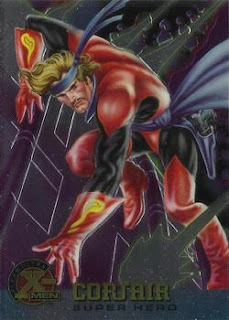 Corsair doesn't often get the trading card treatment, and its nice to see him in action when he does. 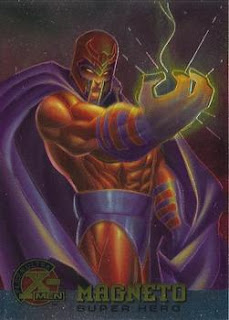 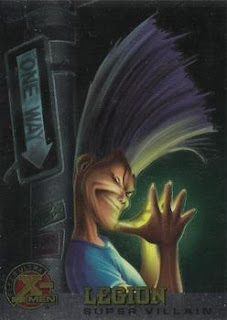 Love the hair, the sense of barely-contained power serving as the light source, and the one way sign pointing the wrong way to emphasize the character's skewed reality.

Austin's Analysis
This is the set which broke my trading card habit. The cards themselves are quite nice: thick stock, nice smell, and the chromium enhancements help the art pop in a way that isn't done justice via digital scans. While the Kubert brothers (with occasional help from their dad) may not be Jim Lee, in terms of 90s era X-Men, they're pretty close, and worthy choices to build a set of cards around. Plus, the smaller set size (100 cards vs. 150) makes this a little more of an evergreen set: put aside the curious inclusion of all the Dark Riders (and, to some extent, the Age of Apocalypse refugees) and the focus is very much on classic characters. Or, at least, the core characters of the era, with fewer one-off "of their time" inclusions than the previous Fleer Ultra X-Men sets.

But these card packs were expensive, for significantly fewer cards per pack, and at a time when Marvel's X-book output alone was stretching my meager income (consisting mostly of my allowance and whatever other money I could beg off my parents) to the breaking point, I just couldn't justify plunking down the coin necessary to try to assemble a full set (and with each pack priced so high, the "wax pack" box of packs, which proved my financial savior for the previous two Fleer Ultra X-Men series, was priced far outside the realm of being a realistic Christmas gift ask). Thus, with that chink in my "X-Men Trading Card" completism armor, it became all too easy to just give up the hobby entirely going forward, focusing all my monetary interests into the ever-expanding comics themselves.

Next Issue
A look at the X-Men Mutant Genesis & Invasion and X-Force Series VI action figures!