Force in Focus: The Mandalorian Episode 04 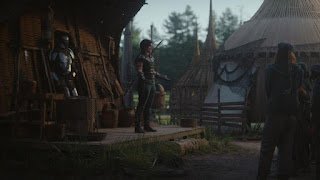 Firsts and Other Notables
This episode marks the first appearance of Cara Dune, a former Rebel shock trooper who has become a mercenary in the wake of the Empire's defeat and the rise of the New Republic, a status quo which quietly comments on earlier sentiments that the New Republic government is weak and ineffective. 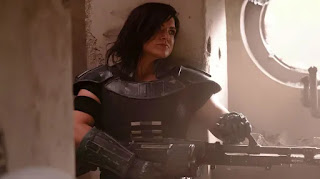 Casting Call
Cara is played by former MMA fighter Gina Carano (who also appeared in, amongst other things, the first Deadpool movie).

Bryce Dallas Howard, daughter of Solo director Ron Howard and a notable actor/director in her own right, directs this episode.

A Work in Progress
The planet most of this episode takes place on is Sorgan. The beings attacking the villagers are Klaatoonians; members of the same species also served as guards in Jabba's palace.

It's confirmed that the Mandalorian isn't a native Mandalorian, but was adopted into the group as a child.

It's also made clear that Mandalorians do remove their helmets (presumably for, amongst other things, eating & sleeping); they just do so alone, and never in the sight of other people.

Did You See?
The cat-like creature which hissed at the Child was a lothcat, a species which appeared in Rebels. It is native to the planet of Lothal, which was the main setting of that series. 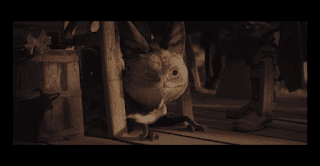 Austin's Analysis
After straying from its Western influences a bit (relative to the first episode, at least), this episode returns to them in full force, presenting, essentially, The Magnificent Seven but with a bounty hunter, a former Rebel shock trooper and a Baby Yoda instead of seven mercenaries. It's a fun if narratively inconsequential episode (it veers in the direction of both suggesting a new setting and then as a way to separate the Mandalorian and the Child, but by the end, both characters are essentially right back where they started), but there's nothing inherently wrong with an episode that isn't an integral chapter in an ongoing narrative - if anything, it helps the series feel like a series, and not an extended movie cut into eight chunks. The direction does an effective job of building tension throughout the nightime battle and presenting the presence of one AT-ST scout walker as a serious threat despite the fact that we've seen Chewbacca and the murder bears dispatch them with relative ease in Return of the Jedi, and the confident but laid-back (relatively) Cara Dunne makes for an interesting counterpoint to the Mandalorian. While perhaps not as narratively significant nor as stylistic as some earlier episodes, there is something pleasingly episodic about it.