Force in Focus: The Rise of Skywalker 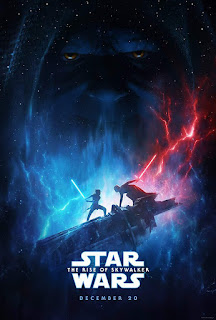 Rey Palpatine
Rey being the Emperor's granddaughter is the dumbest thing since midichlorians.

It's dumb for two reasons, one subjective, one more textual. The first, subjective, reason is that it wipes out the whole notion that anyone can be a hero, that the Force doesn't just manifest itself in people of certain lineages, etc. Thankfully, the film doesn't entirely remove Rey's parentage of thematic meaning (more on that below), but "important lineage" plots are a dime-a-dozen in sci-fi/fantasy (including Star Wars), and "comes from nothing to become the inheritor of the Jedi legacy" would have been something different.

The second is that Palpatine as a character has never, anywhere, prior to this film, been tied in anyway to any kind of familial legacy. Whereas "being a Skywalker" means something in the context of Star Wars, because that family relationship is built into the DNA of the saga "being a Palpatine" means nothing. The entirety of the Anakin/Vader/Luke (and later Ben Solo) thematic arc was built around their familial relationships; all the Emperor has ever canonically cared about is getting and maintaining "unlimited power". Sure, it's entirely within reason that, as the head of the galactic government, he probably had a wife and family in order to maintain his ruse of being a grandfatherly politician, and that his offspring eventually learned the truth about him, fled, hid their child, etc. But that was never even implied, let alone featured, ever before (anywhere in the Star Wars canon, be it film, book, TV show, etc.). Any time someone in the film referred to Rey as "a Palpatine", I wanted to shout at the screen "stop saying that, that's not a thing!". There are no Palpatines; there's just the Emperor. There's more textual familial legacy in Leia's adopted Alderaanian family than in his. Heck, Poe Dameron and Snap Wexley have a larger claim to stories about familial legacy than the Emperor.

The Last Jedi Takedowns
Finn: Last chance to join us on this adventure, Rose!
Rose: Love to, but some angry manbabies on the internet got upset that an Asian Lady was allowed to do heroic things in the last movie, so the director of this one has asked me to mostly sit this one out.

There were more than a few moments in this movie that felt like JJ Abrams looking at the audience and saying "you didn't like The Last Jedi? That's okay, neither did I!" While Rose getting Jar Jar Binksed is the most egregious, some were innocuous (Charlie from Lost's comment about doing Holdo Maneuvers seems like it was written specifically in response to everyone who was like "why don't they just do that every time?"; it was eye-rolling but not terribly damaging to the film) while others were puzzling (what was the point - thematically, textually, whatever - of Kylo Ren deliberately having his mask be rebuilt, just to wear it for a few scenes, then abandon it offscreen with little fanfare, other than "JJ Abrams thought it was cooler than everyone else did, was mad it got wrecked in Last Jedi, so he's putting it back in this one, consarnit!"?).

Love or hate Last Jedi (and/or this movie), what all these little responses in this movie to things in that movie do, however innocuous or impactful, intentional or not, is really underscore the lack of a cohesive vision for the Sequel Trilogy (which, of course, was true of the Original Trilogy as well, but, a few ultimately incestuous urges & mildly chaste kisses aside, there was less in the OT that underscored that lack of a narrative plan).

Poe's Dark Past
The first hour or so of the movie is super-fast paced, with the characters bouncing from locale to locale, and sho-horning in a "Poe used to be a spice runner!" subplot does the film no favors (and really doesn't go anywhere; "how Poe knows how to hotwire a speeder is hardly A Question That Must Be Answered).

Chewie's Medal
Chewie receiving a medal from Leia posthumously was clearly meant to be a moving callback and a wink at the fans who made the fact that Chewie didn't get a medal at the end of New Hope a geek cause celebre for a while there), but all I was thinking was "Chewie already got a medal, and he gave it away to a young girl he befriended in a canonical four issue miniseries a few years ago!"

Zori Bliss
Abrams-favorite Keri Russell actually does a really good job of imbuing the character of Zori with a lot of personality despite limited screen-time and spending most of that time in a face-obscuring helmet, but the character seemingly only exists to give Poe someone to flirt with. Her name may as well have been Zori Nohomo.

Finn's Secret
What the heck did Finn want to tell Rey when they were sinking in the sand and thought they were dying, and more importantly, how does a movie like this get away with introducing something like that and then neither following up on it nor make it clear it was left unanswered deliberately?

Making the Metaphoric Literal
I finally have some sympathy for the people who got really upset by the whole midichlorian business, as this movie does a lot of work to make literal things that were previously more metaphoric. The biggest example is the whole "Diad in the Force" thing - both Force Awakens & Last Jedi made it clear there was a connection between Rey & Kylo Ren, but they largely left it metaphorical; one is light, the other dark, one is a physically related to Luke/Leia, the other spiritually, etc. But here, that connection is made literal, given a specific term, and used as a plot point (and, to be clear, I don't object to the Emperor harnessing their Force powers or whatever to restore himself; he just could have done it without specifically spelling out what he was doing and throwing around terms like "diad in the Force" as if that had ever been uttered anywhere before, ever), thereby robbing it of some of its impact.

Like, fine, you want to raise the stakes of Palpatine's hidden fleet heading into the climax, but razing a world through traditional Star Destroyer laser guns (which is what Star Destroyers were supposed to do - fly into a system and bombard a planet into submission without physically obliterating it) would have worked just fine.

No B-wing
The shot of all the Resistance-affiliated ships coming out of hyperspace (featuring, I believe, the first time the main Star Wars theme played in the context of a movie, and not just over the opening crawl) was pretty awesome/chill-inducing, but I'm still bummed we never really got a good sequence involving a B-wing in action.

Rey Skywalker
If the whole "Rey is the Emperor's Granddaughter" reveal wiped out the notion that maybe somebody important in the galaxy with Force powers isn't related to one of two people who have dominated the fate of the galaxy for two generations, it at least didn't entirely abandon the concept of found families and the idea that there is more to a who a person is than their blood, represented by Rey affirming herself as a Skywalker, with Ghost Luke and Leia's blessing, in the film's closing moments.

Also, anytime one of these movies does a binary sunset it feels like it's pandering specifically to me, and I am here for that.

The Trio
As frenetically paced as the first hour was, it was loads of fun to see the new main trio of Rey, Finn, and Poe on an adventure together, something that hadn't happened yet in this trilogy (and which happened far less with the OT trio than you may think). I know this is the last film in the Skywalker Saga and all the actors are talking about being done, but I would love to see the Further Adventures of these characters in some context (preferably in a film without "fate of the galaxy" consequences).

Palpatine's Dialogue
I'm fairly lukewarm on the matter of the return of the Emperor (neither loving nor hating it; I think the marketing of the film had me fully prepared for his return to the point where I never really even gave it much thought while watching it), but it's always a treat to get to watch Ian McDiarmid chew up and spit out scenery, and I especially enjoyed some of the callbacks to Episode III in the dialogue.

Kylo Ren's Physicality
This film was a little light on epic lightsaber duels (Rey & Kylo Ren clashed plenty along the way, but even their final duel on the remains of the second Death Star lacked the gravitas of previous trilogy-ending duels) but I really loved the physicality Adam Driver brought to his fight scenes, the way Kylo Ren would throw his whole body into fights, like when he tore through the forces on Mustafar in the opening scene, or fought the Knights of Ren barehanded towards the end, or the way he dodged all of Rey's lightsaber attacks without drawing his own weapon inside the Death Star before dropping away. It really added a whole new dimension to the fight choreography.

Han & Ben
Harrison Ford popping up as a Not Force Ghost Ghost was a genuine surprise (I had heard nothing about his involvement) and the scene between him and Kylo Ren was a lovely reprise of their TFA bridge scene. I especially loved the way it also called back the Han/Leia "I love you/I know" from Empire, but did it in a way that wasn't screaming "we're reprising the 'I Love You/I Know' call-and-response you have on that t-shirt you bought from Target isn't that great?!?" and how, in doing so, it made familial love a part of that phrasing alongside romantic love.

Reylo
It's hard to say I liked it (I rolled my eyes pretty hard when Rey woke up from being Force healed and kissed Ben), but I'll allow it since Ben died in the end. It would be much worse if they went off to live happily ever after (or, God forbid, Rey died and Ben lived which, for a moment, I feared was the direction the movie was going). I don't exactly love Star Wars' penchant for allowing mass murderers on a galactic scale go out as heroes thanks to having a brief change of heart and then sacrificing themselves to save the main hero, but at this point, I can't exactly only hold that against this movie.

The Music
As always, John Williams knocks it out of the park, and while this score is, understandably, lighter on the introduction of new themes, it reprises and remixes the existing ones to great effect (appropriate for a film meant to close out a nine-film cycle). If this is Williams' last Star Wars score (and, by all account, it is), he goes out with a bang.

Current Film Rankings
Based on my desire to rewatch a given film at any given time, not based on my estimation of the films' relative objective quality.