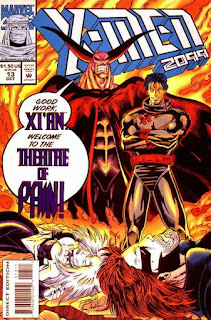 In a Nutshell
Xi'an joins the Theater of Pain

Plot
Brimstone Love enters the Garage, easily bypassing the Driver's security. He watches as the Driver begins the process of digitizing Junkpile, then emerges from the shadows to offer Xi'an a place with the Theater of Pain. When the Driver attacks Brimstone, he knocks him aside, which disables the power, freeing Junkpile, Xi'an, Fitz, & Luna. Junkpile immediately attacks the Driver, who uses his car to defend himself, injuring Junkpile. As a result, Junkpile's mutant power starts pulling all the metal in the room towards him in order to heal him, damaging the Garage in the process & destroying the Driver's cache of digitized mutants. Devastated, the Driver drives off, as Fitz blasts Brimstone Love to prevent him from reclaiming Luna. Meanwhile, Xi'an heals Junkpile, then interrupts Fitz's battle to tell Brimstone Love he's decided to join the Theater. Brimstone Love gives Luna a reprieve for the time being in thanks for leading him to Xi'an, then the pair teleport away, leaving Fitz to declare that he's going back to find the rest of the X-Men, at which point they'll take down the Theater of Pain once and for all.