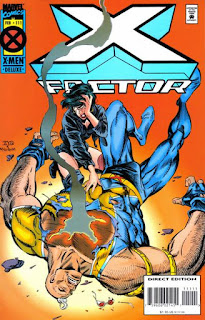 In a Nutshell
Strong Guy suffers a heart attack as reality crystallizes, then shatters.

Plot
The K'Lanti appear before Lila & X-Factor, demanding she return the Harmonium they entrusted to her for safekeeping. Lila agrees to return it to them, and they give her "about an hour" to do so, leaving a series of diamond-shaped bombs in the skies above Madripoor for motivation. Lila teleports herself, Strong Guy & Polaris to Cygnus Prime, a junk world where Jordik likely sold the Harmonium after he stole it from Lila. In Washington DC, Val Cooper is trying to track down X-Factor when she spots Madrox on the street, but he disappears into a crowd. On Cygnus Prime, Strong Guy fights a creature guarding the junk while Lila & Polaris search for the Harmonium. In the process, he absorbs a dangerous amount of kinetic energy. On Earth, Forge, Havok & Wolfsbane work to defuse the K'Lanti's bombs. Just then, Lila, Strong Guy & Polaris return with the Harmonium, but as the K'Lanti depart, they leave Lila with one of the bombs. When it explodes, Strong Guy takes the brunt of the blast, absorbing the energy, which proves to be too much for his heart. He collapses, and as Lila tries desperately to revive him, all of reality crystallizes, then shatters.

Firsts and Other Notables
Each of the X-books this month (with the previously-mentioned exception of Uncanny #321) end with reality being crystallized, then shattered, as a result of Legion's actions in the past (with the world of "Age of Apocalypse" taking the place of the existing reality). Most series also end their pre-"Age of Apocalypse" issues with some manner of cliffhanger (some moreso than others); here, Strong Guy suffers a heart attack shortly before reality shatters, the culmination of the running thread, begun in issue #107, regarding the effect his mutant power (specifically his ability to absorb kinetic energy) has on his heart. As with the varying degrees of cliffhanger, some series will resolve their pre-AoA cliffhangers more directly than others. In the case of X-Factor, the fate of Strong Guy will be mostly handled off-panel, and this issue marks the end of his tenure with the team (he'll return for a trio of issues before the end of the series' original run, and then of course be a mainstay in the later revamped series alongside Madrox). 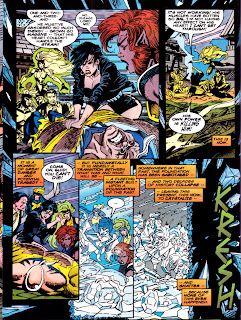 This is also Wolfsbane's last appearance in the series as part of the team; she'll leave off-panel to join her foster mother Moira MacTaggert on Muir Island, joining the cast of Excalibur post-AoA. Like Strong Guy, she will return for the 00s' iteration of X-Factor.

Val spots Jamie Madrox walking the streets of DC, though the apparent return of Multiple Man is another plot thread that will get ignored for awhile coming out of “Age of Apocalypse”. 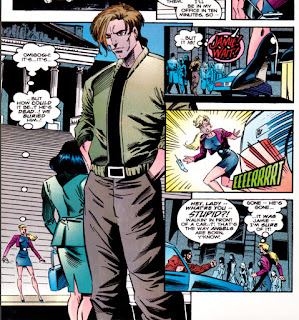 This is Todd DeZago's final issue scripting John Francis Moore's plots; Moore handles both the plotting & scripting starting with Factor X #1. It is also Jan Duursema's last issue as the book's regular penciler, a run which began in earnest with issue #99.

Austin's Analysis
The big cliffhanger/reality warp at the end aside, this issue follows on directly from the previous issue, in which the US government's mutant team fights a bunch of aliens in Asia/on other planets, and as a result, it's just as far removed from the premise & purpose of the series as that one. Which is a shame because, more so than really any of the other series, X-Factor comes out of "Age of Apocalypse" the most changed. As a result, this issue marks really the last time this particular iteration of the team is on display, an iteration that, give or take a Madrox or a Forge, more or less goes back to the launch of the All New, All Different X-Factor in issue #71. Some of the characters in this issue will still be part of the series (though also, Strong Guy & Wolfsbane won't) and the group will still technically function as the US government's team of mutants, but the tone and types of stories and characters involved will be different enough that this issue can be considered the finale of the "All New, All Different" iteration as it's come to be known, which makes it a shame that, for the last hurrah, this isn't more consistent with what's come before.