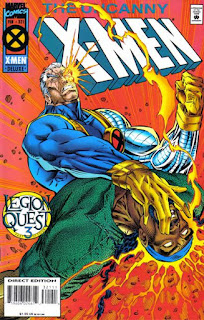 In a Nutshell
Cable attempts to contact the time-lost X-Men as Legion puts his plan into action.

Plot
Twenty years ago in Haifa, Xavier & Magneto fight side-by-side in a bar brawl, in defense of a disabled veteran being harassed by the patrons. In the present, Xavier, Cable & Phoenix work together, assisted by Shi'ar technology, to send Cable's mind into the past, in order to contact the X-Men stranded there and warn them of Legion's intentions to alter the future and the threat that poses to reality. In the past, those X-Men continue to struggle with not knowing their reason for being in the past, hoping it will become clear soon. Elsewhere, Legion visits his mother Gaby, appearing before her as Xavier, an act that Xavier telepathically senses, realizing Gaby is in danger. As he and Magneto rush to her, Cable arrives in the past, and manages to restore the X-Men's memories. Meanwhile, Xavier & Magneto arrive at the hospital to find a distraught Gaby, at which point Legion emerges, declaring that, in his time, Magneto will become the greatest villain the world will ever know, and for that, he must now die.

Firsts and Other Notables
Part 3 of "Legion Quest", this is the final issue of Uncanny X-Men before it is relaunched as Astonishing X-Men as part of "Age of Apocalypse". In all the other X-books this month, the transition to "Age of Apocalypse" is heralded by a "crystallization wave" in which the final panels of the issue feature reality being crystallized and shattered as a result of Legion changing the past (and creating the new "Age of Apocalypse" reality). But because "Legion Quest" continues directly into X-Men #41, and the reality warp is triggered there, this is the one X-book this month that doesn’t end with that crystallization effect.

Legion, posing as his father, has sex with his mother in this issue (essentially raping her, since she think he's Xavier), which is a thing that happens for not entirely clear reasons and adds an unfortunate taint to the otherwise pretty solid "Legion Quest". 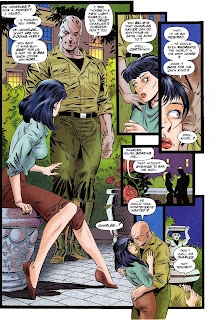 Upon reaching the past, Cable is drawn to Bishop, as he is a temporal anomaly (something that will also feature heavily in Bishop’s “Age of Apocalypse” role). 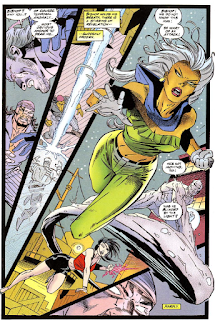 A note at the beginning of this issue demands that readers must read Cable #20 with this issue, and I’m not sure how you read one issue “with” another. Like, you can read an issue before another, or after, but “with” makes it seem like you need to read one page of this, then one page of that, etc.

A Work in Progress
We get one of those great “powers in concert” set ups in this issue, as Xavier, augmented by Shi’ar technology, telepathically triggers Cable’s latent time-travel abilities to send his consciousness back in time to warn the time-traveling X-Men to stop Legion, all while Jean telekinetically holds everything together. 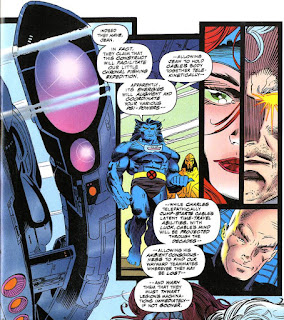 Past Magneto is amused by the notion of anyone calling Xavier “Professor”. 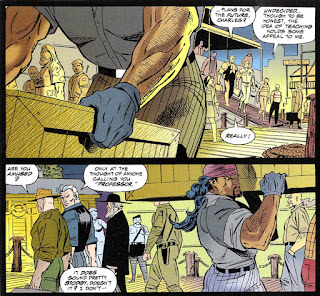 The Grim 'n' Gritty 90s
The Israel story is said to be set 20 years ago, or the early 70s, making the still-youngish looking Gabrielle Haller’s experiences in the holocaust harder to reconcile.

"Professor Xavier is a jerk!"
Past Xavier rightly worries about the ethics of dating Gaby, his patient (though not enough to, you know, not date her). 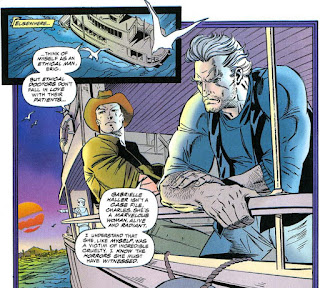 For Sale
There’s an ad for the Mutant Apocalypse SNES game. 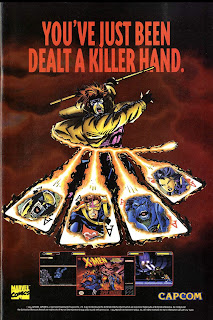 Bullpen Bulletins
A Christmas-themed X-Facts page announces all the “Age of Apocalypse” title changes (and their logos), along with the cover to Age of Apocalypse Alpha #1. It also cites the buzz for the event in Wizard andComics Buyers Guide, a rare acknowledgement of the press that was, indeed, relentlessly hyping these events. 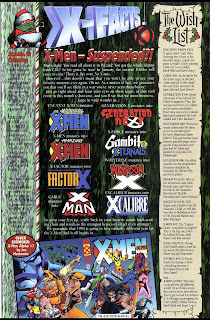 It also mentions (in the nigh-illegible breathtakingly-90s designed section of the page) that this is Rogue’s 150th issue of the series, which is only partially true (it’s been 150 issues since she joined the team in #171, but she hasn’t appeared in all those issues, including a length absence following her disappearance into the Siege Perilous in issue #247 and her post-relaunch stint in Adjectiveless when the casts of the two books were kept more isolated).

Austin's Analysis
On the surface, this feels a little padded out - does it really require as many pages of Xavier & Magneto bar fighting as it has? - especially since the two big plot developments - Legion confronting Magneto, and Cable successfully "waking up" the time-lost X-Men - all happen in the issue's closing pages, setting up the resolution to come in X-Men #41. But the bar fight serves an important purpose beyond filling pages: it provides a snapshot of the Xavier/Magneto friendship at this moment in time, when the pair is perhaps at their closest, and underscores both Xavier's belief in the importance of fighting for his beliefs, and Magneto's willingness to back up his friend. As a result, the entire bar fight basically lays the groundwork for Magneto's actions in "Age of Apocalypse", as it is that Magneto - not a Magneto for whom his friendship with Xavier is in the past, with years of philosophical differences wedged between them - who will emerge out of the events of the final chapter of the story and proceed to found the X-Men in Xavier's name, determined to back up his friend and fight for a better world, just as he does in the bar in this issue. That makes this issue, essentially, if not the origin of Age of Apocalypse Magneto, then at least a necessary component to understanding that character's later actions and one of the core "twists" to the setup of that reality.

Next Issue
Tomorrow, Strong Guy is in trouble as reality ends in X-Factor #111. Friday, Wolverine comes home and finds Sabretooth sleeping in his room in Wolverine #90. Next week, "Legion Quest" (and reality) concludes in X-Men (vol. 2) #41!