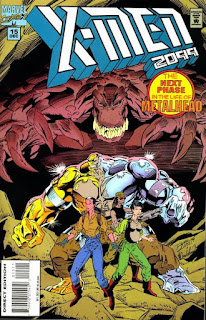 In a Nutshell
Glitterspike & Rosa face the Shadow Dancer

Plot
As Metalhead regains consciousness, Glitterspike flies over the desert with Rosa, who manages to damage his anti-grav unit, sending them both crashing to the ground and knocking them out. Metalhead, Mama Hurricane & Louise Wingfoot race into the desert in search of Rosa. Meanwhile, Rosa & Glitterspike wake up in a cave, brought there by the Shadow Dancer. As Glitterspike picks a fight with the creature, Rosa sneaks away. At Zhao's compound, Fitz convinces Cerebra to stay with the team under his leadership, while Krystalin learns that her father has died. In the desert, Metalhead, Mama Hurricane & Louise find Rosa inside the cave, and the group discovers a crashed space ship, realizing the Shadow Dancer is a stranded alien. Just then, the Shadow Dancer appears, but rightly senses the group means it no harm. Glitterspike, however, comes out of the shadows and attacks the Shadow Dancer again, but Metalhead intervenes, forcing Glitterspike to drain his reserves of light energy, then knocking him out. Later, the group emerges from the cave, with Louise declaring that Rosa's baby will be fine, while a powerless Glitterspike wakes up inside the cave to find himself face to face with the Shadow Dancer.