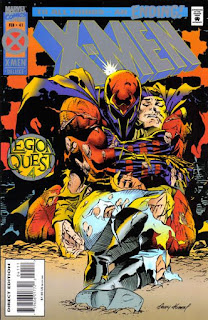 In a Nutshell
Legion accidentally kills Xavier in the past, ending reality.

Plot
As Legion attacks Magneto twenty years in the past, the X-Men who followed him to that time attempt to stop him. In the present, Lilandra contacts Professor X, telling him a crystallization wave launched by the M'Kraan crystal is destroying worlds, and it's heading towards Earth. In the past, the battle between Legion, Magneto and the X-Men draws the attention of Apocalypse, who decides it's time for the order of ascension to begin, in which only the fittest will survive. In Haifa, Iceman uses his power to freeze all the water in Legion's body, seemingly stopping his attack. But Legion restores himself and, having overpowered Magneto, prepares to strike a killing blow. Just then, Xavier throws himself between Legion & Magneto, taking the strike intended for Magneto, killing himself in the process. Having slain his own father, Legion blinks out of existence, and the X-Men disappear as well, save for Bishop, who is left behind, his mind damaged by the energy that ripped away Legion & the X-Men. In the present, the crystallization wave reaches Earth, and as it approaches the X-Men, Rogue reaches out and kisses Gambit, just as all of reality transforms into crystal, then shatters.

Firsts and Other Notables
Xavier dies in this issue, after intercepting a killing blow from Legion meant for Magneto. As a result, all the X-Men and Legion disappear from the past (since Xavier now never formed the X-Men/fathered Legion, and yes, that’s a paradox, because he was killed by the son he never lived to father), with the exception of Bishop who, like with Cable in Uncanny #321, as a result of being a temporal anomaly (ie being a time traveler twice removed) is left in the past with his mind scrambled (which is the condition he’ll be in when “Age of Apocalypse” begins). 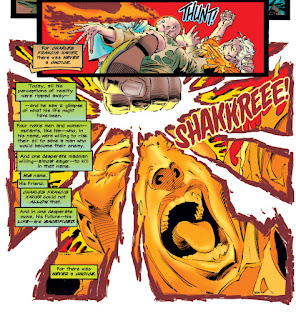 As a result of Xavier’s death in the past, the main reality is wiped out by the crystallization wave, the idea being that without Xavier to form the X-Men, there’s no Phoenix to repair the M’Kraan crystal after Emperor D’Ken opens it. As a result, it spreads unchecked and wipes out the universe; the crystallization effect in the present day is merely reality adjusting to the new “crystallized” state of being as a result of the changes in the past. 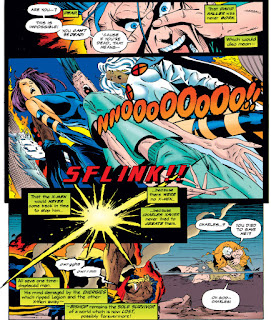 One quick note on the creation of the "Age of Apocalypse" timeline by events in this issue: by 1994, the "rules" of time travel had been pretty well-established within the Marvel Universe (laid down, in large part, by editor Mark Gruenwald over the years). Traveling through time simply creates a new alternate timeline, it doesn't wipe any other timelines from existence. So Kate Pryde (and later Rachel Summers) can go to the past, but the events of their future still occur, no matter what they can do. They can use their knowledge of the future to make sure the new reality in which they find themselves doesn't go down the same path as their reality, but even if it did, it would just mean there's two timelines where Sentinels wiped out mutants, put the survivors in camps, etc. Ditto Bishop and his efforts to stop the X-Traitor - the X-Men of his timeline will always be betrayed, but maybe he can stop these X-Men from befalling the same fate.

But "Age of Apocalypse" is presented differently. Under the existing rules, Legion's actions would create the world of "Age of Apocalypse", but not affect the "main" timeline - he would have created a splintered, alternate timeline as soon as he arrived in the past (ie there's one timeline where Legion goes back in time and kills his father, and another timeline where he doesn't). But his actions instead wipe out the reality he original hails from because (I believe; this is never really explicitly laid out) of the way the X-Men are connected to the M'Kraan crystal, and because of the way the crystal affects reality. So without the X-Men to stop the crystal's expansion, it destroys their existence, and the audience simply shifts over to following the adventures of the X-Men in the "Age of Apocalypse" reality (we'll get into the mechanics of how the "main" reality is restored - and the how AoA reality continues to exist - when we get to X-Men: Omega).

As the crystallization wave approaches, Rogue kisses Gambit, the first time the pair have shared romantic physical contact with each other. It’s basically the “crystallization cliffhanger” for this issue, and the ramifications of that kiss will drive a plot line for Rogue, Gambit and Iceman coming out of “Age of Apocalypse”, ultimately leading to the whole “Gambit helped facilitate the Morlock Massacre” reveal. 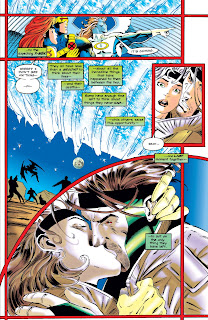 The final pages of the issue shows reality crystallization, and features snippets of the other series’ “cliffhanger” moments as the crystal wave hits them (excluding Uncanny, which has no such moment, and Cable, since the events of Cable #20 occur contemporaneously to this issue as Cable & Domino remain with the present day X-Men in the Israel desert). One scene included that doesn’t appear elsewhere looks to be Adam-X (the X-Treme!!!!) confronting someone who is probably meant to be Erik the Red, as Nicieza continues to try to develop the character via any means possible. 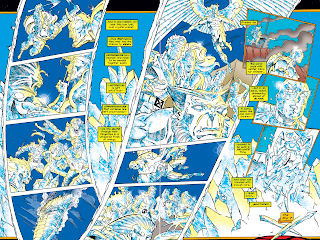 In the past, the fight between Legion, Magneto and the X-Men prompts Apocalypse to realize the time for him to make his move has come, roughly a decade before his “sinister” associate had predicted (clearly a reference to Mr. Sinister, suggesting a closer association between the two than had previously been shown, something that will be explored further in "Age of Apocalypse" and other later stories). This, then, is the catalyst that will launch the Age of Apocalypse, as Apocalypse sets about testing the world ten years before he did in the main reality, and without a fully formed team of X-Men to immediately oppose him. 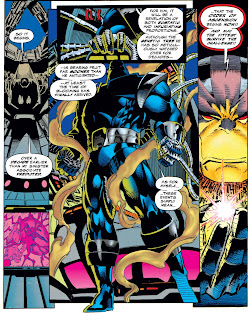 Lilandra drops in to holographically tell Xavier about the reality crystallization wave spreading across the universe, suggesting to Xavier that his X-Men have failed in the past. It also gives Lilandra an opportunity to point out they’re lives are ending as they lived so much of their time together, physically apart, but together in spirit. 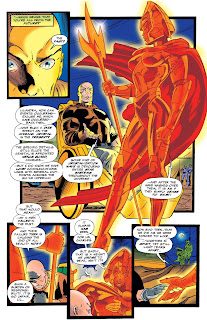 A Work in Progress
Psylocke is back to having short hair. 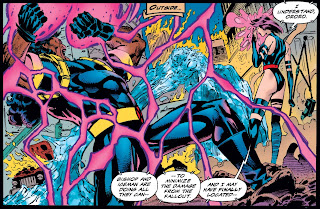 Past Xavier communicates telepathically with Psylocke, only the second time he’s done so with a fellow telepath. There’s no footnote, but the first time would be his encounter with the future Shadow King in X-Men #117.

That issue is referenced again when Xavier recognizes the adult Storm as the little girl he encountered in Cairo.

The encounter with Cable in Uncanny #321 has unblocked whatever restraints Iceman had subconsciously put on his powers, allowing him to freeze all the water in Legion’s body (as opposed to his usual tactic of encasing people in an ice sheaf). 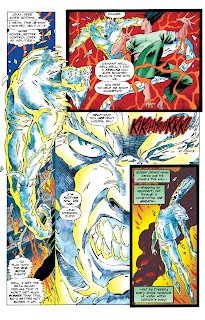 Shortly before he dives in front of Legion’s attack, Xavier says he can’t concentrate enough to use his powers, which seems like a pretty lame excuse, but I appreciate Niceiza writing in an explanation so I don’t have to ask “why didn’t Xavier stop Legion telepathically?” 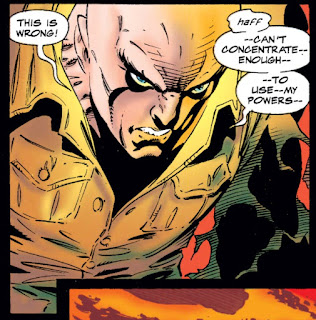 The Grim 'n' Gritty 90s
There’s a mild gimmick to this issue’s cover, as the logo and cover text is printed with silver ink.

Austin's Analysis
Given that it wraps-up both the immediate story and all of reality, this issue concludes "Legion Quest" in suitably epic fashion, as the X-Men fail to stop Legion from altering the timeline when Xavier sacrifices himself to save Magneto (and, uh, doom all reality). Though Kubert seems a little off his game in places - even in the pages where Ron Garney isn't pitching in, some of the figure work is scratchier than usual for Kubert, and it's not always clear where the characters are in relation to each other or their surroundings - there's still a tremendous amount of energy on the pages along with a larger-than-life scope, and Nicieza does his best to ramp up the pathos, from Magneto's bewilderment as he fights for his life, to Cyclops, Phoenix & Archangel's "seasoned pro" reaction to the approaching crystallization wave, to Rogue & Gambit's desperate first/last kiss.

The real standout character, though, is Past Magneto, as he desperately tries to defend himself against Legion while also arguing against the notion of executing him for crimes he has yet to commit, and as with the previous chapter, it does a lot to setup Magneto as the central figure of "Age of Apocalypse". Here, Legion essentially becomes the kind of maniacal villain he accuses Magneto of later becoming which, when combined with Xavier's sacrifice on Magneto's behalf, realistically sells the idea that Magneto would instead become someone who would stand up against the kind of villains he sees Legion as being. It is, to borrow a phrasing, nigh-operatic, especially when combined with the tragedy of Bishop, his mind shattered, left behind in a world he doesn't know, and the helplessness of the present day X-Men, as they can do little but watch the end of existence wash over them, and it is the perfect note on which to end the story, as the world as it is known ceases to exist, and the Age of Apocalypse begins.

Next Issue
Tomorrow, the mystery of Reignfire revealed in X-Force #43. Friday, a character debut we've all been waiting for in Excalibur #86. Next week, Generation X #4!