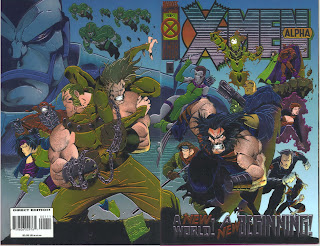 Reality has been wiped clean; now it's time for the Age of Apocalypse!

After another trading card set and some additional promotional material, of course.

May 15: X-Men - Year of the Mutants Collectors Preview

Death brings out the best in creators, apparently, as all of this month's books are strong, with multiple series taking advantage of the looming "Age of Apocalypse" event to end things with a bang. The issue that actually triggers that destruction takes the top spot, even with some spotty art. After that, Generation X, largely ignoring the end of reality, takes #2 based on the sheer quality of craft involved, while Wolverine tells the page-busting first post-admantium confrontation between Wolverine & Sabretooth while ending with arguably the best of the "reality ending cliffhangers", Cable #20, running parallel to X-Men #41, fills in some of the emotional beats of "Legion Quest" and rounds out the top tier of books.

Uncanny this month suffers from being the third part of a four part story, thereby largely serving as setup (and missing out on a big cliffhanger ending). Its connection to "Legion Quest" edges it ahead of Fabian Nicieza's functional departure from X-Force, which is a suitable showcase for his ability to find the characters at the heart of the 90s excess of X-Force, is let down somewhat by the knowledge of what comes after it.

Neither of these issues are bad - X-Factor remains pretty much the standard for an "average" X-Book - but everything else this month is just that much better. Warren Ellis starts to find his voice on Excalibur, only to have it interrupted by AoA, while X-Factor concludes a pretty ho-hum story with a decent cliffhanger that, unfortunately, will be resolved off-panel and then mostly ignored.
Newer Post Older Post Home
Posted by Austin Gorton at 12:00 PM