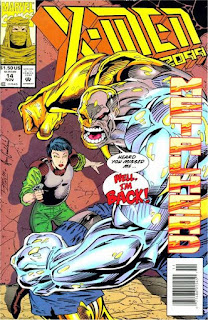 In a Nutshell
As the Freakshow settles in to a new town, they're attacked by Glitterspike.

Plot
In California, a woman is killed by an assassin with light-based powers named Alexi. Meanwhile, Fitz and Luna reunite with the remaining X-Men. Meanstreak is less than pleased to see Luna, but Fitz says they have bigger things to worry about, revealing Xi'an's defection to the Theater of Pain and his intentions to take the group down. Elsewhere, the Freakshow arrives at the home of the Keewazi Nation, where they are welcomed by Louise Wingfoot, an old friend of Mama Hurricane's. Later, Rosa receives a check-up, learning she'll be having a boy, while the assassin - code-named Glitterspike - is given the location of a woman he's trying to track down as payment for his last job. Back in the Keewazi Nation, Dominic runs into the Shadow Dancer, a quasi-legendary creature that lives in the hills surrounding the town, whom Louise says is only supposed to be appear when trouble is near. Just then, Glitterspike flies into town, revealing himself to be Rosa's abusive ex-husband. Metalhead attacks him, but is bested, at which point Glitterspike declares that as he's the father of Rosa's baby, from now on he'll be taking care of both of them.