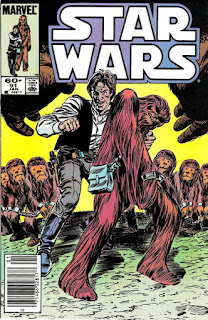 In a Nutshell
Han, Lando & Chewbacca return to Chewbacca's homeworld of Kashyyyk!

Plot
Han, Lando & Chewbacca arrive on Kashyyyk, the Wookiee homeworld. As they make their way to Chewbacca's home, they're confronted by a pale figure who says the Wookiees have dubbed him "Knife", and has made friends with Chewbacca's brother-in-law, Vargi. Knife & Vargi accompany the group to Chewbacca's home for drinks, only to find it empty. Chewbacca is worried, but Han & Lando suggest his family is merely out shopping, since Chewbacca had wanted to surprise them and thus they had no way of knowing he'd be home. However, when Chewbacca's son Lumpy comes home accompanied by three Wookiee thugs, Knife reveals he's holding Chewbacca's family hostage, and that he hopes to restart the slave trade on Kashyyyk. Leaving the captive Han & Lando behind, Knife parades Chewbacca down to the spaceport, hoping to break the spirit of those resistant to his slave trade. However, Han & Lando escape, and Han is able to release Chewbacca, only to be savagely beaten by Vargi. Chewbacca intervenes, but holds back, fearing for his family, until Lando arrives, having released Chewbacca's family. Unrestrained, Chewbacca defeats Vargi, inspiring an uprising against Knife's collaborators. Knife, however, manages to escape, but Han vows to track him down for a rematch as soon as possible.

Firsts and Other Notables
Chewbacca's homeworld of Kashyyyk is depicted in comics for the first time; it was, of course, the setting of much of the Star Wars Holiday Special, released in 1978, and would appear again on-film in Revenge of the Sith. 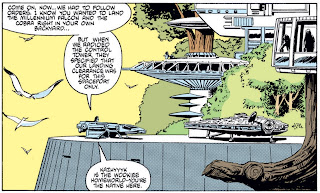 Along with his homeworld, this issue features the first comic book appearance's of Chewbaca's wife Mala, his on Lumpy and his father Itchy, all of whom first appeared in the Holiday Special. 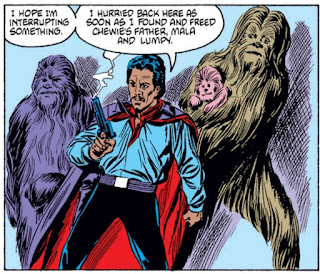 (And since we're talking about the Holiday Special, this seems like as good a time as any to re-plug the episode of the podcast I co-host in which we discussed it).

The villain of this story is called Knife (he says his actual name is difficult to pronounce). Here, he is just presented as strange and alien (moreso than the usual mix of Star Wars aliens); he will return in later issues and be revealed as an agent of the evil Nagai empire, an extra-galactic species who will initiate a conflict within the known-galaxy which will serve as the main overarching plotline for the remainder of the series, making this the first appearance of the Nagai as well. 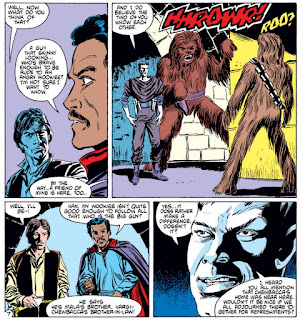 He is assisted on Kashyyyk by Chewbacca's brother-in-law Vargi , making his first and only appearance.

A Work in Progress
The Cobra, the ship Lando's been flying since giving the Falcon back to Han following Return of the Jedi, is stolen by Knife this issue, serving as his means of escape from Kashyyyk following the Chewbacca-inspired revolt against his attempt to re-enslave the Wookiees.

Um, Actually
Chewbacca's homeworld is spelled "Kazhyyyk" throughout this issue.

Remember Return of the Jedi? Wookiee Slavery?
Han recounts the history of Wookiee slavery under the Empire. 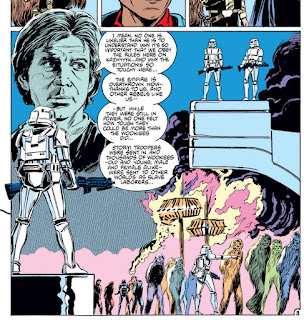 It's in the Mail
A response to a letter in this issue says that both Lumiya and Domina Tagge will return again in a future issue; this is true of the former, but not the latter.

Austin's Analysis
Setting a story on Chewbacca's home planet seems like such a no-brainer of an idea, especially after the Holiday Special provided, in part, a visual reference for it, that it's surprising the series took this long to get there. At the same time, it's entirely possible LucasFilm had, previously, put the kibosh on any such stories (perhaps because of the much-maligned Holiday Special). At any rate, the inaugural Kashyyyk story is perfectly fine, though the art, while serviceable and thanks to the presence of Tom Palmer, entirely consistent with the art in previous issues, is something of a letdown, as it lacks the ability to sell the grandeur of a planet filled with dwellings set amongst trees taller than skyscrapers, while also struggling make a multi-page, dialogue-free Wookiee fight exciting (which, in other hands, could have been fantastic). More interesting, as a result, then, is the presence of Knife, as Duffy begins planting the seeds for the series' next (and final) big story arc. Thankfully, the planting of those seeds, and the simple novelty seeing Chewbacca's homeworld in print, is enough to keep this issue engaging despite the lackluster art.

Next Issue
The double-sized return of Flint & Barney!