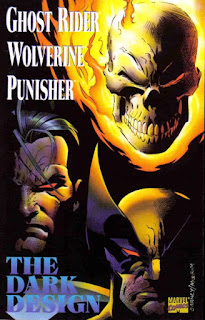 Plot
In the town of Christ's Crown, Ghost Rider attempts to save Lucy Crumm from the Corrupt, servants of Blackheart. He succeeds, but is infected by one of the Corrupt in the process, forcing him to transform back into Dan Ketch. Meanwhile, Punisher & Wolverine, telepathically drawn to the town by Lucy, meet up, then proceed to rendezvous with Dan, Lucy, and Lucy's group of rebels. When Wolverine & Punisher learn Blackheart has returned, they agree to help the rebels defeat him, but just then, the Corrupt attack, drawn to the location by Ghost Rider's infection, and capture Dan & Lucy. When Punisher & Wolverine lead the rebels to rescue them, Punisher & Wolverine are captured as well, and Blackheart torments them with images of their own personal hells. But all three heroes manage to throw off the illusions, and together, they are able to defeat Blackheart. Lucy forgives him, then leaves with Ghost Rider, Punisher & Wolverine, after which Mephisto appears before his son. He offers to join forces with Blackheart, but Blackheart refuses, instead killing Mephisto with a blade poisoned by the blood of Lucy, an innocent child, and takes his place as the new ruler of Hell.

Firsts and Other Notables
This issue is a sequel to 1991's "Hearts of Darkness", featuring the same villain (Mephisto's son Blackheart), taking place in the same town of Christ's Crown, and focusing on Lucy Crumm, the central non-superhero character of the first story.

Wolverine has his bone claws in this story, making it one of the first Wolverine one-shots to reflect that status quo. 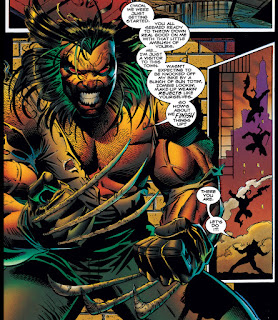 The issue ends with Blackheart killing Mephisto and taking his place, though I have no idea if this is an arrangement that sticks or gets ignored by later writers. 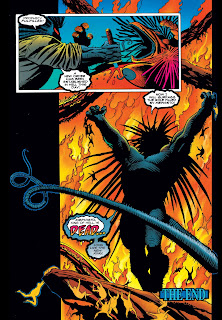 A Work in Progress
There’s a great bit where Blackheart taunts the heroes with hallucinations from failures in their past, and Wolverine of all people is the voice of reason who doesn’t fall for it.

The Grim 'n' Gritty 90s
Wolverine laments not having time to smoke a cigar. 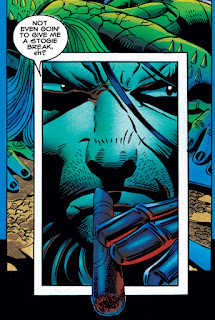 Wolverine suggests that he, Ghost Rider & Punisher need to protect Lucy because, as opposed to Dr. Strange or the Avengers, they consistently come as close to crossing the line as they can without actually crossing it. 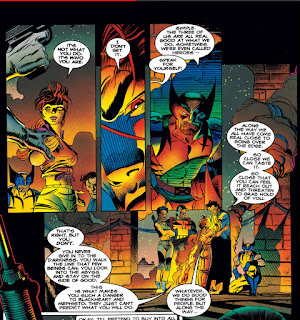 Austin's Analysis
A direct sequel to the earlier Ghost Rider/Wolverine/Punisher team-up one shot "Hearts of Darknes", this issue continues the story begun there while swapping in Howard Mackie's Ghost Rider artist Ron Garney for John Romita Jr. And while Garney's art here is perfectly fine, the JRjr art was the big draw (for me, at least) in the previous issue, so without that, there's not a whole to this issue, which is isn't awful but also begs the question "who was asking for this story to be continued?" Then again, considering teaming up Wolverine, Punisher & Ghost Rider was still, in 1994, like printing money, presumably the answer is "Marvel's sales department". Presenting Wolverine as the rationale, clear-thinking member of this trio at one point in the story is an interesting & entertaining idea, but aside from that (and the fact that this could have been a lot worse than it is), there's not much, good or bad, going on here.