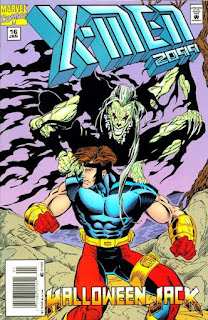 In a Nutshell
Loki transforms into Halloween Jack, and reunites with Meanstreak.

Plot
In Las Vegas, on orders from Desdemona Synge, the Rat Pack targets the suspected leader of a gang of thieves that has been robbing casinos, who turns out to be the would-be Asgardian god, Loki. Meanwhile, Krystalin arrives in Oakland for her father's funeral. Back in Vegas, Desdemona interrogates Loki with a bio-electric device that interferes with his genetic modifications, triggering a painful transformation that allows him to break free and escape. At Zhao's complex, Fitz & Cerebra train together as they discuss plans to confront the Theater of Pain. Outside, Luna attempts to make peace with Meanstreak, but she's attacked from behind and knocked out. Meanstreak battles her shapeshifting assailant, who turns out to be Loki, Meanstreak's old friend Jordan Boone, having taken a new form as Halloween Jack. He tells Meanstreak he's hoping Meanstreak will join him for a little fun, and help him take over Las Vegas.