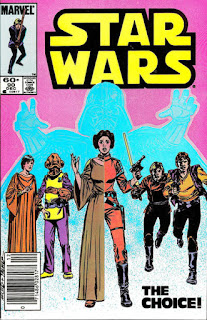 Plot
Princess Leia & Mon Mothma return to Endor from their mission to Herdessa just as Luke & Plif return alongside Rik Duel's gang and an injured Kiro. As Kiro is rushed to medical attention, Mon Mothma briefs Admiral Ackbar on the resurgent Imperial activity she & Leia encountered on Herdessa. Later, Luke & Leia discuss Leia's struggle to reconcile her roles as warrior & diplomat, as well as their father, deciding to keep their relationship to Darth Vader a secret for awhile longer. They then visit a recovering Kiro, and when Luke & Kiro deduce that Kiro tapped into the Force to help save the galaxy, he asks Luke to train him as a Jedi. Luke refuses, angering Kiro. Meanwhile, Mon Mothma & Ackbar host the first meeting of a galactic parliament, where it is agreed that anyone not present forfeits their right to vote. Elsewhere, a fight breaks out between some Rebel soldiers and Rik Duel's gang when Rik is accused of cheating at cards, which leads to Chihido being shot. Luke intervenes and puts a stop to the fight, but Rik insists on vengeance, until Kiro talks him down, having realized the importance of patience and listening to one another. Leia believes it is the action, more than words, which taught Kiro this lesson, while elsewhere, Mon Mothma & Ackbar lament the parliament's decision to forfeit, due to their absence, Luke, Leia, Han, Chewbacca and Lando's rights to help the Alliance govern moving forward.

Firsts and Other Notables
Mon Mothma & Admiral Ackbar convene the first meeting of a galactic parliament, a decidedly low-tech affair (everyone is sitting on wooden benches in, presumably, a tree house), but which is nevertheless a significant event for the series. 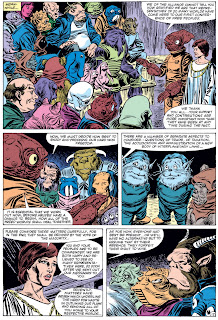 Leia and Luke, reunited on Endor (presumably for the first time since the main characters scattered after Return of the Jedi) to discuss their parentage, and agree to keep the truth about their father a secret for the time being. 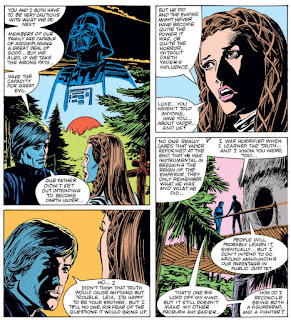 Upon realizing he called on the Force to help him destroy the galaxy-killing weapon in issue #88, Kiro asks Luke to train him to be a Jedi, but Luke refuses. Kiro...doesn’t take it well (Luke doesn't really provide an explanation here, which probably doesn't help Kiro's reaction, but it will later be said that Luke is wary of failing a pupil and creating the next Darth Vader). 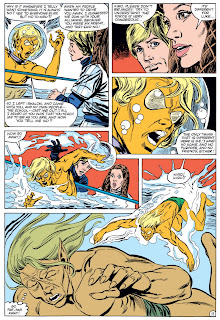 A Work in Progress
Leia is none-too-pleased to see Dani again.

Upon returning to Endor, Luke returns to wearing his black Jedi garb. 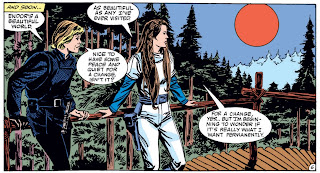 Leia continues to struggle with the transition from warrior to diplomat in the wake of the Alliances’ success. 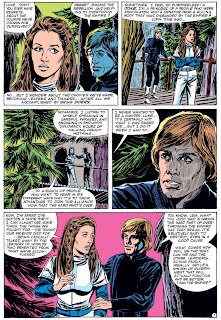 A bit of dialogue from Threepio hangs a lampshade on the fact that Artoo is rolling around the uneven forest ground of Endor.

Luke worries about all the Rebellion soldiers hanging around without a war to fight, wondering how long before tension & boredom boil over. 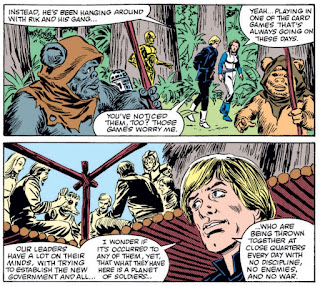 Luke uses the Force to catch a falling Chihido.

Then, he uses it to launch himself up to one of the treetop platforms and defuse the situation. 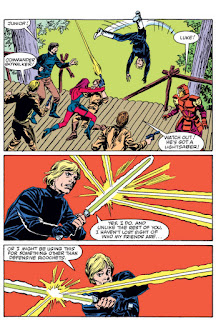 Austin's Analysis
Arguably, this issue grapples with the post-Imperial setting of the Star Wars galaxy more than any other since the release of Return of the Jedi, and after the myriad fill-ins, inventory stories and side-quests the series has presented since then, it is a breath of fresh air. The ending aside (more on that shortly), it is a long-overdue look at the ramifications of the film's events on both the micro and macro levels, from the more personal - Luke & Leia having a conversation about how to publicly handle their relationship with Darth Vader - to the grander, in that we finally see the representatives of assorted worlds get down to the work of creating a post-Empire galactic government. Everything else that happens in the issue involving Kiro & Rik Duel's gang, advances the more immediate plots of the book at this time, but even then, Duffy finds ways to work it into the larger question of how things work in a post-Imperial world, from Luke refusing to train Kiro, to his concerns over the build-up of soldiers with no war left to fight, to Leia continuing to find the post-war life of a diplomat less fulfilling.

That last panel though, is just bizarre. It's meant to be a cliffhanger - "Ackbar and Mon Mothma are screwing over the main characters! Come back next month to see how they take it!" - and that's fine, but it comes with very little work having been done to support it. The earlier scene involving the galactic parliament establishes the idea that anyone not present will forfeit their right to the decision making process, but the context suggests that applies to the designated representatives, not, you know, anyone. At no point in the issue is it even made clear that Ackbar & Mothma expect Luke & Leia (let alone Han, Lando & Chewie, who are still away from Endor on a mission Ackbar gave them) to be at this meeting, nor are they ever shown having to agonize over, say, stopping to help defuse the situation with Rik and the other Rebels, or making amends with Kiro, over attending the meeting, and just having to hope that Mon Mothma will vouch for them at the meeting (or something). The last panel is written like that's what happens, that Luke & Leia had to make a no-win decision not to attend, and now will pay the price for that - and we're clearly meant to draw a line between Leia's struggle to reconcile her warrior & diplomatic sides and her "failure" to attend the meeting - but at no point earlier in the issue are the stakes made at all clear enough to support the "gotcha" ending. The rest of the issue represents a post-Jedi high, but the last panel just comes out of nowhere.