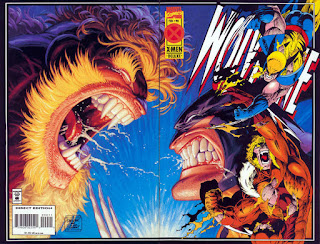 In a Nutshell
Returned to the X-Mansion, Wolverine fights Sabretooth.

Plot
Back at the X-Mansion, Wolverine confronts the captive Sabretooth, who attempts to push through the force field entrance to his cell to attack him. But the pain of the field forces him back. Wolverine proceeds to do his best to go about his business, ignoring Sabretooth, but something doesn't sit right with him. Hearing news reports about serial killer Linus Dorfmann, Wolverine realizes that Sabretooth is slowly building up his pain tolerance in order to breach the field. He rushes to Sabretooth's cell and arrives just as Creed forces himself through the force field. A vicious brawl ensues between the two, but Wolverine holds back, not using his claws, until Sabretooth threatens to hunt down and kill every woman Wolverine has ever loved, starting with Jean Grey and ending with Jubilee. With that, Wolverine loses control, pinning Sabretooth down with one claw on either side of his head. As Sabretooth taunts him further, Wolverine pops his third claw into Sabretooth's head, just as reality crystallizes around them.

Firsts and Other Notables
This issue features the first confrontation between Wolverine & Sabretooth since the former lost his adamantium and the latter was taken into the X-Mansion to treat his homicidal urges. That confrontation ends when Sabretooth, upon escaping from his cell and triggering a fight with Wolverine, successfully goads Wolverine into popping the third claw (after pinning him down with a claw to the left and right of Sabretooth's head) into Sabretooth's head. At that moment, the crystallization effect triggered by Legion in X-Men #41 occurs, destroying reality, leaving readers uncertain if Wolverine killed Sabretooth or not. 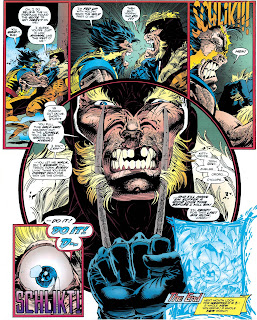 Post-"Age of Apocalypse", we'll learn that Wolverine intended to kill Sabretooth but ultimately just lobotomizes him, temporarily creating a seemingly-innocent child-like Sabretooth (eventually, Sabretooth's power will heal the brain damage and he'll revert to type after pretending to maintain his innocence for awhile longer). His loss of control and attempt to kill Sabretooth will, in turn, cause Wolverine to remove himself from the mansion once more, in order to live on the grounds of the estate as he grapples with his bestial side, a conflict which will culminate in his further devolution to the near-feral "noseless Wolverine" post-issue #100.

While Wolverine's return to the mansion was shown in X-Men #40, this marks his first appearance at the X-Mansion in this series since he left in issue #75.

This issue features a gatefold cover featuring the work of Greg & Tim Hildebrandt (who painted the third series of Marvel Masterpiece cards) alongside regular artist Adam Kubert's. It also features gatefold pages, in which a series of back-to-back pages fold out to creature one large four-page splash, a gimmick I don't think I've ever seen used elsewhere. 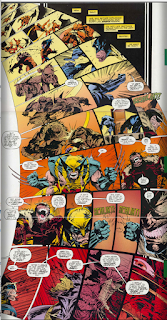 A Work in Progress
Linus, the serial killer Wolverine battled in issue #43 (here given the last name Dorfmann) appears throughout the issue on TV, as reporters and pundits discuss his crimes and takedown by the police. This running commentary ultimately helps Wolverine realize that Sabretooth is attempting to build up his pain tolerance in order to escape his cell. 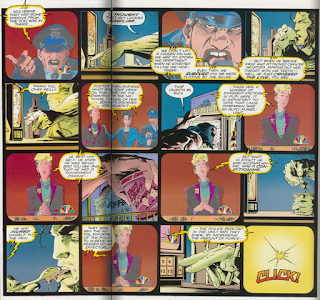 Austin's Analysis
Punctuating Wolverine's return to the X-Mansion and the end of his fifteen issue, post-adamantium self-exile/Greatest Hits tour with a knockdown, drag-out fight between him & Sabretooth makes perfect sense, even before you consider the in-universe and out-of-universe ways Sabretooth functioned as a replacement for Wolverine in the two main X-books while he was gone (and thus, the complete incompatibility of the two sharing the same space, physically & thematically). As much as his time away was about Wolverine grappling with his mortality (and impending death, a plot thread that has been quietly dropped of late), it also served as opportunity to run Wolverine through a gauntlet populated by his Rogues Gallery (the better to see how he handles himself/how they react to his new diminished capacity), and putting Sabretooth at the end of that gauntlet is absolutely fitting.

And to their credit, Hama & Kubert give the confrontation the kind of big epic feel it deserves, in terms of the format (I'm not sure how much the gatefold pages really add, but they do make the issue feel like something special, something more than an average issue) and in the way Sabretooth finally pushes Wolverine to cross a line he's never crossed before, while also taking advantage of the "Legion Quest"/"Age of Apocalypse" setup to add gravitas as Wolverine seemingly ends Sabretooth's life just as reality as they know it ends around them. Kubert's art makes the most of the super-sized pages, rendering both characters larger-than-file, the pages crackling with energy, while Hama strikes a contrast between the steely, quasi-noir voice he's established for Wolverine and the cruder, baroque dialogue of Sabretooth. It's definitely a slight read - thanks to the bombastic art and gatefold pages, it took all of ten minutes to read, if that - but between the production values and the intensity/conclusion of the Wolverine/Sabretooth brawl, it is nevertheless an exciting, fitting end to the "Wolverine on the road" era of the series, while also delivering one of the better "reality ending" cliffhangers heading into "Age of Apocalypse".

Next Issue
Next week, Legion's plan goes awry in X-Men (vol. 2) #41, Reignfire is revealed in X-Force #43 and Excalibur goes to Genosha in Excalibur #86!