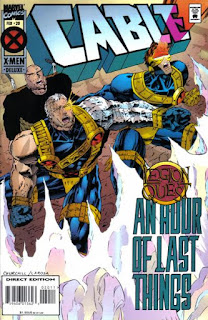 In a Nutshell
As the crystallization wave approaches, the X-Men confront the impending end of reality.

Plot
Cable returns from the past, uncertain what happened. Xavier uses his telepathy to confirm that Cable made contact with the X-Men in the past and warned them about Legion, but there's little left for the X-Men to do in the present but wait. Lilandra contacts Xavier, telling him about galaxies being obliterated by the M'Kraan Crystal, and warning him that the crystallization wave will hit Earth in about an hour. With their apparent end near, Cyclops & Phoenix decide to tell Cable they were Redd & Slym, the couple who raised him, something Cable admits to having figured out already. He then goes to Domino, and they declare their feelings for one another before kissing. As the crystallization wave approaches, Xavier gathers the X-Men around him, telling him he will miss them all terribly. With that, reality crystallizes, then shatters, and Xavier's dream of peaceful co-existence between humans and mutants dies with it.

Firsts and Other Notables
This issue is considered part of the "Legion Quest" story, but it isn't a numbered chapter, as the events it depicts run roughly parallel to the present day events in X-Men #41. As with all the other X-books, it ends with reality ending, and here, even more than in X-Men #41, it does so over narration that serves as eulogy of sorts to the X-Men as a whole. 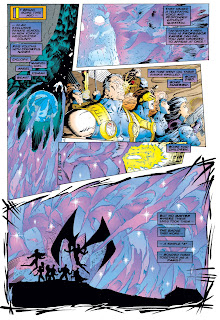 And as with Rogue & Gambit in X-Men #41, Cable & Domino celebrate their impending doom with a kiss, consummating their post-Vanessa will they/won’t they relationship (since the Domino Cable had hooked up with before was technically Vanessa). Coming out of AoA, they will continue to function more like a traditional romantic couple. 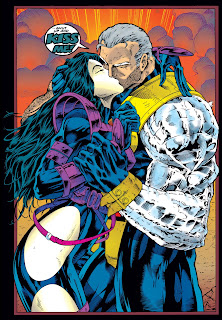 Cyclops & Phoenix decide to tell Cable that they were/are/will be Redd & Slym, the people who raised him; Cable, in turn, admits he’s known all along it was them, but figured they had reasons for not telling him. 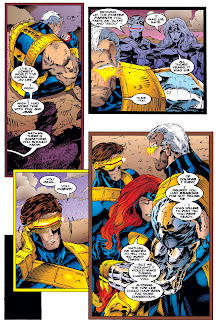 Beast laments dying while he’s so close to learning the secrets of the Legacy Virus. Spoiler alert: he’s not.

Ian Churchill is billed as the guest artist on this issue, which is technically correct, as Steve Skroce is still the book's regular penciler and will return for the four "Age of Apocalypse" issues of X-Man. But since X-Man continues on after "Age of Apocalypse" and Skroce sticks with that book, Churchill returns to Cable in its next issue (four months after this one) as its new regular artist. Comics, everyone!

A Work in Progress
Xavier lays out the thinking behind Cable being drawn to Bishop instead of Psylocke while in the past. 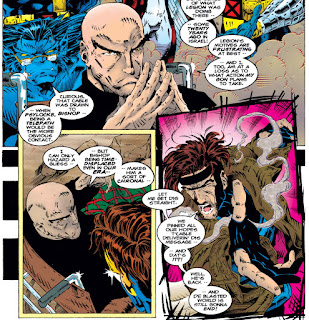 Archangel is wearing his red-and-white costume, instead of the blue he’s wearing in the other Legion Quest issues. 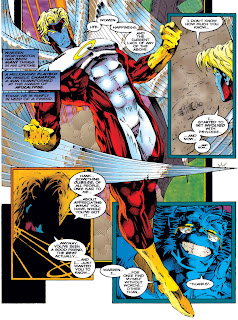 There’s a nice moment when Archangel thanks Beast for being his friend. 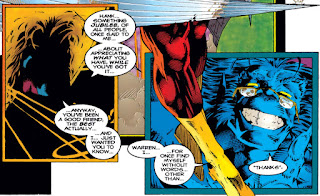 Scott & Jean have a moment together, with Jean admitting she’d have liked to see Wolverine one more time before dying, and Cyclops admitting even he misses him too.

Xavier wonders if he’s even made a difference in the world, prompting Scott & Jean to insist that he has, in a scene that also serves to setup Age of Apocalypse by highlighting how the world would be different without Xavier. 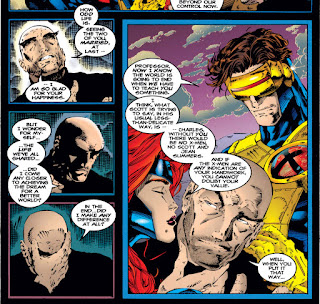 Austin's Analysis
It's a testament to just how integrated Cable has become into the X-books that the majority of the emotional heavy-lifting for "Legion Quest", a storyline which concludes with everyone dying, is left to this issue. X-Men #41 certainly had some of it, but that issue also had to deal with the plot mechanics of how Legion destroyed reality. This issue, on the other hand, has almost no plot to it. Instead, it mostly just features the characters waiting in Israel to find out if the X-Men in the past were successful/for all of reality to end, facing their own mortality as they do so. That the emotional sendoff to the X-Men as a whole happens in Cable, a book that, not that long ago, was floundering around without a stable creative team, largely doing its own thing involving the adventures of a character who, on the surface, was one big walking 90s cliche, is remarkable.

And because Cable has become so much more closely tied to the X-Men over the last few months, he doesn't even feel overshadowed in his own series, as he gets to come clean with his parents about knowing their roles in his upbringing while also expressing his feelings to Domino. But we also get a nice Xavier/Cyclops/Phoenix conversation, echoing their interactions around the couple's wedding, Rogue & Gambit doing their thing ahead of their own big emotional moment in X-Men #41, and longtime besties Beast & Archangel saying goodbye to one another. And all this emotional stuff is happening in an issue of Cable, a book starring a character created by Rob Liefeld, and pretty much most of it lands. That's pretty amazing.

Next Issue
Next week, Unstacking the Deck: Marvel Flair '95.