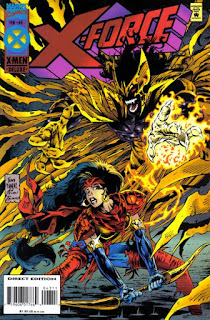 In a Nutshell
Reignfire is revealed to be Sunspot as reality ends.

Plot
With Cable occupied in Israel, Cannonball decides to combine Cerebro with Cable's time displacement core in an attempt to locate the missing Sunspot. Much to his surprise, it works, pinpointing Sunspot on an island in the North Atlantic. Meanwhile, in Greenwich Village, Rictor & Shatterstar go clubbing, while Boomer tries to help a troubled teenage girl get off the streets. Back at X-Force's base, Cannonball contacts Cable, but he's unable to return with X-Force's vehicle. Just then, Locus appears, having been abandoned by Sunspot and shocked to learn she's been gone six months. When she learns that X-Force has located Sunspot on Earth, she agrees to take them to him. They stop along the way to pickup Boomer, Shatterstar & Rictor, then arrive at the Mutant Liberation Front's base in the North Atlantic, in the middle of a pitched battle, just after Reignfire has attacked Moonstar. Cannonball demands to know where Sunspot is, and Reignfire responds by removing his mask and declaring that he is and has always been Sunspot. Just then, reality begins to crystallize, and Cannonball realizes it is what Cable & and the X-Men were trying to stop, as everything turns to crystal, then shatters.

Firsts and Other Notables
It is revealed this issue that Reignfire is actually Sunspot, and always has been (thanks to time travel). While this was always Nicieza's intent for the character, the truth about the relationship between the two will become vastly more complicated over time, as later writers will monkey with it. The immediate aftermath of this revelation, however, will be mostly swept aside, first by "Age of Apocalypse" of course, and then by new series writer Jeph Loeb, who will more less sweep the whole Reignfire business under the rug with a line of dialogue in the first post-AoA issue. 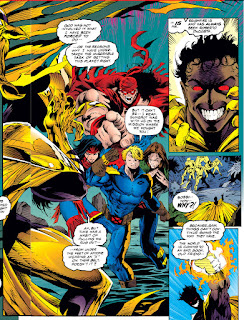 That makes this, functionally, the final X-Force issue for both Fabian Nicieza and Tony Daniel; both remain on the book for the four issue transformation into Gambit and the X-Ternals, but when X-Force returns after "Age of Apocalypse", it will be with the new creative team of Jeph Loeb and Adam Pollina. For Nicieza, this ends a run on the title that goes all the way back to its launch (and into the final three issues of New Mutants), when he scripted over Rob Liefeld's plots before becoming the fill writer on the series.

In addition to sweeping aside the Reignfire business, Loeb's post-AoA debut sets up a new status quo for the team, making this the final issue in the group's short-lived "Murderworld Headquarters, hanging out in New York City" era.

The crystallization effect, which hits just after Reignfire’s revelation, happens in the most detail yet here, as Cannonball has time to realize it’s what Cable & Domino were working to prevent in Israel, just before it overtakes him as well. 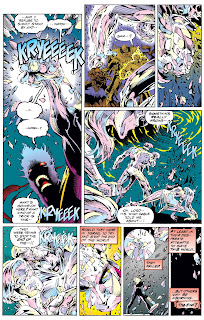 Locus returns this issue, talking about being abandoned by Sunspot and surprised to learn she’s only been gone six months. 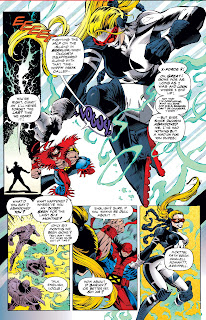 She also references a pair of future events; one she gets wrong (Warpath never goes by the name Pridewalker), one she gets surprisingly right, albeit a little earlier (it takes a little longer than the turn of the century for CDs to become obsolete). 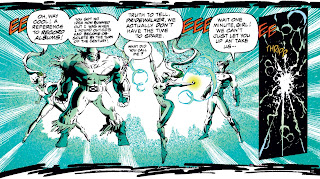 Boomer, reflecting on her past on the streets, attempts to help a young prostitute make a better life for herself; while this immediate plot is abandoned in the wake of AoA and Loeb’s arrival, it could be charitably said to tie-in with some of the changes the character experiences post AoA. 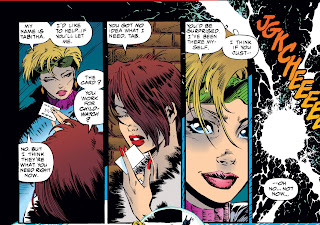 Dani’s horse Darkwind (who was Brightwind, the horse she received in Asgard in New Mutants Special Edition #1 before their most recent return to Earth) is killed by Reignfire this issue. 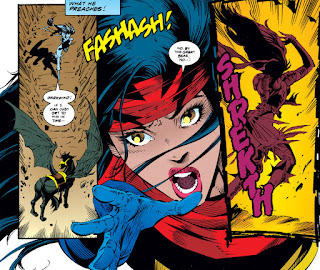 A Work in Progress
With Cable in Israel helping the X-Men, Cannonball takes the opportunity to attempt to find Sunspot, missing since issue #28, by hooking up Cerebro to Cable’s time-displacement core. 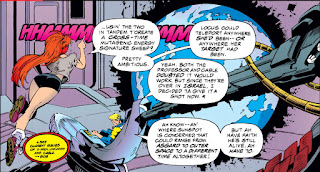 The Grim 'n' Gritty 90s
One of the songs playing at the club Rictor & Shatterstar visit to is said to be "Sabotage" by the Beastie Boys.

Young Love
Rictor & Shatterstar go out clubbing; Shatterstar gets hit on, but just wants to be left alone, all of which takes on new meaning in light of the pair’s later relationship. 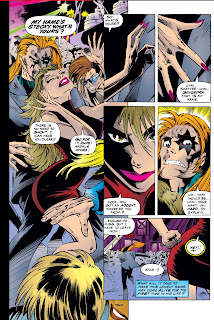 It’s also revealed that both Rictor & Shatterstar are virgins, but that Shatterstar is, in the parlance of Mr. Data, “fully functional”. 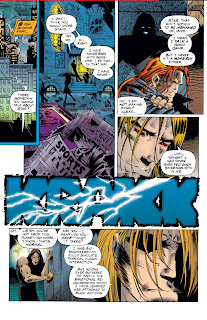 Austin's Analysis
In part because everything plot-related that happens in this issue more or less gets swept under the rug in the transition out of "Age of Apocalypse" and the arrival of Jeph Loeb, but mostly because this issue functionally represents the end of Fabian Nicieza's work on X-Force, it's worth taking a moment to step back and appreciate all he's done for the book. That a series which was launched as a vehicle for some of the worst excesses of the 90s/Rob Liefeld has become as character-focused and as much a proper legacy title for the former New Mutants as it is at this point is pretty much all attributable to Nicieza. In much the same way Louise Simonson came onto X-Factor and managed to slowly but surely move the series out of its ill-advised initial setup, Nicieza took the collection of excessive pouches, big guns and gritted teeth that was early X-Force and turned it into a highly readable & entertaining continuation of New Mutants with actual characters and compelling conflicts, all without (for the most part) jettisoning the more Liefeldian elements of the early series.

A perfect example comes, appropriately enough, in this issue, as we find ourselves genuinely interested in and concerned with the emotional development of Shatterstar, a character who, shortly after his introduction, ran himself through with a sword suddenly longer than his own body in order to stab somebody behind him. It would have been easy for Nicieza, once Liefeld departed, to simply jettison his more outlandish, one-dimensional characters and focus on the former New Mutants, but instead, Nicieza did the work to develop those Liefeld originals into actual characters (while also bringing back New Mutants stalwarts like Sunspot, Rictor & Dani Moonstar). The upcoming run by Loeb, as well as those by future writers, have their shares of ups and down, but the fact that X-Force, as a team/concept but especially these characters, from long-standing former New Mutants like Cannonball & Sunspot to later additions like Cable & Shatterstar, outlasted 90s contemporaries like Rage, Darkhawk and Vengeance to continue to be featured in stories to this day, can be largely credited to the work done by Fabian Nicieza. Work which, unfortunately, ends here.

Next Issue
Tomorrow, Excalibur gains a little Wisdom in Excalibur #86. Next week, Generation X #4 and Cable #20!