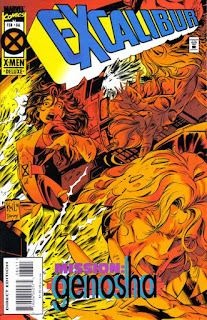 In a Nutshell
Pete Wisdom debuts as Excalibur heads to Genosha.

Plot
In Thailand, in the wake of a disastrous mission, British Intelligence operative Pete Wisdom decides to quit. Later, on Muir Island, Brian Braddock finishes work upgrading Moira's hovercraft to serve as Excalibur's chief mode of transport, which he dubs the Midnight Runner. Just then, agents of British Intelligence's Black Air organization arrive, along with Pete Wisdom, and enlist Excalibur's help in going to Genosha alongside Wisdom to help settle the war still raging between the humans and mutates. Despite feeling like they're being played, Excalibur agrees to go. As they arrive in Genoshan airspace, Kitty questions Wisdom, and he reveals that conditions in Genosha are far worse than they believed, with both sides of the conflict suffering massive starvation. Just then, rockets pepper the Midnight Runner, sending it crashing to the ground as all of reality crystallizes, then shatters.

Firsts and Other Notables
Pete Wisdom, the snarky, world-weary Intelligence operation with the mutant ability to generate "hot knives" from his fingertips, makes his first appearance in this issue. Wisdom is arguably the most notable/infamous thing to come out of Warren Ellis' Excalibur run, as the character will eventually become involved in a questionable relationship with Kitty Pryde while also functioning to varying degrees as a Mary Sue/authorial mouthpiece. 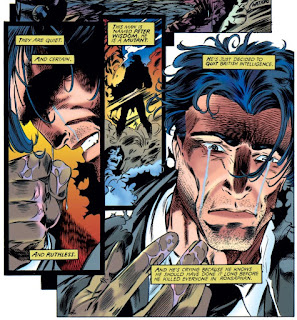 Much to her initial dismay, Brian re-purposes Moira’s hovercraft into a new X-jet in this issue, which he dubs the Midnight Runner.

Black Air, an arm of British Intelligence that has replaced the defunct WHO, debuts in this issue; they will be a recurring presence throughout Ellis’ run (much in the way Alan Davis used WHO during his run). 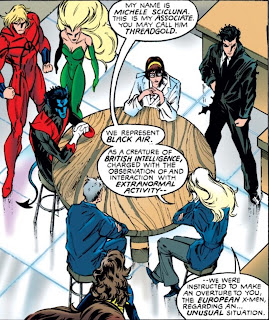 They sends Excalibur to Genosha due to an outbreak in violence between humans and mutants that could involve ammunition manufactured in Britain, though Ellis continues to display his ignorance or lack of concern with continuity, as no reference to the recent "Bloodties" or Genosha-set X-Factor stories are made (for example, "Bloodties" seemed to end with the human/mutant violence dying down; here it's suggested the fighting has been going on for some time).

Black Air was also suggests the Braddock family has connections to Genosha; I don't think anything ever comes of this.

The Legion-triggered crystallization wave destroying all reality hits Excalibur as the Midnight Runner is crashing, sparing the group from dying in a fiery plane wreck, at least. 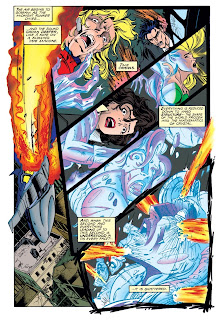 A Work in Progress
Brian - despite still having flashes of the future from his time in the timestream - is talking much more normally. He also mentions relishing getting in touch with his physics roots while working on the jet, a rare acknowledgement of his original scientific roots.

Ellis carries over the “Rory is afraid he’ll become Ahab” subplot, as he declines going to Genosha out of fear of being hurt by a mutant and starting down the path towards becoming Ahab. 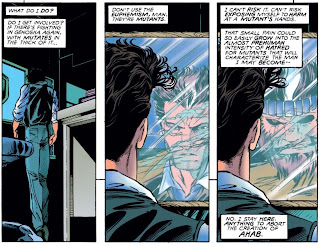 Nightcrawler realizes Moira is infected with the Legacy Virus in this issue, though he deduces this in part by stating she and Rory are the only humans on Muir Island; technically, Captain Britain is human as well (though Ellis will routinely handle him like he's a mutant throughout his run). 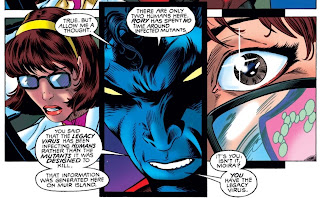 Xavier’s absence from Muir Island is attributed to the events of “Legion Quest”.

Kitty & Pete Wisdom have their first encounter, and the sparks fly! 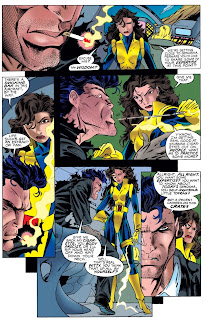 Human/Mutant Relations
In a brief glimpse of Genosha, we see that humans and mutants alike are starving as a result of their sustained conflict. 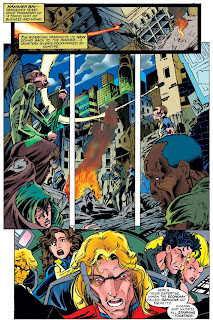 It's in the Mail
A response to a letter promises the untold tale of Darkoth losing the Soulsword will be told in next year’s Excalibur annual; there is no Excalibur annual next year, or ever again.

Austin's Analysis
Though his run began three issues ago, and the plot beginning here is ultimately interrupted by "Age of Apocalypse", this feels like the proper beginning of Warren Ellis' run on the book, as it is the most in line with the tone and kinds of stories that will characterize his work on the series. Not just because it introduces Pete Wisdom, his most significant addition to the mythos and pet character, but also because the level of world-weary snark Wisdom brings with him is very much of a piece with what becomes Ellis' trademark worldview. It also returns a very British tone to the book (combined with the general thrust of this story involving the British government trying to rectify colonial sins without actually addressing them directly), something largely lacking since Alan Davis' departure (who brought a different but still very British sensibility to the series). Excalibur is at its best when it embraces its British-ness (the better to set it apart from all the other X-books), and while it remains to be seen if Ellis' particular style of cynical, smoldering cigarette, eyes-red-from-a-hangover British-ness is a good fit with the brighter, more traditional superheroics of characters like Kitty & Nightcrawler (or how long before his schtick wears thin), just having a distinctive creative vision on the series again is refreshing.

Next Issue
Next week: the kids go Christmas shopping in Generation X #4, and Cable says goodbye to reality in Cable #20!