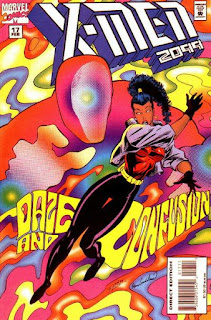 In a Nutshell
Halloween Jack makes his move in Las Vegas while Krystalin gets caught up in family drama.

Plot
Meanstreak & Halloween Jack arrive in Las Vegas, and confront Desdemona Synge, but she calls for help in the form of the Rat Pack. In Oakland, Krystalin's brother Zak urges her to leave the X-Men and join his Soldiers of the Panther, but they are interrupted by Daze, an agent of the Free Radicals, who kidnaps Zak and demands the release of a prisoner named Billy the Kid. In Vegas, Meanstreak & Halloween Jack defeat the Rat Pack, then Halloween Jack touches Desdemona in order to replicate her physical form, at which point he uses her palm print to transfer her casino resources to him. Elsewhere, Bloodhawk returns from the Savage Land and reunites with Liebowitz, then leaves to return to his desert home. In Oakland, the Panthers ask Krystalin to let them handle Zak's kidnapping themselves, but she decides to investigate anyway. With the help of an old family friend named Havana, she tracks down the location of the Free Radicals' base. Meanwhile, Cerebra tells Fitz that she's managed to stop the cellular degeneration of Zhao's X-Men. After she leaves the room, three shadowy figures teleport inside, on orders to bring the frozen X-Men to the Director.