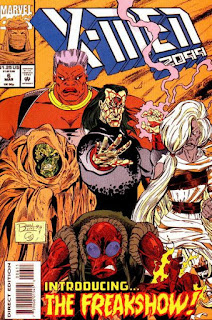 In a Nutshell
The X-Men battle the Freakshow

Plot
As Meanstreak, Krystalin, Bloodhawk & Fitz fly back from New York, Bloodhawk once more bids adieu to the team and flies off, followed shortly thereafter by Fitz, who recklessly jumps out of the craft after Bloodhawk. Disgruntled, Bloodhawk gets him safely to the ground, albeit in the desert still miles away from the rest of the X-Men. Eventually, Fitz comes across a meditating Xi'an, and together, they return to the X-Men's camp. There, the X-Men intercept a transmission from someone calling herself Mama Hurricane. Xi'an hopes this is the same Mama Hurricane who helped mutants during the Great Purge, as she may be able to help him find more mutants. After he dispatches Krystalin on a separate mission, he and the rest of the X-Men track Hurricane's signal to an abandoned town in Arizona. There, they encounter the Freakshow, a group of genetically modified Degens. When Xi'an asks after Mama Hurricane, a fight breaks out, during which Metalhead is infected with a disease by Freakshow member Contagion, prompting Xi'an to confront Breakdown, the Freakshow's leader, and remove the glove from his "destruction" hand.