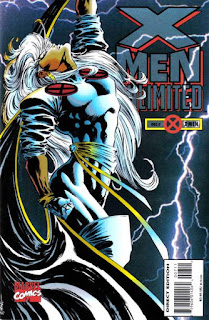 In a Nutshell
Storm, Gambit & Phoenix are caught in a power struggle between Candra & Storm's old mentor.

Plot
Storm, accompanied by Gambit & Jean Grey, arrives in Cairo at the behest of her dying mentor, Achmed El-Gibrar. At the same time, Candra arrives, with designs on exploiting the latent power of one of Achmed's current urchins, Jamil, whom Candra's associate Bond has been following. When Storm meets with Achmed, he makes her promise to look out for Jamil, but Jamil decides to ally himself with Candra, and leaves Achmed's side along with a fellow urchin named Karima whom they capture. To honor her promise to Achmed, Storm challenges Candra to a duel for Jamil. As Gambit battles Bond, Storm fights Candra. The woman are evenly matched in terms of power, but Storm's experiences on the streets allow her to sucker punch Candra, winning the fight. But Jamil declares he still wants to remain with Candra, and Storm is forced to return to Achmed only with Karima. But Achmed tells her she has succeeded in honoring her promise. As he dies, he declares that Karima will be the new leader of his gang of young thieves, and Storm calls forth a massive storm to honor her fallen teacher.

Firsts and Other Notables
Candra, the External who debuted in the Gambit miniseries, serves as the villain of this story. She'll next appear in the Rogue miniseries.

Master thief Achmed El-Gibrar, the man who taught Storm all she knows about thievery, lock-picking, etc., dies in this issue. 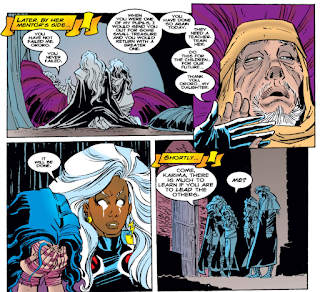 Jamil & Karima, the two young thieves working under Achmed who are fought over in this issue, will return in Adjectiveless X-Men #60-61.

As with previous issues of this series, this concludes with a pinup gallery. 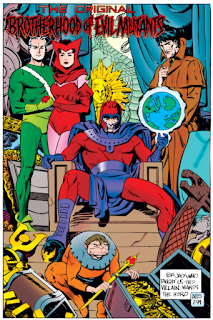 Creator Central
John Romita Jr., presumably fresh off having Uncanny X-Men snatched away from him by Joe Madureira, draws this issue; Steve Epting provides the cover.

A Work in Progress
Storm recalls her Dickensian upbringing on the streets of Cairo. 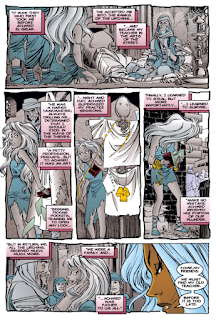 Gambit spends the early part of the issue suggesting Jean can’t handle the streets, something which she rightly admonishes him for later. 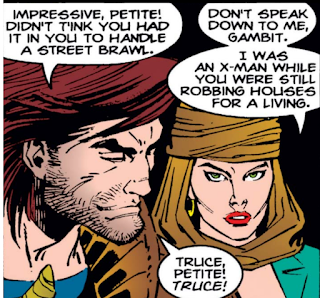 In an echo (intentional or not) Storm duels Candra for the life of Jamil, ultimately defeating her via her hand-to-hand skills rather than her powers. 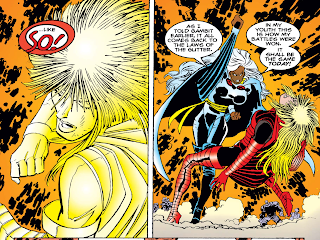 Austin's Analysis
The series continues to flirt with narrative irrelevancy (in those terms, this is probably a step up from last issue's Savage Land adventure, but the death of Storm's little-seen mentor isn't exactly a significant event), but as it does so, it continues to tell engaging, self-contained stories featuring smaller groupings of characters that aren't often featured together in the monthly series. Here, we get Storm & Gambit, reunited on the strength of their shared skills in thievery, the very thing which brought Gambit into the X-Men's fold in the first place (all of which, to Howard Mackie's credit, goes unstated in this issue), with Jean Grey tossed in, seemingly at random (Gambit should, by now, be well aware that Jean can hold her own, but Storm at least points this out). And while even Fabian Nicieza seems to have put the Externals to bed at this point, Mackie's use of Candra here draws little on her status as an External and follows somewhat logically from her role overseeing the Thieves and Assassins Guilds in his Gambit mini. And, of course, John Romita Jr. is always a welcome sight. So while this issue isn't introducing a new character or launching a new plotline, it's still an opportunity for Storm to reflect on her past, coupled with some well-drawn action in which all the characters involved are given room to breathe, and there's nothing wrong with that.