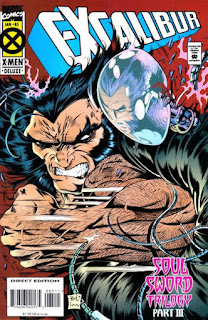 Plot
As Nightcrawler urges Kitty to hand over the Soulsword, Shrill reveals that Gravemoss is in control of his body. She then blasts Nightcrawler, and Kitty uses the distraction to phase away. With a moment to herself, Kitty returns the sword to her body and remembers the training she received from Wolverine. When Gravemoss teleports into the room, Kitty attacks him. Overwhelmed, Gravemoss teleports to Nightcrawler's room. Realizing his body possesses knowledge of swordfighting, he draws a sword and returns to Kitty, forcing her to draw the Soulsword to defend herself. Using Nightcrawler's skills, Gravemoss defeats her, but Shrill intervenes again, along with a still-alive Amanda, which gives Kitty an opening to use the sword to do what it does best: break enchantments, thereby expelling Gravemoss from Nightcrawler's body. Kitty hands over the sword to Amanda, who in turn gives it to her mother, only to discover that with the defeat of Gravemoss, Margali's position on the Winding Way has improved.

Firsts and Other Notables
The Soulsword Trilogy concludes with this issue, leaving the titular sword in the possession of Amanda Sefton's mother Margali, who has used the entire situation to improve her position on the Winding Way. Both Margali and the Soulsword will return later in Ellis' run. 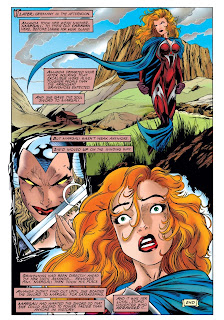 Meanwhile, this issue marks the final appearances of Gravemoss & Shrill to date.

Preparing for Gravemoss’ attack, Kitty flashes back to a time when Wolverine trained her in an Israeli martial art, which essentially serves as a gratuitous way to work Wolverine into the story (and enable him to be on the issue’s cover). 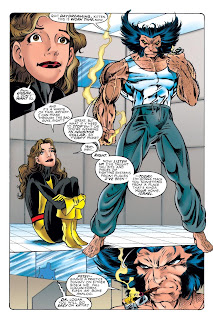 Ken Lashley returns this issue, making it the only chapter of the three part story drawn by the book’s nominal regular penciler.

A Work in Progress
Shrill is able to see that Gravemoss is possessing Nightcrawler thanks to her Soulsteel eye. 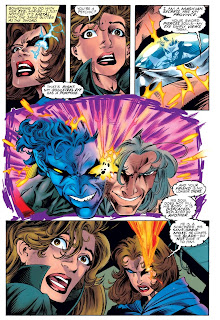 Wolverine considers Mossad the scariest secret service in the world.

Amanda says that there is less of Illyana in the Soulsword than in a photo or piece of clothing, which is just wrong, In her (and Ellis’) defense though, Amanda is essentially trying to get the sword from Kitty as much as Gravemoss or Shrill, so she may be intentionally misleading her.

The Reference Section
Kitty yelling “get out of my friend!” Every time she hits the Gravemoss-possessed Nightcrawler just makes me think of Bobby Hill yelling “That’s my purse/I don't know you!” as he kicks people in the crotch. 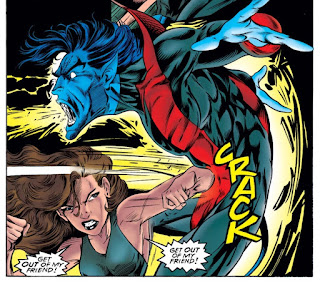 Echoes of Watchmen as Kitty tells Gravemoss she’s not trapped with him, he is trapped inside with her. 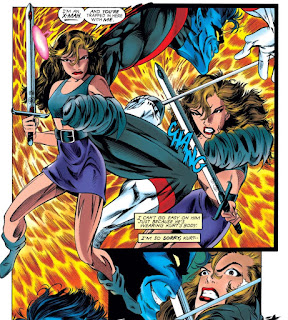 Austin's Analysis
Warren Ellis' introductory story arc concludes with its strongest issue, largely because Kitty Pryde is, for the most part, the agent of her own victory by successfully defending herself against Gravemoss and handing over the sword to an ally. While this issue still features the same weaknesses as the previous chapters (Ellis still has a good knack for dialogue but a poor one for continuity, and this issue - and the story as a whole - concludes as abruptly as the previous ones, with Shrill just disappearing and only a page of denouement, providing no resolution as to the fate of the rest of the team), and the story on the whole suffers from the rotating artists creating a visual incoherence to the story (each individual's work is fine, but the transition from each issue can be jarring), this is nevertheless easily the best story in the book since Alan Davis left. Ellis' introductory arc is far from perfect, but there's a level of craft and potential for even better things on display that the series has been lacking for months, and thankfully, this is just the beginning of his run.