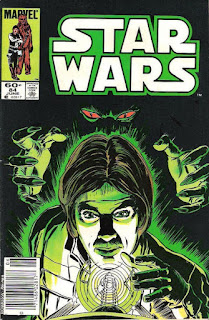 In a Nutshell
Han & Chewbacca discover the lost planet of Seoul 5.

Plot
After a string of luck playing cards, Han is facing down an old man who wages a crystal he claims comes from the lost Seoul system, along with a map to the planet where he found the crystal.  Intrigued, Han agrees to play & beats the man, who accuses Han of cheating, prompting him and Chewbacca to race out of cantina after the other gamblers Han beat turn on them. Out the funds they'd so recently won, Han decides to investigate the old man's claims and follows his map to Seoul 5. Landing on the outskirts of the city, Han proceeds by himself, soon discovering an Imperial presence on the planet as well. Ducking the Imperials, Han ends up inside a room filled with crystals like the one he won from the old man. With Stormtroopers in close pursuit, he goes deeper into the chamber & discovers a pair of archaeologists whom the Empire has captured in the hopes of using their knowledge to weaponize the crystals. They tell him the crystals were the source of the Seoularians' energy, and that he possess the control crystal. Han is able to use it to escape the Imperials along with the scientists, but in the process, he reunites all the crystals, which creates a massive energy buildup. Realizing the danger, he and the archaeologists race back to the Falcon, and manage to get off the planet just before it explodes. The scientists are saddened by the loss of the crystals, but glad the Empire won't be able to use them.

Firsts and Other Notables
This another fill-in/inventory issue (somewhat massaged to fit after Return of the Jedi) featuring an adventure of Han and Chewbacca. It is written by Roy Richardson, a name I hadn't encountered before. Happears to be mostly an artist, primarily an inker; this is his only writing credit. He also draws this issue's cover.

The story occurs in the wake of Han having completed a mission similar to the one Luke was sent on in issue #82, inviting a world to participate in the Galactic Congress being setup by the Alliance (that is all presented via a caption at the start of the issue; nothing in Han's dialogue or the plot of the story connects to it at all).

Similarly, while there is a contingent of Imperial forces operating on Seoul 5,  narrative caption says they are continuing their dead emperors search for wealth & power on order of the Imperial governors, which seems like a pretty obvious patch to make a pre-Jedi inventory story fit the post-film continuity. 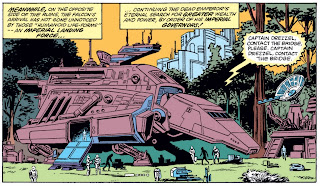 Working with the Imperials is a the humanoid cat-like Ssssk, who possesess telepathic & telekinetic powers. Jaxxon aside, he is a bit more anthropomorphic that most Star Wars aliens, while his mental abilities are more overtly comic book-y than, say, what Vader & Luke do via the Force. 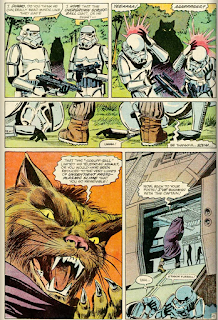 The gambler Han gets the map to Seoul from days he discovered the world while serving as part of an Imperial exploratory mission; both the EU and current canon have established exploring the Unknown Regions as an obsession of Palpatine’s, something this unintentional speaks to as well. 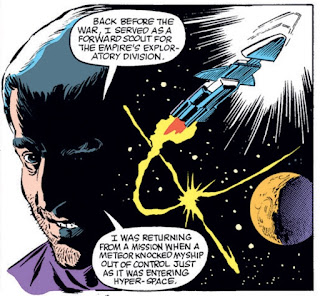 A Work in Progress
It's not explicitly called Sabaac, but the game Han plays to win the Seoul crystal & map seems loosely consistent with what we know of that game (Han also pulls the classic "that's the best hand we've had all night/until now!" move by beating the second best possible hand with the best possible hand). 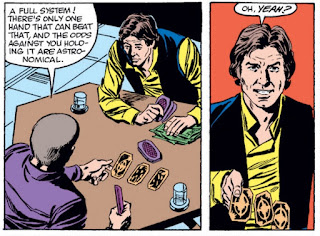 In light of Han’s money problems mentioned in issue #81, it’s worth noting that he and Chewie manage to successfully win a bunch of money gambling at the start of this issue, but are forced to abandon it when they’re run out as cheaters. 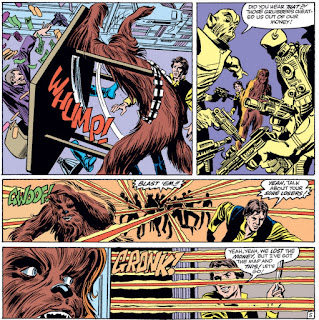 Han declares he’s got a "bad feeling" about Seoul 5.

Um, Actually
A statute on Seoul 5 references the planet Notron as the cradle of humans in the galaxy; this will later be established as an ancient name for Coruscant. 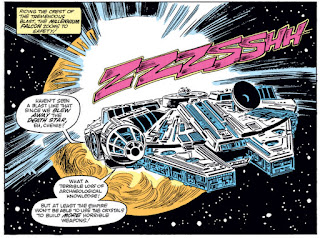 It's in the Mail
A response to a letter in this issue teases the upcoming return of Shira Brie.

Austin's Analysis
Though Tom Palmer is on hand to help keep the look consistent, this is clearly yet another inventory issue, and unlike last issue, which was relatively harmless in terms of chronology, this sticks out as one in a much more obvious manner. There is, of course, the presence of Imperial troops on Seoul 5, but even beyond that, Han's characterization is much more consistent with his pre-Empire devil-may-care scoundrel approach to things. It's never stated explicitly in the dialogue, but it's easy to imagine this Han lamenting the loss of his gambling winnings at the beginning because he needed the money to clear his debt with Jabba (and Han's satisfaction with receiving a kiss from one of the rescued scientists at issue's end doesn't really gel with his more domesticated persona in Jedi, where he's clearly deeply in love with Leia). So once again, the series is treading water and looking back at a time when it arguably has the most creative freedom to drive forward, and while it was easier to excuse the previous issue, this one is just too much of the same from a character - and series - that should be moving past these kinds of stories.

Next Issue
Both Duffy and Drebble return!