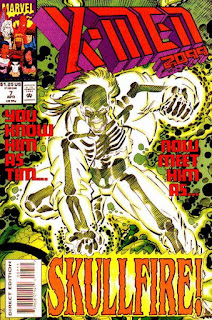 In a Nutshell
The X-Men meet Mama Hurricane

Plot
The fight between the X-Men and the Freakshow is brought to a halt by the arrival of Mama Hurricane and her associate Rosa. Elsewhere, Krystalin arrives at the home of Victor Ten Eagles, the person Xi'an sent her to contact. Back in Iron Horse, Mama Hurricane brings the X-Men into her base of operations, where Cerebra realizes that Rosa is pregnant with a mutant as Xi'an attempts to heal Metalhead of the disease with which Contagion infected him. Later, Hurricane confirms she is the same person who helped shepherd mutants to the sanctuary of Avalon during the Great Purge. Just then, a group of armored Trackers, seeking the Freakshow, attack the base, but working together, the X-Men & Freakshow fight them off. Afterwards, Xi'an declares he is going to find Avalon. Meanwhile, Victor Ten Eagles shows Krystalin the reason she was sent to him: a shadowy figure flying in the night sky, bearing an uncanny resemblance to Archangel.