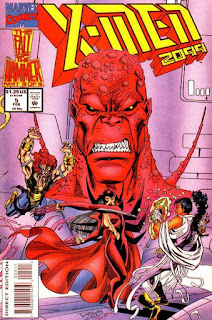 Plot
As Fitz escapes from Alchemax's security forces, on Valhalla, floating above New York City, Meanstreak, Krystalin & Bloodhawk are confronted by Heimdall. He takes out Meanstreak & Bloodhawk, but Ravage helps Krystalin escape. Below, as the crowd cheers the return of Thor, Fitz commandeers an aircab to get up to Valhalla, recalling how the X-Men arrived in the city and were caught by Alchemax at the apartment of Meanstreak's friend Jordan Boone, prompting the group to split up & Fitz to be captured. As the cab climbs higher, it suddenly gives out, but someone grabs Fitz to prevent him from falling to his death. On Valhalla, Loki appears before Meanstreak and offers to disable the neurotech that gives Heimdall his powers, allowing the X-Men to knock him out. Loki then reveals himself as Boone, having undergone Alchemax' genetic restructuring process to gain powers for himself. Just then, Fitz arrives, along with his rescuer, Dr. Doom. Fed up with the environmental harm being done by Valhalla, Bloodhawk takes to the sky, intent on destroying it, only to be blasted down by a bolt of lightning hurled by an angry Thor.