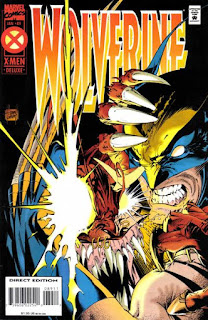 In a Nutshell
En route to the X-Mansion, Ogun returns.

Plot
Wolverine arrives on the outskirts of New York City, on his way home to the X-Mansion, when he is intercepted by Ghost Rider, who tells him his old mentor Ogun has returned. He follows Ghost Rider to a museum, passing through carnage in the streets triggered by Ogun's presence. Inside the museum, they discover Ogun's demon mask, which Wolverine had destroyed, as part of an exhibit on Japanese martial culture. Just then, the mask connects with a suit of armor on display, manifesting Ogun, who attacks Wolverine. Ogun taunts Wolverine to unleash the beast inside him, but Wolverine recalls how Ogun had taught him to balance the man and the beast within, and with Ghost Rider's help, manages to destroy Ogun's mask once more. He briefly sees that the figure inside the armor looks like him, before it fades away, the armor collapsing. Wolverine explains to Ghost Rider that the figure wasn't really Ogun, just his spirit, reaching out from beyond the grave to attack him with a piece of himself. Meanwhile, at the X-Mansion, Gambit taunts Sabretooth with the fact that Wolverine will be returning soon; unimpressed, Sabretooth tells Gambit to tell the runt he's waiting for him.

Firsts and Other Notables
Ogun, Wolverine's former sensei who debuted, tried to corrupt Kitty Pryde, and died in the Kitty Pryde & Wolverine miniseries, returns briefly in this issue as a sort of ghost. Despite ending this issue seemingly dead once again, he'll pop up again in a few more places through the years.

Ghost Rider, making his first appearance in this series but with a history of teaming up with Wolverine already, guest stars in this issue, whereby "guest star" = "brings Wolverine to the museum" and "knocks over a sword at one point".

Wolverine returns to New York, on his way back to the X-Mansion, a decision he says is motivated by his encounter with Maverick in issue #87. 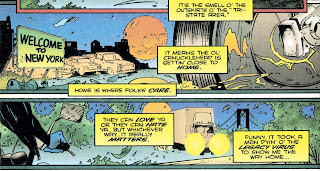 Linus Dorfman, the serial killer Wolverine battled in issue #43, gets name-checked in a news segment playing in the background when Gambit is taunting Sabretooth. The "background news featuring Linus Dorfman" bit will carry over into the next issue. 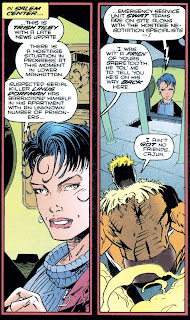 The Chronology Corner
Gambit appears here after issue #87 and before X-Men Unlimited #7.

A Work in Progress
Ahead of Ogun’s return, Wolverine provides a recap of the climax of the Kitty Pryde & Wolverine miniseries. Even though the flashbacks are color faded and drawn/swiped by Laguna, they still look better than the originals. 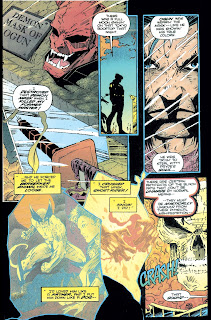 Artistic Achievements
With Laguna in art, swipes abound once more (I’m pretty sure this one is from Art Thibert in X-Men #12 or 13). 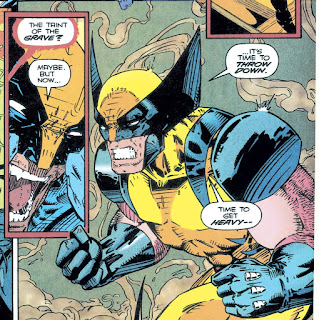 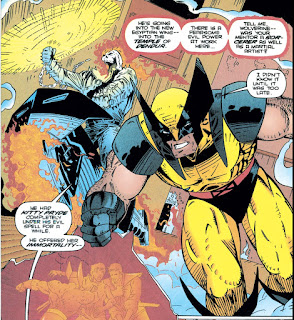 Austin's Analysis
It's hard to read this issue (and the previous one, frankly) and not come away feeling like it's filler. Issue #87 did a good job of establishing a motivation for Wolverine to end his self-imposed, post-adamantium exile and return to the X-Men, but it seems pretty clear that it was decided his actual homecoming had to occur in issue #90 (the series' last pre-Age of Apocalypse issue), which meant Hama had some time to kill (and, of course, the art doesn't help combat the "filler" feeling; last issue had a bit of Kubert in it, but this is all Laguna and his back lit figure work). So while Wolverine's first encounter with Deadpool and a return engagement with Ogun aren't entilrey without note, everything that happens in these two issues is so rushed and ephemeral (no explanation is given for how or why Ogun returns, for example) that it's hard to shake the feeling that they're just killing time for something bigger and better.