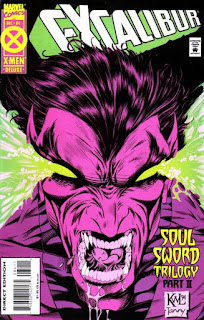 In a Nutshell
Gravemoss & Shrill descend on Muir Island seeking the Soulsword.

Plot
Kitty, possessed by the Soulsword, attacks Moira, but is knocked out by Britanic. Meanwhile, the emergence of the Soulsword has allowed Shrill to find its location, and she sets out for Muir Island to destroy its holder. On Muir, Amanda Sefton returns and is greeted by a Gravemoss-possessed Nightcrawler; he throws her off a cliff into the sea. Inside, Moira, Xavier & Rory Campbell theorize that the Soulsword must have transferred to Kitty when Illyana died, but before they can figure out a way to separate her from it, the fire alarm in Douglock's room goes off, triggered by Gravemoss having set the techno-organic being on fire. Down in the medbay, Kitty awakens and draws the sword once more, only to discover a pained Shrill waiting for her, declaring her intent to kill Kitty to destroy the sword. Just then, Gravemoss-as-Nightcrawler, having knocked out the rest of the team, teleports into the room and urges Kitty to give him the blade.

Firsts and Other Notables
The first words that appear in this issue state Illyana Rasputin had a sword which drove her mad, which is just flat wrong, and is a suitable herald for just how much Ellis (either on his own or working off Lobdell's notes) completely mispresents the relationship between Illyana and the Soulsword in this story.

Similarly, later in the issue, Xavier & Moira seemingly pinpoint the moment, just before young Illyana's death in Uncanny X-Men #303, that the sword transferred to Kitty. Except that Illyana's existence was due entirely to a paradox wherein in the teenage, Soulsword-wielding Illyana prevented herself from ever going to Limbo (thus, that young Illyana would have no access to the Soulsword, because she didn't grow up in Limbo, learn magic, and forge it). 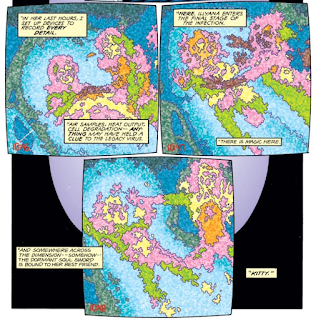 To that point, the sword of the (now non-existent) teenage Illyana already transferred to Kitty (in Excalibur #7-8) upon her "death", after which it fell into the hands of first Dr. Doom and then the demon Darkoth (in Excalibur #37-39), a possession which is referenced in this issue by Shrill (who says she tried to steal the blade from its last holder in a tale that has yet to - and never will - be told), meaning this issue is both acknowledging (after a fact) that the Soulsword went from Teen Illyana to Kitty to Doom to Darkoth, while also stating that it transferred to Kitty just recently, upon the death of Young (powerless) Illyana.

Creator Central
Daerick Gross, an artist who worked mostly on independent books, draws this issue; he'll return for issue #88 but that's about it for his X-office work.

A Work in Progress
Britanic says he’s killed before. I’m not sure if that’s consistent with something from his UK Solo series, but I don’t recall anything from earlier in this series in which he killed someone.

He’s also talking less Shakespearean, something Moira points out, as Ellis begins walking back the whole Britanic thing. He also points out that before becoming Captain Britain, he was a physicist, something that is often forgotten. 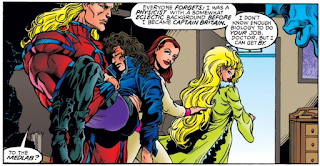 Meghan seizures are attributed to her elemental nature reacting to the presence of Gravemoss.

Intentional or not (likely not), the scene where the Gravemoss-possesses Nightcrawler meets Amanda is reminiscent of the pervert Nightcrawler from Belasco’s Limbo, in the issue where Illyana was aged into a teenager. 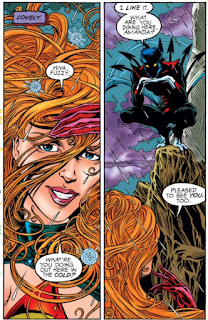 Austin's Analysis
To both its credit & detriment, this issue follows on pretty directly from the previous one, continuing both the story's strengths and weaknesses. Once again, it ends rather abruptly, as though Ellis simply ran out of pages, rather than rising to some sort of climax or transition point (the reveal of the unconscious Excalibur at the end is repeating same beat as the earlier seeming-death of Amanda, robbing it of some of its punch), and it becomes clear that Ellis is hardly familiar with the history of the Soulsword and how it worked, with the issue contradicting itself on the matter and flatly misstating information about it (which, ultimately, Ellis is credited the writer so that's on him, but he's also working off a story idea from Scott Lobdell, and some combination of Suzanne Gaffney & Bob Harras deserve demerits for not, you know, editing his story and getting him to address or fix the inconsistencies).

But this issue also showcases Ellis' knack for dialogue, with each character actually sounding like a distinct individual, something the series has been sorely lacking since Alan Davis left. Ellis may not have the strongest handle on continuity, but it's clear just from the dialogue that Gravemoss-as-Nightcrawler is different from regular Nightcrawler, while its possible to read Kitty's dialogue and tell when she's being possessed by the Soulsword and when she's not, even independent of any additional visual cues. So while he may still be finding his feet on a macro level, with this issue Ellis continues to show his chops on a micro level, at least.