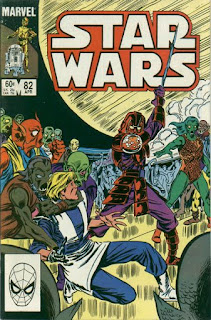 In a Nutshell
Luke returns to Iskalon on a diplomatic mission.

Plot
Following a training session with a group of Ewoks, Admiral Ackbar dispatches Luke on a diplomatic mission, to reach out to friendly worlds and offer them a chance to participate in the Alliance's effort to rebuild the government. Joined by Plif, Luke first travels to Iskalon. There, amongst the wreckage of the Iskalonians' former underwater city, he discovers Rik Duel, Dani & Chihido stripping the place for salvage. Luke & Plif are outraged at their insensitivity & urge them to leave, but the group is attacked by a massive sea snake. They are able to fight it off, but Plif senses it was sent to the attack them by the natives, who soon emerge from the depths and attack as well. Luke does his best to fend them off without killing anyone until the attack is halted by Kiro, who recognizes Luke. Mone, leader of the School, emerges, and Luke offers him and Iskalon a place in the new government, but Mone refuses, the School still distrustful of outsiders following Luke's last visit. Luke promises to leave, and to take Rik and his partners with him, but Kiro suddenly announces he will be joining Luke as well, having grown bored of his role within the School. With Luke's X-wing too small for a passenger, Kiro boards Rik's ship, leaving the School and Iskalon behind.

Firsts and Other Notables
This marks the first appearance of Wicket, who will go on to be the central Ewok in a variety of stories, in this series. 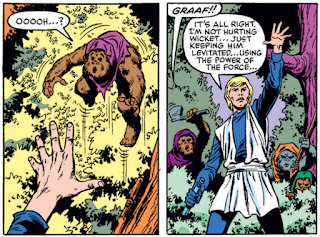 Luke debuts a new look this issue, with a white tunic over the black attire he wore in Return of the Jedi. 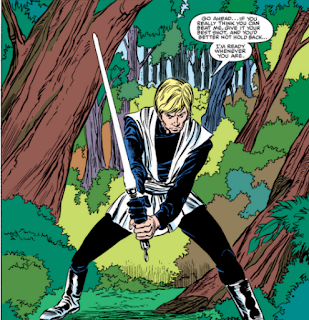 Luke is assigned a new mission by Admiral Ackbar, to serve as an ambassador of sorts on behalf of the (no longer Rebel) Alliance to planetary governments, inviting them to participate in the formation of a new galactic government. Given the pre-Clone Wars role of the Jedi revealed by the Prequels, it’s actually pretty (unintentionally) consistent with the Jedi of old, and an interesting use of Luke (compared to both the old Expanded Universe & the canonical Sequel trilogy that quickly made his post-Jedi mission one of rebuilding the Jedi by finding new students to train).

Rik, Dani & Chihido return in this issue, their first appearances since issue #72 (#73 for Dani). It struck me for the first time this issue that they're probably supposed to be darker versions of the central Luke/Leia/Han trio, but I can't quite fit everyone into that template. Rik is clearly a less-scrupulous Han, but Dani & Chihido are tougher to pin down, in part because Chihido has, up to this point, mostly just been a plot device.

Luke returns to Iskalon, the waterworld that was the central setting of issues #74-76 which ended with the Iskalonians breaking off contact with the surface world in the wake of the atrocities committed by the Empire on their world, a sentiment that hasn't softened in the intervening issues.

Kiro, the Iskalonian who fought alongside Luke during his last visit, dons a cool looking samurai-esque suit of armor that allows him to survive outside the water and decides to leave Iskalon to go with Luke, setting him on the path to becoming Luke's first Jedi apprentice. 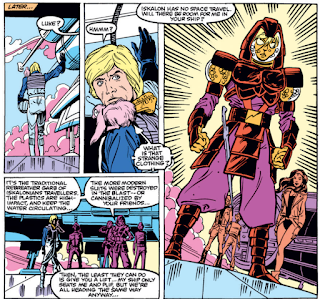 Creator Central
This issue is inked by "M. Hands", the deadline-motivated code for "Many Hands" ie a bunch of different inkers.

A Work in Progress
This issue takes place concurrently with the previous one, with Han & Leia said to be away on Tatooine.

A bunch of excuses are given for why Luke undertakes the mission alone (save for Plif); Duffy seems to get confused when it comes to Chewbacca & Threepio, either by saying “Hoojibs” when she means Ewoks, or forgetting the characters are on Endor and not Arbra. 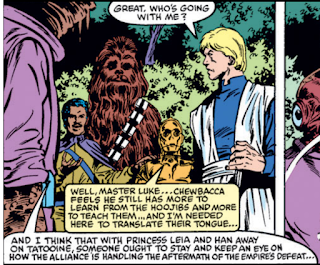 Luke says it’s not unusual for Corellians to be pirates/smugglers like Han. 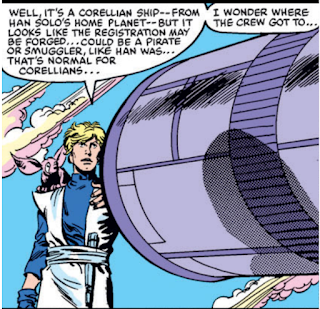 Luke gets a full page spread in this issue to show off his martial abilities, something this series doesn't highlight often enough (he should be a pretty bad ass close-quarters fighter. 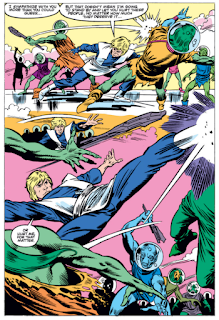 Remember The Empire Strikes Back?
Dani & Luke replay the I love you/I know call and response from Empire.

Austin's Analysis
Duffy always seems to gain a little something when she gets to play with her own additions to the Star Wars mythos. Here, she returns Luke & Plif to Iskalon, site of one of the more notable chapters in the larger "Search for Tay Vanis" story, using the goal of rebuilding the galactic government in the wake of the Rebellion's victory as an excuse to send Luke out on a diplomatic mission, which in turn leads to the return of the "Dark Trio" of Rik, Dani & Chihido, as well as Kiro, one of the standout characters from the earlier Iskalon story. It seems a little odd to give this mission to Luke, just because Leia, as an accomplished diplomat, seems like the person who should be reaching out to planetary governments, but at the same time, it is nice to see Luke's role as a (now full-fledged) Jedi used for something other than martial prowess (or at least not exclusively for his martial prowess). All in all, with this issue Duffy does an effective job balancing the various needs of the series, exploring Luke's post-Return of the Jedi role while also furthering her own comics-specific narratives, all by using the larger post-Jedi "what happens now that the Empire is defeated?" arc as the vehicle for both.

Next Issue
Lando gets the fill-in spotlight.