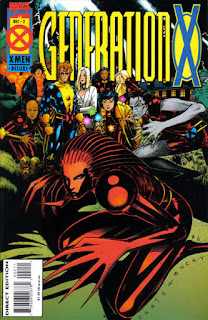 In a Nutshell
Penance escapes and Generation X gives chase.

Plot
As Jubilee confronts a silent Gateway on the roof of the school, Monet shares her deductions about Penance with Emma & Banshee, stating she believes Penance to be connected to Emplate in some way. As Paige & Skin play scrabble, an alarm sounds: Penance has slashed her way out of the infirmary. Banshee & Emma split up the students and lead search parties after her into the surrounding woods. Elsewhere, an armored figure attempts to assassinate Cartier St. Croix, only to have his armor start to fall apart. Back at the school, Banshee & Husk close in on Penance, only to fall into a trap laid by her, which results in Penance placing one of her razor-sharp fingers in Banshee's mouth.

Firsts and Other Notables
This is the first appearance of Cartier St. Croix, the father of Monet (and Emplate & Penance). He is being targeted by an (unnamed) Orphan Maker (of "Inferno"-era "Nanny and the" fame), who gets distracted when his armor starts falling apart. This is setting up a new look for the character and the return of Nanny over the next few issues. 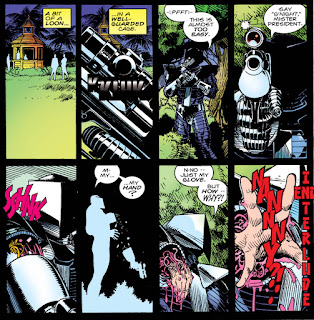 When Monet suggests she may have some answers about Penance, Banshee asks how that’s possible, unless she has mental powers she hasn’t revealed; she will, in fact, eventually be revealed to have mental powers. For now, she's simply using deductive reasoning to theorize a connection between Emplate & Penance, but that will turn out to be true as well. 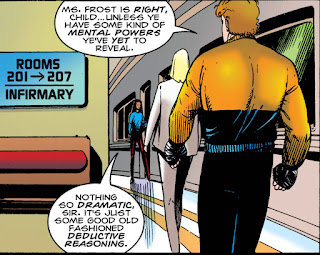 Similarly, while a narrative caption suggests Penance is from another land (where the word freedom is unknown), that doesn’t really feel with the later revelations involving Penanace, M and the St. Croix family. 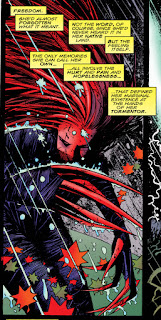 Skin asks to hang back when the team goes off in search of Penance, and Emma backs him up after Banshee objects; it will turn out he's worried about Penance cutting his (excess) skin, something Emma picks up on telepathically, prompting her to back him up so he doesn't have to admit his fear to the rest of the group. 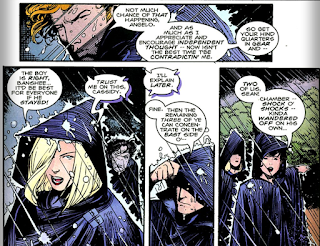 A Work in Progress
Jubilee says she’s starting to wonder if Gateway deliberated delivered her to the X-Men back in her first appearance.

Emma is unable to telepathically read anything from Penance. 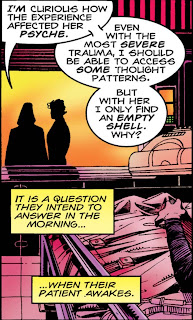 Austin's Analysis
Picking up more or less where the previous issue left off, this one suffers a bit from decompression: the plot is basically "Generation X chases Penance through the woods", and even that isn't entirely completed in the course of the issue, as it ends mid-chase, on a cliffhanger. That said, Lobdell manages to sprinkle in some character bits along the way, highlighting Paige's continued efforts to reinvent herself and suppress her more rustic roots, as well as Monet's annoying exceptionalism. He also starts to develop the Banshee/White Queen relationship that will become a highlight of the series, carrying on from their interactions in "Generation Next", with Banshee as the seasoned, somewhat humorless but warmhearted professional whom Emma enjoys needling via expressions of either her more overt sexuality or her willingness to operate on the margins of acceptable power usage (or both). And Bachalo continues to shine, using a massive rainstorm to accentuate the undercurrent of visual grotesquery that permeates the series through the design of characters like Chamber, Skin & Penance, lending a sort of claustrophobic gothic mood to the whole issue. So while there isn't a whole lot going on here in terms of plot, Lobdell & Bachalo at least continue to develop the characters and do some interesting stuff with the art to keep things entertaining.

Next Issue
Storm returns to Egypt in X-Men Unlimited #7, then Cable goes there too in Cable #18. Next week, Uncanny X-Men #320!