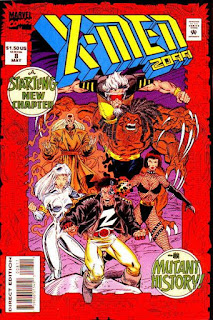 In a Nutshell
A new team of X-Men debut as the other X-Men part ways with the Freakshow.

Plot
Krystalin marvels at Victor Ten Eagles' holograms of the original X-Men, before the pair set out to track down the mysterious shadow they observed flying in the night sky. Meanwhile, Mama Hurricane & the Freakshow prepare to depart Iron Horse. In New Mexico, Krystalin & Victor visit an agricultural cooperative only to find the place ransacked, Victor's contact encased in ice and saying they were attacked by agents of Zhao. At Iron Horse, Mama Hurricane gives Xi'an a map of all the previous Mutant Underground routes, while Metalhead decides to stay with the departing Freakshow. Meanwhile, Krystalin & Victor track the cooperative's attackers to a desert compound. Inside, they're attacked by a group of apparent mutants styled after the original X-Men. Together, Krystalin & Victor are able to fight off the X-Men, but as they try to escape, Zhao himself knocks them out, declaring they are to become one of the Chosen - one of his X-Men!