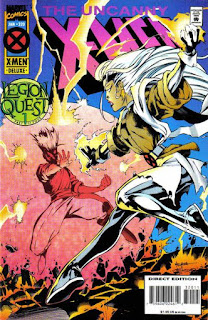 In a Nutshell
"Legion Quest" begins as Legion heads into the past.

Plot
As Legion easily overpowers the X-Men, Storm realizes the X-Men have been fooling themselves that they could overcome him. She thinks back on their meeting with Gabrielle Haller and the combined forces of Israel & Palestine, brought together in the wake of Legion creating a large black dome in the Negev desert filled with off-the-chart energy readings. With all the troops sent against him getting chewed up, Storm declares that the X-Men will take care of the situation. But now, Storm is less confidant as Legion briefly teleports her to the past, to just moments before the plane crash that killed her parents. Returning to the present, he tells her the trip was no illusion, then declares he's going back in time to mutantkind's most critical moment. Quickly, Storm orders Psylocke to telepathically link herself to Bishop, who is absorbing Legion's chronal energy. Through Bishop, Psylocke is able bring along herself, Storm & Iceman as Legion disappears into the past, leaving behind only Jean Grey, who manages to telepathically alert Xavier to the situation before passing out. Meanwhile, Shi'ar Empress Lilandra is awoken by Jahf, first guardian of the M'Kraan crystal, who declares he must speak with her. When Lilandra asks what could possibly be so urgent as to force Jahf to abandon his sacred post, he declares nothing, save the end of all that is.

Firsts and Other Notables
"Legion Quest" begins here, a five part story running between this series, Adjectiveless and one issue of Cable (with some unofficial tie-ins, like X-Factor #108-109 that led into this issue) which kicks off "Age of Apocalypse" by its conclusion. It involves Legion going back in time to kill Magneto (so as to enable his father to spend more time with Legion, since he won't have to devote so much time to fighting Magneto) and the efforts of the X-Men (both in the present and a smaller group who follow Legion back to the past) to stop him, as Legion's machinations threaten the existence of all reality.

This issue concludes with Legion traveling back in time, with Bishop, Storm, Psylocke and Iceman following along in his wake (they will remain in the past for the duration of the story). 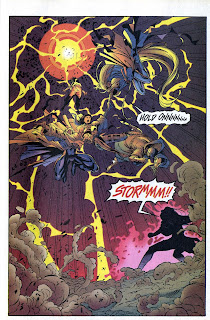 It also lays the groundwork for the "threat to all reality" stakes of the story via the return of Jahf, the diminutive (and, technically, robotic) first guardian of the M'Kraan crystal (Jahf was last seen being destroyed by Banshee, leading to the call up of the second guardian, Modt, way back in issue #108). The idea that later chapters will put forth is that, without the X-Men to contain the power of the M'Kraan crystal, unleashed by Shi'ar emperor D'Ken, at the climax of the original (non-Dark) "Phoenix Saga", it will wash over the universe, bringing everything into itself by turning reality to crystal (which ties in with the crystal motif present in the various Legion/Destiny interactions, going all the way back to Uncanny #255). Because Legion's time-traveling efforts threaten the creation of the X-Men (and will, we'll see, ultimately cause the X-Men as we know them to never exist), they thus also effect the stability of the crystal and the existence of this reality, prompting Jahf's visit to Lilandra here. 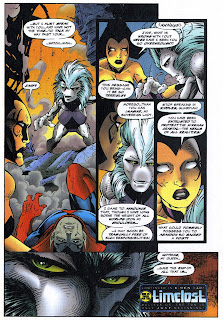 (Of course, the whole "Legion prevents the formation of the X-Men so reality is rewritten as the Age of Apocalypse" thing that is at the heart of this story isn't at all how time travel works in the Marvel Universe, but we'll get to that).

When Storm references Legion’s past history of schizophrenia, a footnote points readers to X-Men Archives, a high-end (and short-lived) reprint series from this time featuring card stock covers along with the now/standard glossy paper. It first reprints Legion’s introductory arc in New Mutants (and Uncanny #161) across four issues, then reprints some of the Alan Moore/Alan Davis Captain Britain stories before folding.

Mark Waid is credited with scripting this issue, making it his first work on one of the main X-books (he previously wrote the second Deadpool miniseries); this will eventually lead to his ultimately short-lived run as the writer Adjectiveless circa "Onslaught".

A copy of this issue with a gold logo was included with an issue of Wizard.

The Chronology Corner
This marks the third story in as many series (and across just two months) that finds Storm in the Middle East, following the contemporaneous Cable story and X-Men Unlimited #7. Obviously, since this leads right into the reality-rewrite of Age of Apocalypse, it occurs after all those other stories. But still, Storm might want to consider renting an apartment in Cairo or something.

Collection Recollection
This is one of those issues which, for whatever reason, I still have specific memories of the circumstances surrounding its purchase. Like some previous notable issues, I remember buying this at the Mall of the America (though I don't recall from which of the mall's then-three possible options it was), along with Wizard's 1994 Halloween issue (#40), while at the mall on a Friday night with my dad and a friend to see Mary Shelly's Frankenstein (the one with Kenneth Branagh & Robert De Niro as the Monster).

Young Love
The recent "for realz this time" breakup between Xavier & Lilandra (in X-Men Unlimited #5) is referenced. 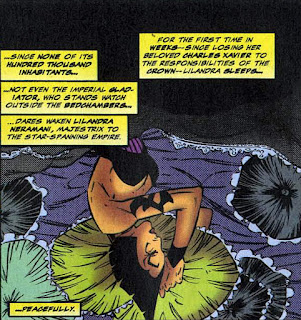 For Sale
There’s an ad for Star Trek: Generations, the first film featuring the Next Generation crew, in this issue. 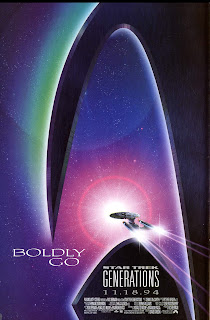 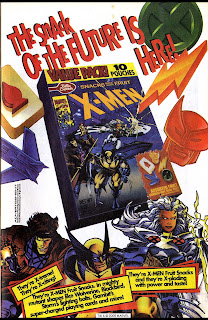 ETM lays out all the upcoming Age of Apocalypse titles (while of course promising they’ll all be priceless collectors items so why not order fifty?), including the use of “The Mutants” as a unifying title for the two X-Men replacement books that is ultimately dropped. 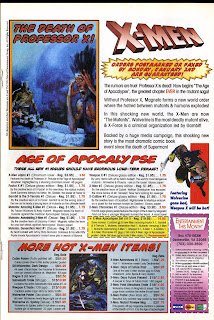 The latest iteration of the Fleer Ultra X-Men trading cards gets an ad too. 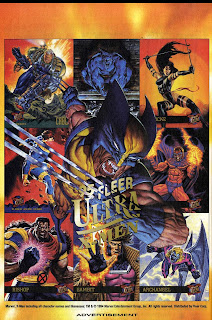 Bullpen Bulletins
The X-Facts page this month functions as a quasi letters page for the Adventures of Cyclops & Phoenix miniseries. It also teases the Age of Apocalypse version of Sunfire (in general, both this page and the main letters page continue to play coy regarding Age of Apocalypse, even though it’s just a month away, the press (like Wizard) had been covering it relentlessly, and there’s ads elsewhere in the book laying it all out. 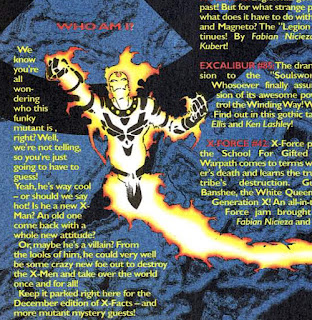 Austin's Analysis
Though it formally kicks off "Legion Quest", the story which segues into "Age of Apocalypse" and the X-line's most ambitious crossover yet, there's not a whole lot to this issue. There's no subplots, no cutaways to other characters or stories (save for the closing pages, which are really just about raising the stakes of the story). Lobdell and Waid try to shake things up a bit by cutting back and forth between the X-Men's battle in the present and the events immediately preceding it (perhaps also foreshadowing Legion's time travel in the process), but for the most part, this is just 22 pages of the X-Men fighting Legion.

Which is fine. In terms of "Legion Quest", this issue has two jobs: establish Legion as a significant threat, and pull the trigger on the plan Legion's been going on about for a couple months in X-Factor (and X-Men). And for the most part, it accomplishes those goals. It concludes with Legion going back in time, and the events leading up to that do a lot to sell the idea that a fully-integrated Legion is a powerhouse threat, as he doesn't so much defeat the X-Men as not even bother to pay attention to them (in this way, the lack of cutaways help reinforce the threat: Legion is such a big deal, the X-Men's efforts to stop him deserve our undivided attention). So while this issue can be accurately described as little more than "the X-Men fight Legion", it at least presents that plot pretty effectively.