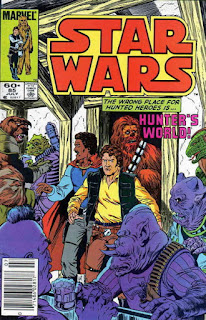 In a Nutshell
Han, Chewie & Lando run afoul of Drebble and the Lemo/Sanda Gang.

Plot
While Drebble rages against being conned by Lando, on Endor, Lando learns that the Alliance is declaring Drebble a hero of the Rebellion, thanks to all the actions Lando took in his name (hoping to cause problems for him). Mon Mothma also announces another series of diplomatic missions to invite worlds to help form a new galactic government, prompting Han & Lando to volunteer for a mission to Keyorin. After landing on the bounty hunter-friendly, Han & Lando run into both Drebble & members of the Lemo & Sanda gang Lando conned, still searching for the Dancing Goddess statue. Drebble gets the drop on the Han & Lando, turning Han over to the Lemo/Sanda gang & taking Lando aboard the Falcon. Han, realizing Lemo & Sanda won't recognize Lando since he was in disguise when he conned them, direct them towards the Falcon, then escapes with Chewie's help. On board the Falcon, Drebble hears the Alliance proclamation calling him a hero and making him a captain in the Alliance. When the Lemo/Sanda gang descends on the ship, looking for the Dancing Goddess, Drebble joins Lando defending the Falcon until Han, Chewie & Drebble's allies arrive to turn the tide. Pleased with his heroic actions, Drebble lets the Rebels go, and Lando gives him a reward: the Dancing Goddess statute.

Firsts and Other Notables
Thanks to Lando’s constant use of his name as a cover, Drebble is named a special hero of the Rebellion, in light of all the heroic acts Lando performed in his name. 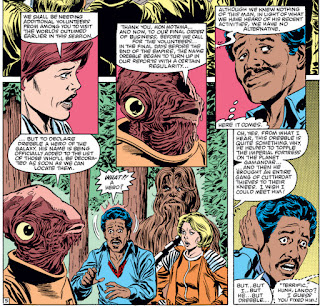 Mon Mothma lays out the new mission of the Alliance, stating that both Luke & Leia are off on diplomatic missions inviting planets to participate in the new galactic government (Leia apparently receiving her mission off panel). Also, the Rebels are still operating out of Endor instead of Arbra. 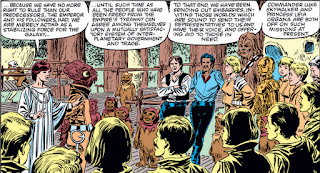 Lando has acquired a ship of his own, the Cobra. 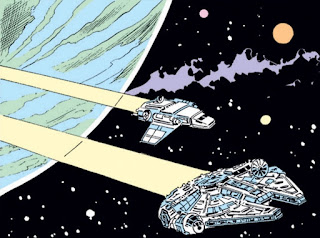 Wedge, Bossk and IG-88 all pop up in this issue, along with the remnants of the Lemo/Sanda gang from issue #79 and Drebble's Stenaxian gang from issues #71-72. 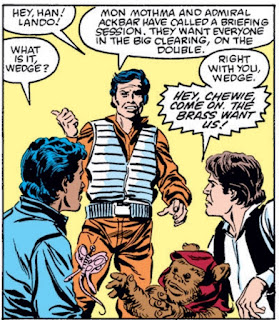 Um, Actually
Bossk is still being colored orange, not green.

Just Yesterday, In a Galaxy Surprisingly Close By
Lando's ship name is an awfully specific species of animal (as opposed to something more generic, like "Falcon").

Austin's Analysis
This issue pulls together the various Lando threads Duffy had stitched into the series prior to Return of the Jedi, bringing Drebble and the gang Lando conned in issue #79 together to attempt to get their vengeance on the conman (while also humorously paying off Lando's repeated use of the Drebble alias by having it backfire in "Drebble" being named a hero of the Rebellion, which, in turn, also ends up saving him). There some huge coincidences at work here (Drebble and the Lemo/Sanda gang just happen to be on the same world at the same time Han, Lando, and Chewie arrive there, and the trio is there only because of all subplot about Chewie being homesick at the world being close to his homeworld, which ultimately goes nowhere), but that sort of thing is less egregious in a more comedic story than a dramatic one, and this is definitely a story more played for laughs than anything (which is consistent with the tone Duffy tends to strike with her Lando stories). So while this isn't quite a resounding return to the dramatic stakes of reforming the post-Empire galactic order, it nevertheless is fun & entertaining to see Duffy playing around with her own plot threads again, and giving us, along the way, a rare (due to the circumstances of the arch-narrative) team-up between the series' two resident scoundrels, in which Han must deal with the ramifications of someone else's cons for a change.

Next Issue
A look at the second wave of Return of the Jedi action figures!