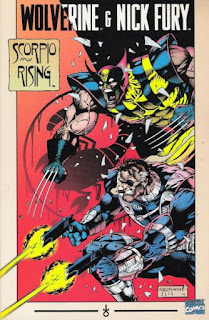 Plot
Recently freed from Soviet rule, the governing body of the nation of Carpasia is wiped out by Hydra, with the goal of replacing the government with a ruler loyal to Hydra, triggering a civil war within the country. When Michael Fury, training with his father, hears about the coup, he breaks the Cosmic Key out of SHIELD containment and dons his Scorpio garb, intent on fighting alongside his people. Meanwhile, Wolverine gets drawn into the Carpasian conflict on the side of the rebels, and he runs into Nick Fury, on the trail of his son. Together, they free Scorpio from Hydra, who attempted to lure him to their side using a Life Model Decoy of his deceased mother. The presence of the LMD makes Wolverine and Fury realize Hydra is augmenting their army with LMDs, and track the production facility to an abandoned nuclear power plant, which Scorpio destroys with the cosmic key, thereby crippling Hydra's efforts. In the wake of their defeat, Scorpio is named acting president of Carpasia. Wolverine & Nick Fury leave the country, with Wolverine telling Fury he has a lot to be proud of in his kid.

Firsts and Other Notables
The third Scorpio, Nick Fury's son Michael, returns in this issue. He'll make a few more appearances over the years, but never in an X-book (as of this writing). It's established (out of nowhere) that he's from Capasia (or at least considers them "his people"); presumably on his mother's side, since Nick Fury isn't. 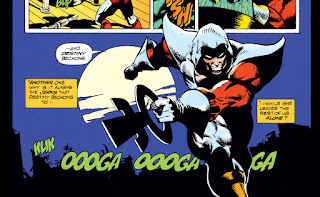 The first page of the issue is a text piece summarizing the events of The Scorpio Connection and laying out the Fury family history. 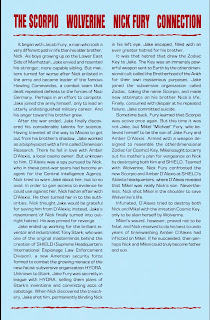 It blames Jake Fury for shooting Nick Fury in the eye, resulting in the need for his iconic eye patch. I have no idea if that is a retcon here, or referencing an earlier one, but I always thought Fury lost his eye during one of his Howling Commando WWII adventures.

The Chronology Corner
A footnote makes it clear this takes place before Wolverine #75. Specifically, it takes place after X-Men #24 & Uncanny X-Men #304, after Wolverine: Killing but before Global Jeopardy, and between issues #74 and #75 of Wolverine's solo series.

The Grim 'n' Gritty 90s
This issue is very pointedly set after the fall of the Iron Curtain.

Austin's Analysis
The original Scorpio Connection story was a pleasant surprise - a Wolverine one-shot that managed to dance around the problems found in most of those stories thanks to some effective art and a more adult (in a good way) story. Certainly, nothing about it called for a sequel (even if the fate of Fury's relationship with his son was left somewhat open-ended), but this is the 90s, and it demands Wolverine content, so here we are. And while this isn't necessarily awful, it's just as pointless as the original, with none of the artistic flourishes that helped elevate that story.

With Howard Chaykin sliding over from art to the script, he manages to retain some of the more noir-ish, "international" tone of the original story, but the move creates a void on art that Shawn McManus is not able to fill, matching the somewhat-more adult story with generic 90s art that is, at best, serviceable, and at worse, devoid of any charm or substance that adds anything at all to the story. As a result, the flaws become much apparent (and harder to forgive): Wolverine has very little reason to be involved in what is otherwise very much a Nick Fury story, Michael Fury's connection to this former Soviet country comes out of nowhere, the faux eroticism of Michael being seduced by women under the direction of an LMD styled after his mother, which might have worked under Chaykin's pencils, is instead some combination of laughable & head-scratching, and whatever political relevancy Chaykin might have been going for in setting the story in a post-Cold War Eastern European nation is lost when the whole political situation is resolved by Michael shooting a nuclear plant with his magic key and then being named President between pages. So while this isn't as much of an incomprehensible mess as, say, Wolverine: Evilution, that's mostly just because the barest sheen of the original story lingers on it.

Next Issue
Next week, the Rogue miniseries (for real this time)!