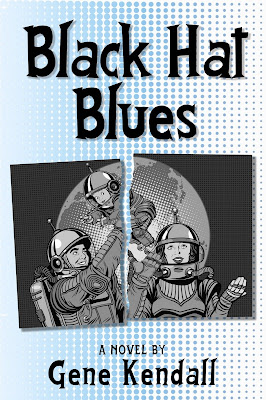 Fine. I’ll do a novel about comic books, instead.


Admittedly, I’m coming at them from the most sideways angle imaginable. Aspects of the prose are certainly inspired by comics, though. Some of the cast are “big talk” characters, so I’d say Chris Claremont is there as an influence. And there’s a trick Kurt Busiek pulled in a series he wrote for DC years ago that I appropriated (resolving a certain issue I was having perfectly, I think.)

I’ve never read Robert Mayer’s Superfolks, but I’m guessing my novel has some similarities, in terms of viewing the tropes as metaphor, looking at how they relate to true life.

Instead of setting a superhero story against the backdrop of a mid-life crisis, as Mayer did in 1977, Black Hat Blues stars a figure who’s closer to the end, reflecting on what he's created. The novel’s not a superhero narrative in prose form. It’s a story that sets the colorful world of costumed heroes, and the peculiarities of its fandom, against everyday, gray reality.

The inspiration for the novel came from…I have no real idea. I will say, in part, some of the ideas were prompted by the degeneration of a now-defunct comics site. What began as a fun place for some early aughts-style blogging and comics news at some point turned into endless scolding and outrage pieces. The seemingly infinite series on the horror of Spider-Woman’s curvy buttocks poking in the air on one cover, and the breathless praise for her radical redesign (“Spider-Woman’s Wearing a Jacket Now and We Can’t Even!”) just made me laugh.


But what if you’re the guy who drew that image, or produced any of the other innocuous pieces of entertainment that now inspire fiery condemnation online?* You’ve always thought of yourself as a good liberal. Always tried to convey the right messages, give to Amnesty International whenever you could. Now, you’re not only out of style, but your work is immoral in some way. You’ve become the bigoted villain you’ve always fought against. It’s got to mess with your head.

(*Yeah, I know the Spider-Woman cover artist is an Italian pr0n artist, and possibly didn’t know about any of this, but work with me here.)

I began writing the novel almost three years ago, finished a first draft that was far too long (about as long as the Holy Bible, according to my Kindle listing), and decided to put it away for a while. In the meantime, I finished a comedic paranormal novel, then my G. I. Joe trilogy. I returned to Black Hat Blues, hoping I could chop away the excess and get to the real story. We’re lean and mean now, coming in at around 200 pages.

The novel finds Mark Lipscomb, creator of the 1970s underground superhero parody Power & Gloria, reaching the end of his career. The characters have taken a life of their own over the years, moving out of head shops and into the mainstream. The 1980s even saw an animated adaptation, in conjunction with an intense merchandising phenomenon, based on the comic. Although its lasting legacy just might be landfills packed with the discarded plastic today.

With the fad dead, Power & Gloria limped along, until Ideas & Schemes Publishing put an offer on the table to purchase the property. Mark accepted the deal, assured he’d remain the one to dictate the fate of his creations. Although, arthritis has severely hindered his ability to draw. And his stories have a tendency to offend the modern taste makers, generating a routine series of social media outrages.

Did Mark read the fine print of the deal? Perhaps not. Being fired from Power & Gloria devastates the fragile soul. He does have one defender, though. His own creation, the villainous Mr. Scratch, who’s escaped a dangling plot thread from Mark’s final issue. The ingenious rogue has traveled the multiverse and found himself in Mark’s backyard. Truly, they were fated to become fast friends.

Except, Scratch isn’t as harmless in the real world as he is on the printed page. As the days pass, Mark can no longer deny what he’s created. And, as macular degeneration and arthritic wrists don’t lend themselves to old-fashioned slugfests, he must get creative if he wants to stop the bloodlust of his destructive id.

The book’s available for free if you’re a member of Kindle Unlimited. I do receive some royalties based on how far readers make it into the novel, so you can still support me even if you don’t pay for the direct download. Amazon’s algorithms apparently don't notice a book until it reaches 15 Amazon reviews, so I do need your help when it comes to feedback.

I hope you give it a shot. I don’t think it’s too “inside baseball,” but comics fans will likely pick up on some of the allusions to the actual industry. However you feel, please leave an Amazon review. All feedback is appreciated.