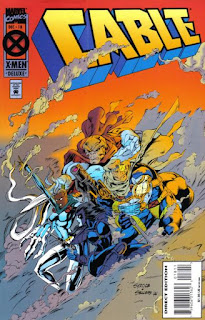 In a Nutshell
Cable, Domino, Storm & Caliban track the Dark Riders to Egypt.

Plot
Hunting for the Dark Riders, Cable, Domino, Storm & Caliban arrive in Alexandria, Egypt, where Caliban is able to locate Tusk. Captured, he agrees to lead them to his teammates, but when they're surrounded by a sandstorm Storm can't control, they realize it's a trap just as the Dark Riders attack. Cable and his companions once again hold their own, prompting Gauntlet to turn on Hurricane, who twice promised he could defeat Storm and twice failed, declaring that he's been tested and failed. But Harddrive teleports the Dark Riders away, followed shortly thereafter by Cable and his companions. They arrive in a ruined city which Cable recognizes as Akkaba, a place where, in the future, Cable's rebel group will establish a base, not realizing it is the birthplace of Apocalypse. Just then, the Dark Riders emerge from the city behind their leader, who removes his helmet to reveal that he is Cable's son, Tyler.

Firsts and Other Notables
This issue reveals that the leader of the new Dark Riders is Cable's son, Tyler, last seen in issue #8. Next issue will establish that he's taken the name Genesis and declared himself Apocalypse's heir. 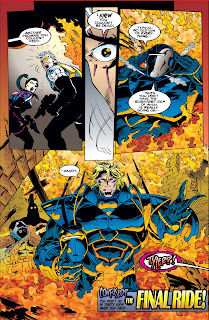 It's also established here that the Egyptian city of Akkaba is the birthplace of Apocalypse (and also the future home of a Clan Chosen base); much of the later Rise of Apocalypse miniseries will be set there. 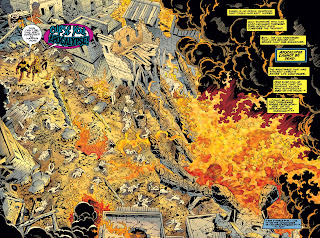 The Chronology Corner
Cable & Domino appear here between issues #39 and #40 of X-Force. Storm appears in this story after "Phalanx Covenant" but before Uncanny X-Men #318, and thus, before her trip to Egypt in X-Men Unlimited #7.

A Work in Progress
Caliban is back to talking like he did early in the Simonson X-Factor, heavy on the Third Person and nicknames (here he calls Domino “Patch Eye" (also, the dialogue suggests Domino doesn't know who Kitty Pryde is, which seems...odd, from a tactical perspective if nothing else). 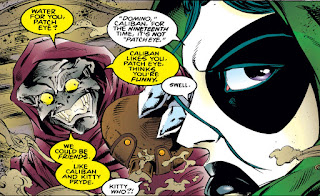 Former Dark Eiders Tusk & Barrage are shown to be working with the new group. 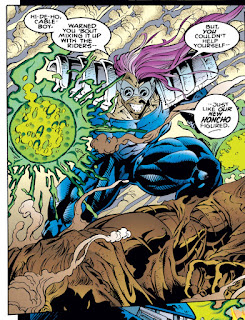 The Grim 'n' Gritty 90s
When Harddrive teleports the Riders away, Domino gets in a good joke about how shouting about it always helps... 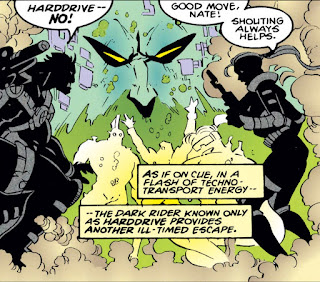 To the EXTREME!
When Cable threatens to kill Tusk, Storm notes that’s not how the X-Men do things, though Cable isn’t really doing anything Wolverine hasn’t done countless times.

The Cable Guy
Inspired by Cyclops, Cable fires off a series of telekinetic blasts to protect an innocent bystander from wreckage. 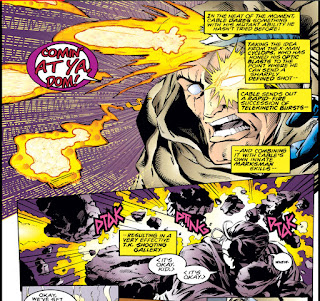 Cable thinks that he’s starting to consider his mutant abilities like a secret weapon. 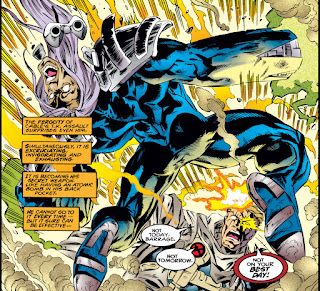 The loss of Cable’s ability to teleport is acknowledged.

Austin's Analysis
There’s a feeling of a deja vu to this issue, as it hits more or less the same beats as the previous one, with Cable, Domino, Storm & Caliban battling the new Dark Riders while Cable continues to expand the frequency and use of his powers. The big difference just transplants the setting of the fight, from the Morlock Tunnels to Egypt, at least until the cliffhanger reveals that Cable's son Tyler is the new leader of the Dark Riders. It's a long way over familiar terrain to get there, but the Tyler reveal is a good one, bringing back the closest thing this series has to a recurring villain and, through his usurpation of the Dark Riders, connecting him to the legacy of Apocalypse at a time when, in the wake of The Adventures of Cyclops and Phoenix, Cable's own connections to that character have never been stronger. Tyler has always been an awkward character - Cable has enough baggage before "evil grown son" gets tossed into the mix (and that's even before we get into the whole Tolliver mishigas) - but connecting him to the legacy of Apocalypse is probably the best possible lemonade to be made with him.

Next Issue
Next week: "Legion Quest" begins in Uncanny X-Men #320, X-Factor finds themselves in Madripoor in X-Factor #110, and Wolverine makes it to New York in Wolverine #89.