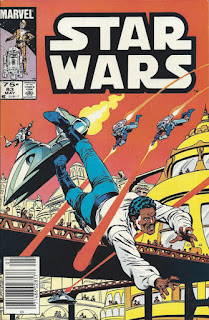 In a Nutshell
Lando helps a group of rebels overthrew an oppressive monarchy on the planet Drogheda.

Plot
On the planet Drogheda, Lando and the sister of Queen Sarna, Danu, are attacked by a group of rebels looking to depose the queen, but are rescued by Harlech, head of the Royal Guard. At the citadel, Lando reunites with Sarna, an old flame, and she tasks him with rooting out the rebels from their base inside a mine. Leading the Royal Guard, Lando leaves orders to capture, not kill, the rebels as he enters the mine to flush them out, but to his horror, the Royal Guard massacre the rebels as they emerge from the mine. Lando manages to capture one of them alive, and learns from him that in the wake of the Empire's collapse, the people of Drogheda simply want to establish their own government. Feeling played, Lando tells Sarna she can find some other sucker to help suppress the desired democracy of her people, but Sarna orders the Royal Guard to capture him. He manages to escape, running into Danu, who has been secretly helping the rebels. Realizing the time for their uprising is at hand, she signals her allies and they storm the citadel, with Lando fights alongside them, ultimately capturing Sarna. Sentencing her to exile, Danu offers to pay Lando to take her with him off-planet. Looking to salvage some profit from the adventure, he agrees, and both Lando & Sarna depart Drogheda, bickering with one another over a potential business venture.

Firsts and Other Notables
This is another fill-in/inventory issue. It is written by Linda Grant, a Marvel editor at the time with a few freelance writing credits to her resume (including a run on Marvel's Indiana Jones series, also licensed from LucasFilm, that begins a few months after this issue was published), making her the second woman (after Jo Duffy) to fully write an issue of this series, a distinction not shared by very many other titles (for example, up until late 2018, Uncanny X-Men had never had a woman write an entire issue, and even then, Kelly Thompson is co-writing along with two other (male) writers).

Bob McLeod, fresh off his run on New Mutants (at least based on when this was published) pencils, inks and letters the issue.

Though they won't all be fill-in issues like this, the series won't catch back up with Luke, Plif, Kiro and the Rik Duel gang until issue #87.

A Work in Progress
Lando says he was looking for an excuse to get off Arbra, but last we saw, the former Rebels were still operating out of Endor.

Yet we know this also takes places after Jedi, as the fall of the Empire is referenced. 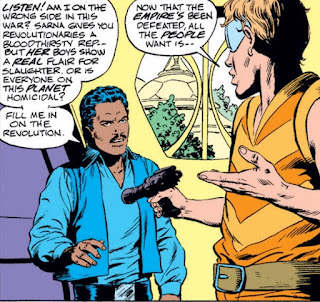 Just Yesterday, In a Galaxy Surprisingly Close By
Apparently, the concept of a Welcome Wagon exists in the Star Wars galaxy. 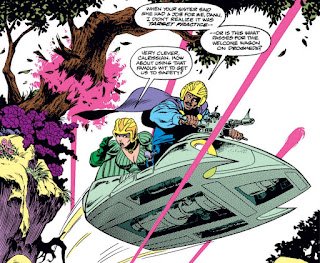 Austin's Analysis
This series has a fairly successful history with fill-in issues (Jo Duffy herself wrote a few becoming the series' regular writer), and this one certainly fits the mold of the previous ones, melding some fairly generic sci-fi elements with one or more Star Wars characters. Here, Lando gets the spotlight, with the added detail that the villain is a former flame fitting his role as the more debonair of the series' heroic scoundrels. That said, it's a shame the book had to fall back on a fill-in at this point, just two issues into its post-Return of the Jedi narrative (and with only one of those issues even partially about exploring the ramifications of the Rebellion's ultimate victory in the film). So just as that story is starting to build, complete with the return of a handful of the series' recurring non-film characters, it's pushed aside in favor of this. Which is perfectly fine for what is is, but nevertheless robs the series of the narrative momentum it was just starting to build.

Next Issue
Han gets into the diplomat business!