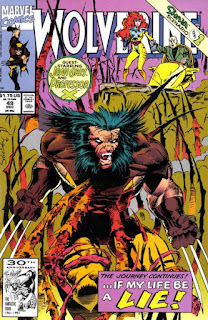 In a Nutshell
Wolverine continues to explore his memories, risking his own sanity in the process.

Plot
With the help of Professor X & Jean Grey, Wolverine continues to explore his long-hidden memories, including a mission in Cuba with Sabretooth, shortly after President Kennedy was assassinated. Suddenly, Jean and Xavier appear in his mind, telling him that each door he encounters represents blocks on his memories, and that not everything he experiences may be genuine. They caution him that his mind has been tampered with by experts, who have left traps throughout. Open too many doors they don't want opened, and he could end up becoming an animal. Undeterred, Wolverine continues, opening another door to revisit his and Sabretooth's attack on the gunrunners led by Silver Fox. Her interactions with him lead him to believe that their past together is another false memory. Suddenly, Jean and the professor bring him back to consciousness. Xavier is worried his exploration has brought out his more anti-social side, prompting Wolverine to insist he's a man, not an animal, and leave for some fresh air. But unknownst to him, he's being watched by Carol Hines. She reports to Professor Thornton, worried that Wolverine is close to discovering the truth, but the Professor insists that Wolverine's memories will only lead him to Shiva, and Shiva's only purpose is to kill him.

Firsts and Other Notables
Professor X and Jean Grey guest star in this issue, somewhat amazingly making their first appearances in this series. Xavier cautions Wolverine that his exploration of his memories runs the risk of bringing out his more animalistic side. This is meant to establish a new status quo for the character, bringing some of the edginess and unpredictability back to the character, but for the most part, this change is ignored outside this series, and even here, Hama quietly drops it eventually.

Wolverine's denial of becoming more animalistic is punctuated by him ripping off his brown-and-orange costume. With Jim Lee returning him to his (more) original yellow-and-blue costume next month in X-Men #4, this marks the last time we'll see him in the brown-and-orange, which he's worn (pending his appearances as Patch and his brief adoption of the yellow-and-blue X-uniform post-"X-Tinction Agenda") since Uncanny #139. To Hama's credit, he seems to be giving Wolverine some motivation for the change, tied to John Byrne's reasons for changing his costume in the first place (Byrne considered the brown-and-orange look more appropriate for an animalistic character like Wolverine). Lee simply liked the original better, but here, Hama ties Wolverine's costume change to the real world reasoning behind the previous change: Byrne wanted Wolverine to have a more animalistic costume; now Hama has Wolverine switching looks BECAUSE Byrne's costume represents his more animalistic side. 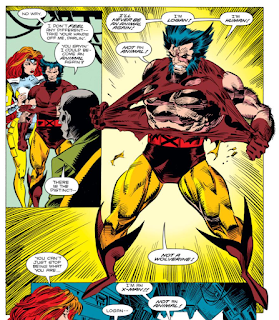 At the end of the issue, Professor Thornton and Carol Hines, from "Weapon X" turn up, having been secretly monitoring Wolverine. 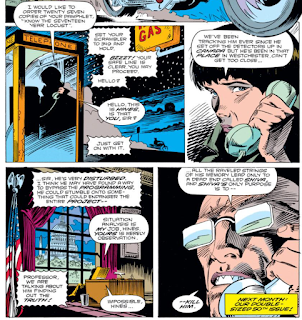 This issue teases the idea that Wolverine isn't really Canadian, with Sabretooth (in one of his memories) laughing at the idea and confirming both he and Wolverine are Americans, but this is a development that is mostly ignored at this story.

A Work in Progress
Wolverine recalls a memory of being in Cuba with Sabretooth shortly after JFK is assassinated (presumably working for the CIA), though it's unclear whether this is a real or false memory. 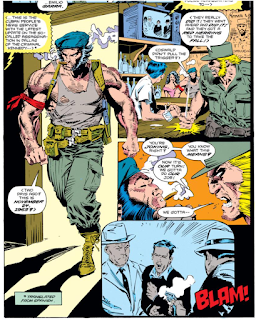 Professor Xavier warns Wolverine that blocks have been placed in his memories, with false memories inserted along with traps should he get too close to remembering something he shouldn't. 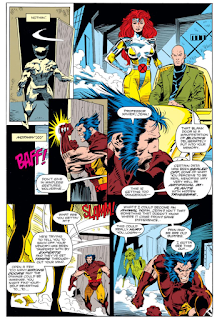 The story Wolverine told in issue #47, of having once had a dog that went rabid and had to be put down by Silver Fox, is referenced here. 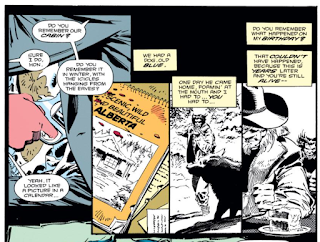 The cabin Wolverine and Silver Fox shared, as seen in issue #10, is also referenced, and its implied that entire scene was a memory implant as well.

Austin's Analysis
Like the previous issue, this is a perfectly fine exploration of Wolverine's mysterious past. Which makes sense, since this basically is the exact same issue as the previous one, with Professor X and Jean Grey subbed in for Jubilee as the outsiders watching Wolverine have flashbacks, and the setting changed from the abandoned Weapon X facility to the X-Mansion. Otherwise, it's more of the same: more flashbacks that may or may not be memory implants, more callbacks to "Weapon X", more of the secret agent/gun runner confrontation featuring Silver Fox, more of Wolverine howling in rage amidst the spiky "painscape". The big developments, Wolverine abandoning his brown-and-orange costume as he fights to hold on to his humanity and the reintroduction of "Weapon X"'s Professor Thorton and Hines, are held for the end, and they represent the only real narrative momentum carrying the story through to its conclusion next issue.

Next Issue
Next week: the X-Men fall into a hole in Uncanny X-Men #284, the new Brotherhood of Evil Mutants continues to grow in X-Force #6, and Strong Guy punches the Washington Monument in X-Factor #74.