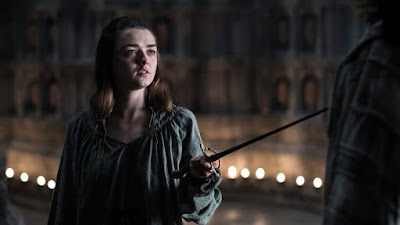 On the Road
The Hound is pissed! He goes off in search of some Brotherhood Without Banners members responsible for the slaughter of his community and, as luck would have it, he finds some of them hanging around a campfire practicing kissing. Literally!

The Hound walks up and axes them all to death fairly unceremoniously. Well, the final dude is kept alive long enough for the Hound to try and get information as to the whereabouts of the others responsible for the slaughter but the dude doesn't give up the goods. That just means he gets a good axing too.

The Hound then comes across Beric and Thoros of the Brotherhood Without Banners and they have the rest of the guys responsible for the slaughter in nooses. Beric wants to hang them because they're giving the Brotherhood a bad name and, also, they're shitty people. The Hound wants to kill them himself. There's some negotiation and, in the end, the Hounds got to kill two of them personally but it has to be by hanging and not by axing. The Hound likes axing but goes along with the hanging.

Later, Beric wants the Hound to join them. The Hound says he's not very religious but the promise of fighting ice zombies is enough for him to tag along. Besides, what else is he going to do?

River Run
Brienne and Podrick the Female Fantasy Fulfiller arrive and find Jaime. Brienne talks with Jaime and asks for permission to go to River Run castle to ask Blackfish and his army to leave with her. Since Jaime wants to bone Brienne, he gives her permission.

Meanwhile, Bronn sneaks up on Podrick the Penile Pulverizer and compliments him on his giant cock. You see! You doubted me! You thought it was stupid that I kept bringing up Podrick's giant penis but they've referenced it again! You would've been lost without me. Anyway, Bronn teaches Podrick how to fight dirty.

Brienne talks with the Blackfish but fails to convince him to leave River Run and fight Ramsay. Blackfish is more concerned with his home and not so much the Stark's.

Jaime meets with Edmure and successfully does the good cop, bad cop routine which is pretty impressive considering he is a singular individual. First Jaime tries to be nice but Edmure is antagonistic. Edmure wants to know how Jaime can even live with himself after everything he has done.

So, Edmure comes to the front gate of River Run and demands entrance. Blackfish plays the part of Admiral Ackbar and declares this a trap but the guards are like "order are orders...you can see the bind we're in!" Since the guards are incapable of independent thought they let Edmure in who promptly orders the guards to put down their weapons and open the gates to let the Lannister army in. Sigh...

Edmure also demands the Blackfish be arrested but he's already flown the coup with Brienne and Podrick the Tri-Legged.. They run through an underground tunnel to a getaway boat but Blackfish won't board. He wants to stay and fight to the death because home and honor and other bullshit. So Brienne and Podrick are off while the Blackfish fights to his death. Fortunately, it appears the getaway boat is able to stay afloat despite the immense weight of Podrick's massive member.

Later, King Tommen is about to make an announcement but Cersei wasn't made aware of any "announcement." Teenagers...

Cersei goes to the throne room to hear this announcement. King Tommen decrees that trial by combat has been abolished. I assume this was just done because the High Sparrow was afraid of Franken-Mountain but, honestly, trial by combat is a real stupid way to settle legal matters.
Cersei is obviously not happy to hear the news but Qyburn tells Cersei that a certain rumor they've heard is more than just a rumor. Mystery! Intrigue!

Meereen
Speaking of mystery, Varys leaves Meereen on a mysterious journey that both characters are careful not mention specifics on despite the fact they both know what this journey is about.

After that and a joke-off between Tyrion, Missandei and Grey Worm the Slave Masters attack Meereen. I...honestly don't know why. It's implied that the 7-year extension on slavery may have had something to do with it but I'm not sure why. The important thing is Daenerys shows up and she seems ready to kick some ass!

Braavos
Arya is in bad shape, what with all that abdomen bleeding and such. She makes her way to Lady Crane who stitches up Arya. Apparently, Lady Crane liked to date bad boys and, as a result, had learned how to suture people. Also, she mutilated that other actress's face...even though I'm still not positive it was her who wanted her dead.

Arya and Lady Crane have a heart-to-heart. Lady Crane wants Arya to join the acting troupe. Arya wants to travel the world, like Kane from Kung Fu. In the end, it's all moot because Lady Crane ends up dead thanks to assassin Waif.

Arya jumps out the window and runs the streets pretty spryly for someone who had just been stitched up in the stomach a day ago. Even as Arya is sprinting through the streets the sutures don't break. Well, they do eventually, but only when convenient for the plot.

Assassin Waif Terminator walks her way through the crowd trying to catch Arya. I'd suggest running but, then again, I'm not a killer cyborg from the future. What do I know?

This chase culminates at Arya's hideout. Arya takes out Needle as Assassin Waif walks in. Arya cuts out the lights, literally, and...we end up at the House of Black and White. Jaqen follows a trail of blood to find the Waif's face on the wall of faces. Arya sneaks up behind Jaqen but Jaqen is actually pleased. Arya is finally no one. But Arya declares that she is someone. She's Arya Stark and she is going home. Like we didn't all know that already.

Other Thoughts
Holy crap is the Waif a crappy assassin. Try legitimate running!

When you're bleeding out, is a closet the best place to hide? Should you "hide" at all? What if Lady Crane didn't bother to open her closet for a few days?

I legitimately have no idea where Varys is heading. Dorne?

So were Franken-Mountain's head ripping antics the impetus for the High Sparrow and Tommen to get rid of trial by combat or was that in the works all along? I hope it was because of Franken-Mountain's antics because that would be another example of Cersei's short-sightedness biting her in the butt.

So, it doesn't look a like a battle of the Cleganes is imminent. Not only is trial by combat abolished but the Hound is apart of the Brotherhood Without Banners and isn't loyal to the Sparrows anyway.

Not really a big fan of the Blackfish dying for his home and honor. That doesn't serve anyone. Leave with Brienne and Podrick. Help Jon Snow!

Seriously, Blackfish should've killed Jaime when he had the chance..

That's alright, Game of Thrones, I don't need to see a cool sword fight. Just cut the lights and proceed to the next scene.

I'll be honest, I had no idea if that was supposed to be the Waif's face or Arya's face until Arya showed up in the flesh.

The Hound: These are your last words? "Fuck you?" Come on, you can do better.
Brotherhood Without Banners Dude: Cunt!
The Hound: You're shit at dying, you know that?

Season 5 Totals
Boob Count: 19 (No nudity this episode.)
Full Frontal Count: 4
Butt Count: 5
Coitus Count: 0 (Yara was close, but it was off screen.)
Main Character Death Count: 11 (The Waif finally gets got. I like Blackfish, but I'm not sure he really counts as a main character.)
Hodor Count: 30
Newer Post Older Post Home
Posted by Dr. Bitz at 6:33 PM