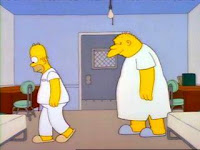 The birthday song Bart and "Michael" write for Lisa was written by Jackson (in addition to helping produce "Do the Bartman" for the "Simpsons Sing the Blues" album).

The show's creators were unable to legally confirm that the real Michael Jackson lent his voice to the episode until long after the episode originally aired. Because of the hassle involved in keeping that under wraps, a new policy was instituted in which any celebrity that wished to appear on the show would have to be credited under their own name.

A rerun of this episode on January 30th, 1992 featured a new opening sequence in which the Simpsons respond to a statement made by then-President Bush the Elder in a campaign speech, in which he said "we are going to keep on trying to strengthen the American family, to make American families a lot more like the Waltons and a lot less like the Simpsons."

In the new opening, the Simpsons family is gathered around the TV watching Bush's speech, to which Bart then responds, ""Hey, we're just like the Waltons. We're praying for an end to the Depression, too." The alternate opening is included on the season four DVD set.

Favorite Quotes:
Lisa: Bart, my birthday's in two days. I'm going to be eight years old. It's a big number, almost double digits.
Bart: Well, enjoy it while you can. Everything changes when you hit the big one-oh. Your legs start to go, candy doesn't taste as good any more...
Lisa: Bart, will you please let me pour my little heart out?
Bart: Sorry, this old-timer does ramble on sometimes, don't he? 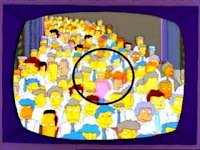 Doctor: Mrs. Simpson, I'm sorry, but your husband suffers from a persecution complex, extreme paranoia, and bladder hostility.
Marge: Doctor, if you just talk to him for five minutes without mentioning our son Bart, you'd see how sane he is.
Doctor: You mean there really is a Bart?! Good Lord!

This episode also has the two classic lines from Bart when answering the phone: "Joe's Crematorium. You kill 'em, we grill 'em" and "Joe's Taxidermy. You snuff 'em, we stuff 'em."

Teebore's Take: The third season of "The Simpsons" is generally considered the start of show's Golden Age, the beginning of the run of its best, most humorous episodes, the ones we think of when we think of "classic" Simpsons (as a result, expect a lot of "Five Jebediah Head" reviews from here on out, for awhile). At this point, "The Simpsons" had established itself as a cultural phenomenon, and now it really takes off, making clear it's more than a "kiddie show" (as a result, Homer will quickly rival, then surpass, Bart as the show's standout, go-to character), and deftly weaving the numerous pop culture references, both broad and esoteric, for which the show is known almost seamlessly amongst the stories and jokes.

The first episode of the season is true to this new form, working a guest appearance by one of pop culture's biggest celebrities into a story about Homer getting committed (and referencing "One Flew Over the Cuckoo's Nest" and "Rain Man" as well). The Homer/Michael A-story handles the comedy while the B-story brings the heart, as Lisa struggles with once again being overlooked on her birthday and Bart's attempts at making amends. "Stark Raving Dad" is a fine template for how "The Simpsons" will integrate humor, heart and pop culture in the years ahead. 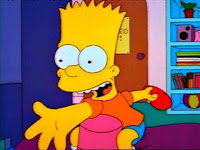