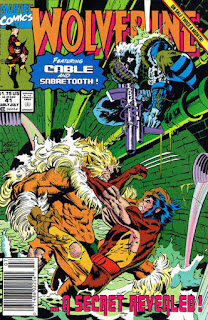 In a Nutshell
Wolverine and Sabretooth battle in the tunnels under New York City.

Plot
Forge and Jubilee search the river for Wolverine, but find no signs of him. However, Elsie-Dee has managed to drag the badly-injured Wolverine into the sewer tunnels, which are quickly flooding due to the storm raging overhead. Leaving him to find help, Elsie-Dee stumbles over Sabretooth, inadvertently waking him up, as Forge calls in a favor to help locate Wolverine. Meanwhile, Masque leads the Morlocks in staving off the flood waters, just as Sabretooth attacks Wolverine, declaring that he is Wolverine's father. The sounds of their battle reach Elsie-Dee, who runs into Cable in the tunnels and asks for his help. Just then, Sabretooth and Wolverine are swept away by flood waters redirected by the Morlocks, while on the river bottom, Albert awakens.

Firsts and Other Notables
Sabretooth makes his first present day, on-panel appearance in this series this issue, waking up in the flooding Morlock tunnels and attacking Wolverine, declaring that he is Wolverine's father (and then proceeding to drop references to that fact into his dialogue every changce he gets). Of course, Claremont has long teased the idea that Sabretooth is Wolverine's father, but next issue will ultimately rollback this idea and establish that Sabretooth is wrong (why he decided to share this information with Wolverine NOW, aside from the fact that Hama apparently wanted to directly address it once and for all, isn't terribly clear). 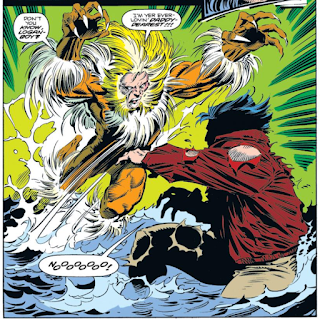 Cable, becoming something of a ubiquitous guest star around this time as his popularity grows, appears in this issue (and the next two) as well. 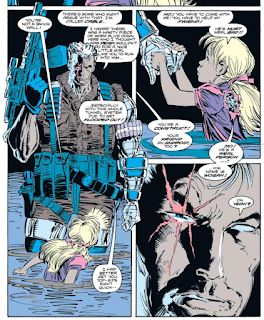 Masque, taking a break from antagonizing the New Mutants/X-Force, also pops up in this issue, though he doesn't directly interact with Wolverine or do anything all that nefarious; he's seen simply trying to stem the flood waters raging through the Morlock tunnels. 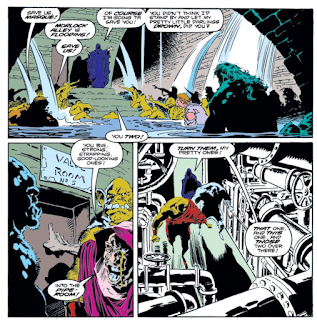 Wolverine returns to bi-weekly shipping with this issue for the summer, one of four Marvel titles to do so in the summer of '91, and the only X-book to do so (the other bi-weekly series are Avengers, Captain America, and Silver Surfer). Unlike previous years, the move to bi-weekly shipping does not coincide with a formally-constructed, multi-part serial story; instead, it's just business as usual for the series.

This issue contains two pin-ups, one by Mike Mignola and another by Art Thibert, and received a second printing with the logo colored gold.

The Chronology Corner
Cable appears in this issue and the next two following "Kings of Pain" and before X-Force #1.

A Work in Progress
Sabretooth's murder of Wolverine's one-time girlfriend Silver Fox, as established in issue #10, is referenced again. 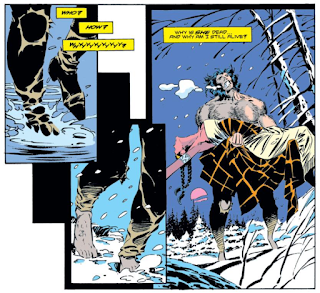 Sabretooth's back being broken by Caliban in New Mutants #91 is referenced, a nice bit of cross-book continuity. 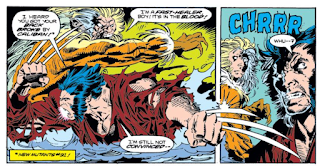 The Best There is at What He Does
Wolverine notes that when his healing factor goes into overdrive, it cuts off his conscious mind.

Teebore's Take
If you were to pick any one issue as the pivot point of Wolverine's series, the issue where the series officially ended its existence as a narrative island cutoff from the trappings of the series from which it spun off, this would probably be that issues. After widening the world of the series last issue by showing Wolverine at the X-Mansion for the first time in the pages of his solo book and bringing both fellow X-Men Jubilee and Forge into the narrative (all of which followed an guest appearance by Storm in the previous three issues), this issue doubles down on that, dropping Wolverine into the Morlock Tunnels alongside Masque, introducing Cable to the narrative as a guest-star, and bringing Wolverine face-to-face with his archenemy for the first time in the series' history (they two interacted in the present in issue #10, but never directly). In retrospect, it probably seems a bit odd that a solo character went this long without encountering his unquestionable archenemy in his series, but even in 1991, the idea of Wolverine and Sabretooth as the Batman/Joker or Superman/Lex Luthor of the X-Men universe was still a relatively new idea, as the characters had really only fought one another a handful of times (along with a pair of flashback encounters in issue #10 and a Classic X-Men backup).

Of course, this issue is also notable for making the subtext of the Wolverine/Sabretooth relationship text and tackling the question of their whether or not the pair is blood related, one of those things that fans speculated about even in '91, with Claremont having dropped plenty of hints towards his intentions along the way. I'll hold my thoughts on that subject until next issue, when the question is, seemingly, put to rest. For now, it's simply a treat to see this series engaging with the wider world of its main character, and to be tackling long lingering questions about the character's past head-on.

Next Issue
Tomorrow, more fun with Sabretooth and Cable in Wolverine #42. Next week, Uncanny X-Men #279 and X-Force #1.