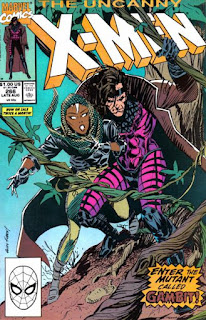 In a Nutshell
The first appearance of Gambit.

Plot
Storm fights off the Shadow King's Hounds, using her limited powers and their numbers against them, and manages to dive out a window into the pool, just as someone else approaches. Meanwhile, Nanny, alerted to Storm's whereabouts by her user of her power, sets out to rescue her from the Shadow King. Back at the mansion, Storm watches as the mysterious stranger who pulled her from the pool and into the vault attempts to steal the paintings there. Just then a Hound rushes into the room, and the stranger attacks it by hurling a metal spike charged with explosive energy before introducing himself as Gambit. Together, he and Storm attempt to flee, but find their way blocked by Dr. Shen and more Hounds. 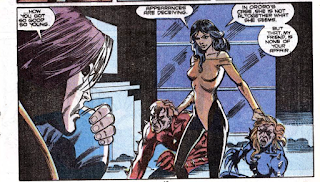 Together, Storm and Gambit manage to evade the Hounds and the Shadow King as they race for the roof. Once there, Storm releases the parachute in her backpack, and generates a wind to carry them back to the junkyard where she's staying. Storm tells Gambit that the Shadow King won't stop coming after her, and now that Gambit's helped her, the Shadow King will come after him as well. In Washington DC, Val Cooper enters Freedom Force's townhouse, intending to kill Mystique on the Shadow King's orders, and finds Mystique waiting for her. She tells Val that Destiny predicted this, and that Mystique will meet her fate as Destiny did. With that, a shot rings out in the night.

Firsts and Other Notables
Despite his appearance in X-Men Annual #14, which was on sale prior to this issue, this is considered the first appearance of Gambit, Claremont's last significant X-Men character. Following this issue, Gambit will quickly become a fan-favorite and fixture of the team, pretty much to this day, eventually getting into a long-simmering relationship with Rogue and headlining two limited series, a surprisingly-good and surprisingly-long running regular series in the late-90s, and a solo feature film (with Channing Tatum currently slated to star).

Gambit's power will eventually be defined as the ability to charge objects with kinetic energy, causing them to explode, though that isn't made entirely explicit in this issue (he does charge things with some kind of energy, after which they explode). Eventually, his object of choice will become playing cards, though in this issue he simply uses generic throwing spikes (and the energy seems to come from his eyes). He also displays in this issue a possible superhuman ability to influence the minds of others, an ability that gets teased a bit in his early appearances but which is ultimately dropped (and chalked up to a high but not superhuman level of charisma). 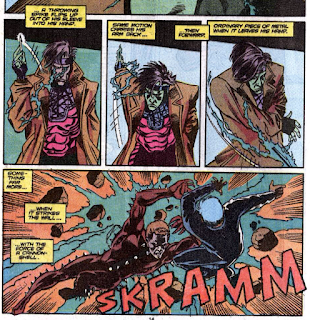 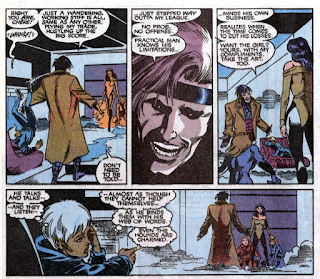 Already a thief in this issue, that particular character trait will lead to the creation of an entire group of characters, the Thieves Guild and the Assassins Guild, and a complex mythology therein that will serve as the backdrop for a number of Gambit-centric stories and a few additions to the X-Men rogues gallery.

Given that he's the character created closest to Claremont's departure from the X-books, much has been theorized about the writer's ultimately-aborted plans for the character. The one I've heard most often is that Gambit was intended to be the flip side of Claremont's planned (and unused) origin for Mr. Sinister: if Mr. Sinister is the manifestation of young Nate's dark side, then Gambit is the manifestation of Nate's good side, a hero who is as simplistically cool as Mr. Sinister is simplistically evil. Another popular theory was that Gambit was meant to be revealed as the post-Siege Perilous manifestation of Longshot, given their shared affinity for throwing spikes and charismatic abilities (this theory, of course, ignores the fact that Longshot never went through the Siege Perilous). Claremont has simply said he intended for Gambit to be revealed as a villain, in league with Mr. Sinister, working to destroy the team from within. Of course, Gambit does eventually end up having connections to Mr. Sinister in his past, though in ways totally different than Claremont intended.

Gambit explains that he's helping Storm because thieves stick together, a hint at his future backstory and the foundation of the Storm/Gambit pairing, which drives a lot of Gambit's early characterization (before being mostly dropped after the '91 relaunch splits the two into separate books and they don't as much page time together).

The issue ends with a Shadow King-controlled Val Cooper seemingly shooting Mystique, though only the sound of the shot is shown - who was shot is not revealed. Eventually, we'll find out that Val was able to resist the Shadow King's control enough to shoot herself (not fatally) instead of Mystique, with Mystique then taking Val's place. Thus, all appearances of Val Cooper from now until X-Factor #69 reveals the switcheroo, are actually Mystique. 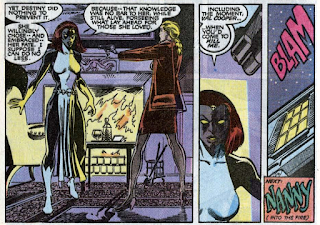 Not surprisingly, this issue has commanded a large price on the back issue markets almost since the moment it became a back issue, and remains one of the pricier modern X-Men comics. It was definitely the last post-Byrne issue I acquired for my collection, and I'd already acquired quite a few of the Claremont/Byrne (and even some of the 60s stuff) issues before I did.

Though he does not draw this issue, Jim Lee is credited as Gambit's co-creator (along with Claremont), having helped design the character prior to the start of his run on the series (I believe it is a Jim Lee drawing of Gambit which appears in the corner cover box of this issue; the look of that figure is noticeably different from the main one on the cover).

As with the previous issue, Andy Kubert draws the cover.

A Work in Progress
A narrative caption on the opening splash says this issue stars Storm, who has been mysteriously turned into a child. Except the previous issue explained how that happened, thus making her current status less mysterious.

The Shadow King's Hounds have gained spikes on their bodysuits, a la Rachel Summers, between issues.

Shadow King describes what he's done to Dr. Shen and the Hounds as summoning forth the shadows in their souls, an explanation for his moniker on this world (as he's yet to be connected to the Hellfire Club, as in the world Excalibur visited).

Shadow King is unable to lock onto Storm's mind, possibly an effect of Roma's spell that makes the X-Men invisible to detection. 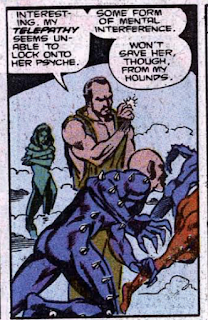 Nanny knows the Shadow King, and fears him. 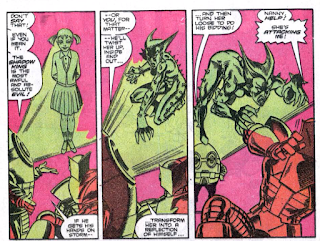 The Best There Is, Mon Ami
It's his first appearance, and Gambit is already dropping a "chere" (three, in fact, in the course of the issue). 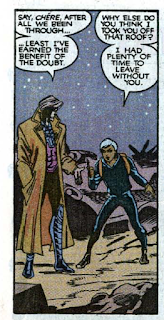 Gambit notes its a good thing Storm is young or he might get ideas. Stay classy, Gambit! 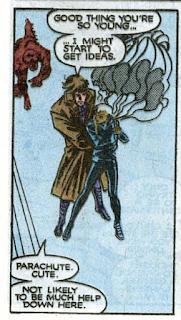 It's in the Mail
A response to a letter in this issue declares that Scalphunter of the Marauders isn't a mutant, only a good inventor, which is contradicted by later stories which establish that he is, in fact, a mutant (with the power to basically build guns). Also, Gambit eventually ends up having a history with Scalphunter, which makes this particular letter's placement in this issue rather amusing.

Teebore's Take
And so we come to Gambit.

And therein lies part of the problem with Gambit: he's admittedly a cool character (I mean, throwing explosive playing cards is just so comic book cool it hurts), and especially in these early goings, before the character gets bogged down in a seemingly-neverending relationship with Rogue and saddled with all the Thieves Guild nonsense, it's hard not be intrigued by him, but he's also a self-consciously cool character, a character where all the things that make him enticing to readers seem very calculated, and as a result, his whole schtick feels very, very forced. He's clearly meant to be the new (or at least the next) Wolverine, but Wolverine became mysteriously cool organically, his mystique growing over time. He wasn't created with a mysterious past; we just didn't know his past. The hints and teases and kewl details that were added to the character (His claws are part of him! He can heal superfast! He knows Japanese!) over time developed hand-in-hand with the character's growing popularity.

Whereas Gambit, like The Simpsons' Poochie ("You've heard the expression "let's get busy"? Well, this is a dog who gets "biz-zay!" Consistently and thoroughly!"), was seemingly designed, from the ground up, to be the cool new character on the block (to the point where he's very quickly put into a "young stud surpassing the old has-been" relationship with Wolverine). With Wolverine, readers were shown, over time, just how cool he was. With Gambit, we're instead told, almost immediately, "hey, this is a cool character! Love him!" As a teenager, it's admittedly tough to ignore all the kewl trappings (the playing cards, the trenchcoat, the bo staff, the charm, the dubious morality), and easy to not realize just how much you're being played; as an adult, it's tough to ignore just how obviously-manufactured Gambit and his shady cool guy persona were, before shaking your head for falling for it so hard.

Putting aide all that for now, even in this issue it's clear that Claremont intends big things for the character. He gets prominently placed on the cover, and this is no "sneak a new character into an ongoing story" kind of thing: this entire issue is all about Gambit. It resolves last issue's cliffhanger, and moves the story to its conclusion next issue thanks to a brief interlude involving Nanny and Orphan Maker, but otherwise, this is all about introducing Gambit to Storm, and to the readers. As such, it's a slight improvement over the previous issue: while the art is still unexciting, Gambit does immediately make things more interesting, giving us something more than Kid Storm fighting off oddly-writhing S&M thralls of the Shadow King. This issue is remembered far more for its historical significance than for anything in the story itself, but that still gives it a leg up over the previous one.