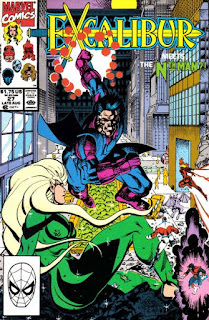 In a Nutshell
Excalibur is manipulated by Jamie Braddock into fighting the Nth Man & Alfie O'Meagan.

Plot
The insane Jamie Braddock meets with Nigel Frobisher in anticipation of Nigel's upcoming meeting with the crime chiefs of South Engalnd, but when Nigel gets angry with Jamie's caretaker, he transforms him into a twisted image of Vixen to make his job harder. Just then, Jamie gets distracted by something on TV. Meanwhile, Excalibur is called to Pinewood Studios by WHO to investigate Dr. Candy Goodstroke, who appears to be a refugee from an alternate reality and believes Excalibur to be manifestations of a powerful being named Alfie. As Meggan and Captain Britain follow Dr. Goodstroke's trail to where she first appeared, Nightcrawler tries to cheer up Phoenix, who is depressed over Shadowcat's absence. But he instead triggers a panic attack, leading her to teleport herself & Nightcrawler to Dr. Goodstroke's world, replacing them with John Doe the Nth Man & KGB assassin Vavara Novikova. 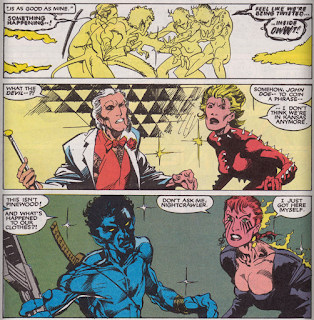 Joe and Vavara end up fighting Captain Britain and Meggan, while Nightcrawler and Phoenix tackle the supremely powerful Alfie, who is dressed like Galactus, in front of a massive TV through which Nightcrawler can see Jamie Braddock watching them. As Phoenix unleashes her full power on Alfie, Jamie tries to kill Nightcrawler to give her more motivation and make the fight more entertaining to watch. But Nightcrawler is able to hit cancel on the large TV remote control, causing everything to revert to normal, prompting Jamie to realize that he's better off creating his own realities than playing with existing ones.

Firsts and Other Notables
This issue guest stars the Nth Man, the star of short-lived sixteen issue series of the same name created by GI Joe (and upcoming Wolverine) writer Larry Hama & artist Ron Wagner, set in its own universe independent of the Marvel Universe (the world of Nth Man, like ours, views the events of the Marvel Universe as fictional tales) where World War III broke out after Alfie O'Meagan (who also appears in this issue) used his tremendous reality-altering powers to destroy the world's nuclear arsenal, upsetting the balance of power.  I gather the Nth Man, aka John Doe, is basically a super-awesome ninja.

I don't know for sure if Claremont was a fan of the series, but presumably he was, as the series' final issue was on sale at the same time as this one, so it's doubtful the appearance was the result of any kind of editorial mandate. I've never read it, but reading the synopsis on Wikipedia makes me intrigued. I might have to see if I can find it hiding in some quarter bins somewhere (as I doubt Marvel will ever reprint it).

Jamie Braddock, Vixen and Nigel Frobisher, last seen in issue #21 when Jamie turned Vixen into a fox and Nigel into Vixen, appear briefly in this issue. I believe this is the final appearance of fox-Vixen, though the other two, of course, will appear again.

A Work in Progress
While dancing with Nightcrawler, Rachel hallucinates that he's actually Spiral, recalling Spiral's seduction of Rachel in Uncanny X-Men #209. 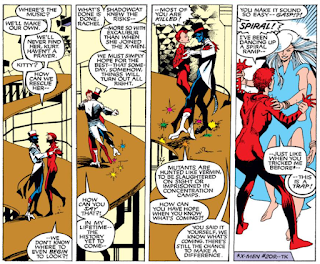 Vavara's, wearing Rachel's costume, complains about all the spikes, and notes that there's no zipper to remove it (since Rachel just manipulates it via telekinesis). 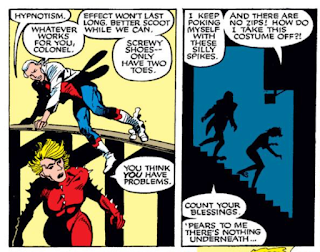 Teebore's Take
Though not as polished or energetic as Alan Davis' work, the art in this issue, from Barry Windsor-Smith and Bill Sienkiewicz, is easily the highlight of it. Though the two creators' styles at this time aren't terribly complementary - Sienkiewicz's scratchy inks take something away from Windsor-Smith's smooth, lanky forms, while Windsor-Smith's more traditional pencils reign in Sienkiwiczs wild style - they nonetheless combine for a grittier, more realistic look (presumably fitting the aesthetic of Nth Man) that we've never really seen before in this series, and it's certainly the strongest non-Davis art to be featured in awhile.

The same can't be said for the story, unfortunately. Claremont presumably had some fondness for the Nth Man, which is fine, and there's some little bits here, like the return of Jamie & Nigel and the team dealing with the loss of Shadowcat, that make the story as a whole feel less like a one-off fill-in and more a part of the ongoing narrative. But for the most part, this reads too much like yet another chapter of the "Cross-Time Caper", with Excalibur dealing with beings from another reality and Phoenix battling some all-powerful force, a similarity Claremont himself notes in the issue itself, when Excalibur is first called in by WHO and they all groan when the alternate reality explanation for Dr. Goodstroke's presence is put forth. It's essentially too much the same, much too soon, even if the art is a step up from the usual non-Davis material.

Next Issue
Tomorrow, the "Lazarus Project" concludes in Wolverine #30. Next week, Excalibur #28 and Wolverine #31.