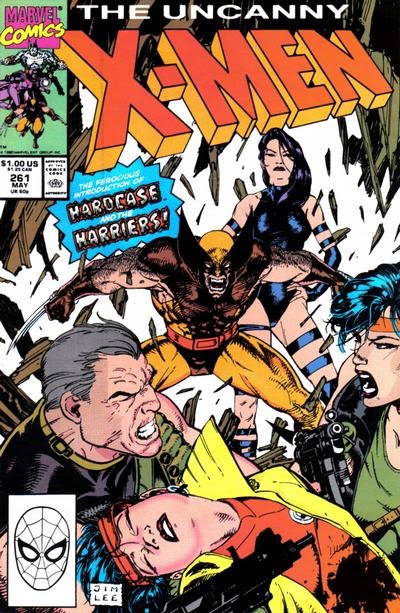 In a Nutshell
The first (and last) appearance of Hardcase and the Harriers.

Plot
In Lowtown, Madripoor, Hardcase, the leader of a group of ex-SHIELD agents named the Harriers, briefs his team on their latest mission: the abduction of Wolverine, Jubilee and Psylocke. Elsewhere in Lowtown, the trio is having dinner, and Jubilee expresses her continued distrust of Psylocke to Wolverine. Just then, the Harriers burst into the restaurant and capture Wolverine. Meanwhile, Banshee and Forge check out the subbasement of the X-Mansion, and spot the arrival of Jean Grey on the grounds, who is promptly attacked and captured by a group of Morlocks. In Greece, Donald Pierce offers the grievously injured Cylla Markham the opportunity to be transformed into a cyborg. In Madripoor, Psylocke tells Jubilee she's located Wolverine, and that she intends to spring what is most likely a trap while Rose Wu rallies Wolverine's local friends to his aid. 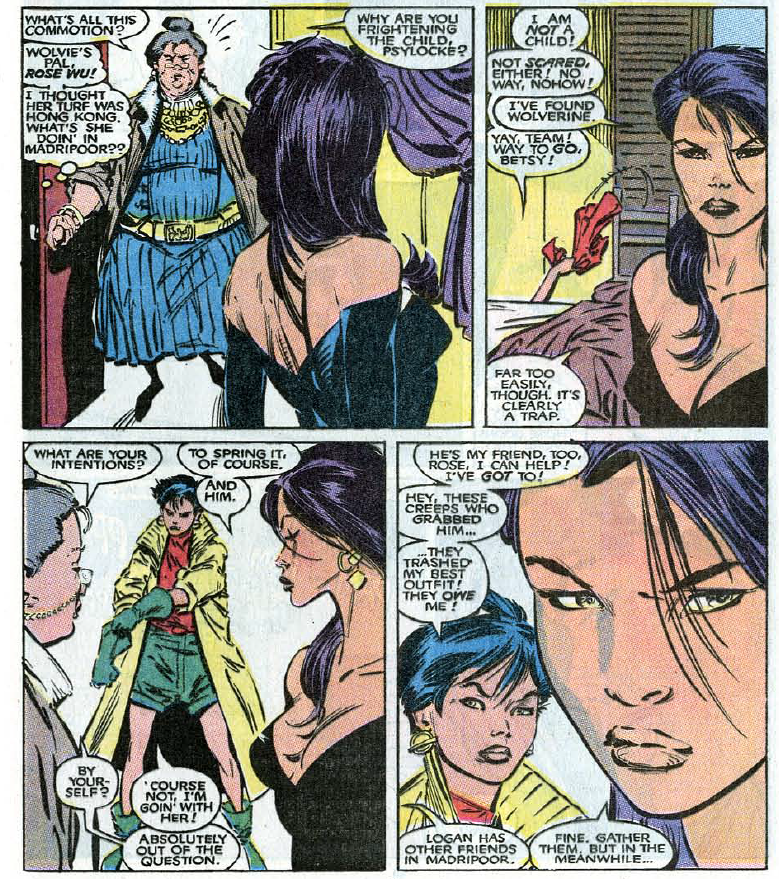 Later, Jubilee enters the Harrier's warehouse base of operations posing as pizza delivery boy while Psylocke sneaks inside. When Hardcase orders Jubilee to be removed from the building, she and Psylocke attack, with Jubilee freeing Wolverine from the cage in which the Harriers imprisoned him. They hold their own against the Harriers, but are eventually overwhelmed, at which point Wolverine and Hardcase reveal they're friends, the entire kidnapping scenario actually a training exercise for their respective teammates. As the two groups bond over pizza, Rose Wu bursts in with reinforcements, and Wolverine invites them all to grab a slice, thinking that his friends should enjoy the fun while they can, cuz next time, it'll be for real, and keeps.

Firsts and Other Notables
This is Marc Silvestri's last issue as the official regular artist on the series, as he leaves the book to take over Wolverine in a few months' time. His departure puts the book into a bit of a talespin, artistically, as the next half dozen issues (including the series' return to summer bi-weekly publication) are handled by an assortment of fill-in artists (of varying, though usually low, levels of quality) before Jim Lee takes over with issue #267.

As the cover touts, this issue also marks the debut of Hardcase and the Harriers, a group of ex-SHIELD agent mercenaries, though technically two of their number (Axe and Shotgun) appeared previously, in Wolverine #5 (an appearance referenced in this issue), while Hardcase was mentioned in that issue as well. He is, of course, another heretofore unknown buddy of Wolverine's, and will appear once more later in Wolverine, but otherwise, this issue is pretty much all she wrote on the Harriers, despite their big introduction. 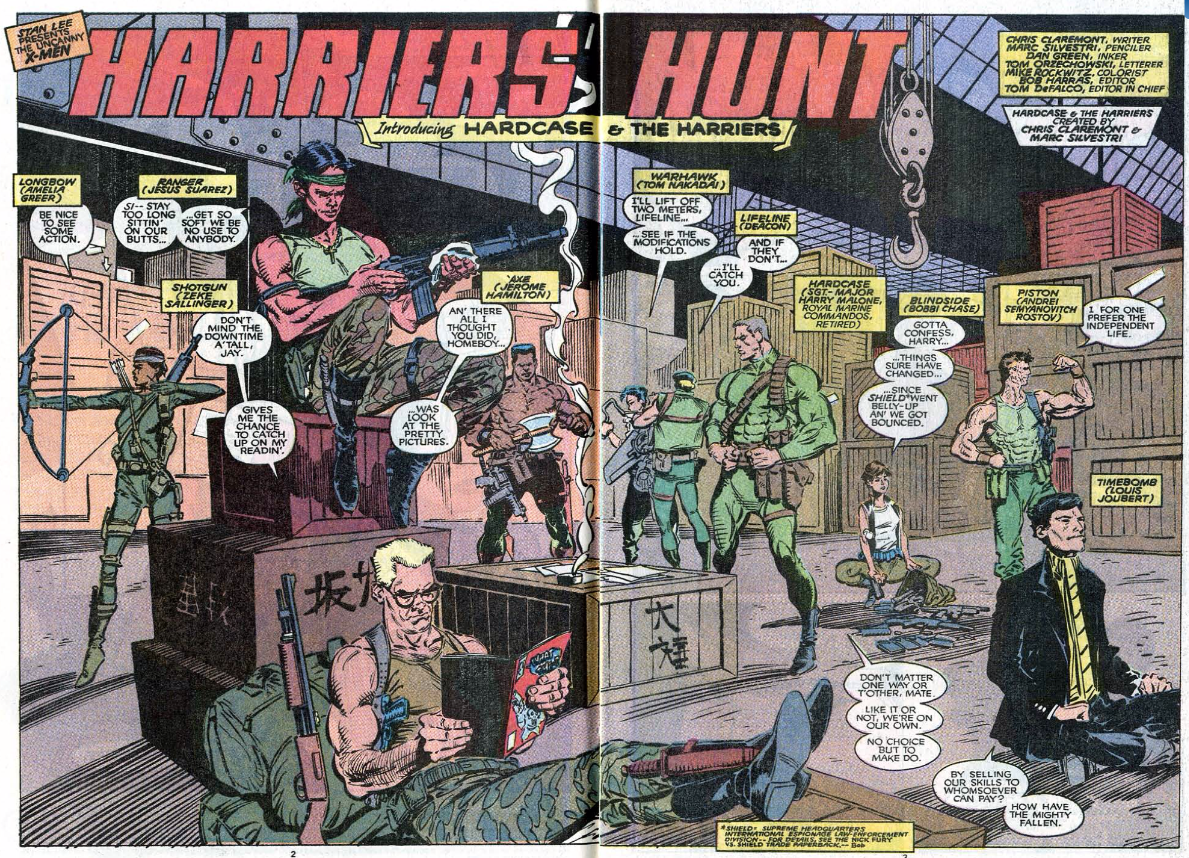 Forge and Banshee stop off at the subbasement of the destroyed X-Mansion (which Moira sent Callisto to lockup in issue #253, leading to her capture by Masque, and which was most recently used by Excalibur post-"Inferno"), ostensibly on their way to Hollywood to find Dazzler. Banshee expresses his suspicions that Moira set them up to be killed on Kyrinos last issue, and given that no other information on the matter will ever be provided, it's probably safe to assume Banshee is right. 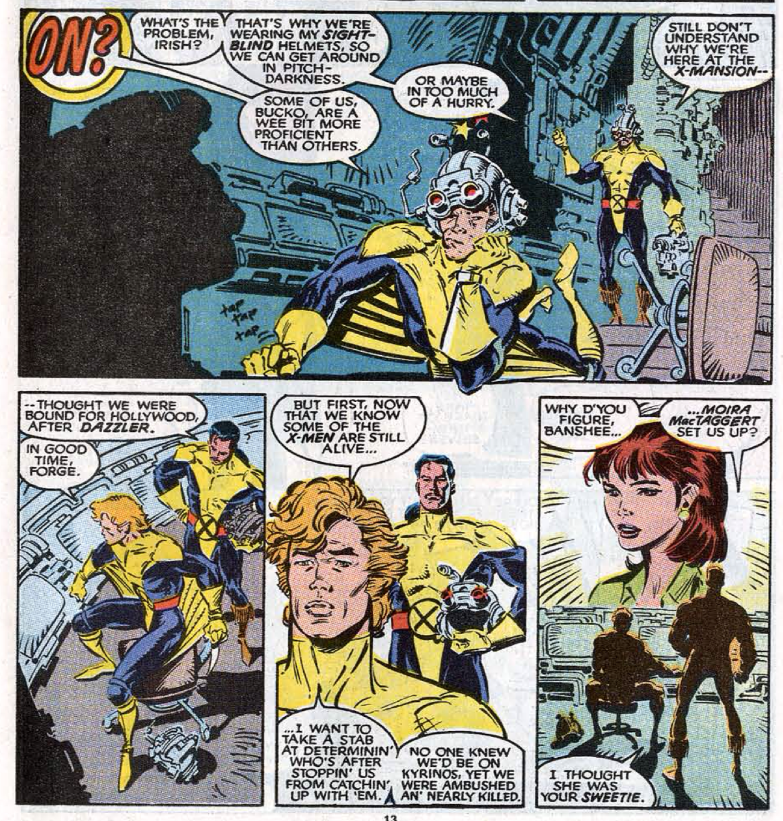 While at the X-Mansion, Forge and Banshee spot Jean Grey arriving amidst the ruins. She is attacked and captured by a group of Morlocks masquerading as the X-Men (and her), kicking off a little four issue guest appearance run for her in Uncanny. 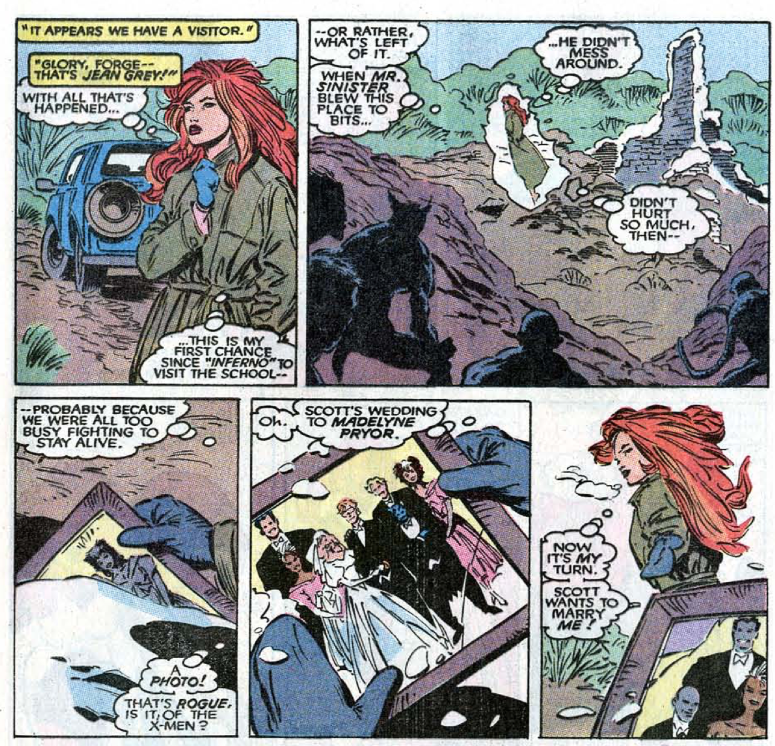 The injured Cylla Markham (Banshee & Forge's pilot from last issue) is approached by Pierce and offered to be transformed into a cyborg, an offer she accepts. 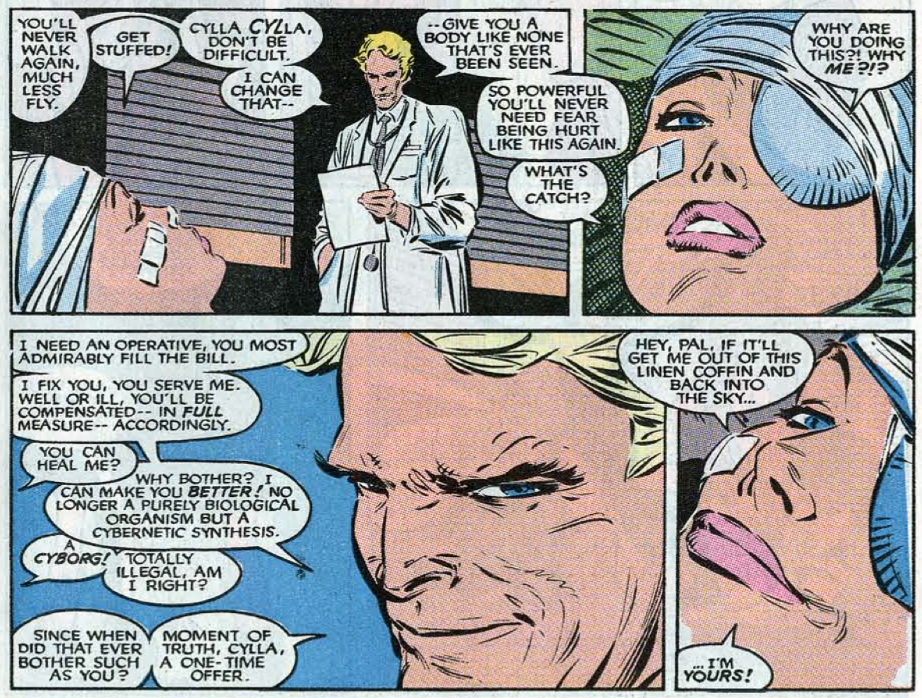 The Chronology Corner
Between issue #258 and this issue, Wolverine appeared in Alpha Flight #87-90, which we'll look at it in a few weeks.

Jean's appearance in this issue occurs after X-Factor #54.

A Work in Progress
SHIELD had been disbanded at this point in time, per events in Nick Fury's ongoing SHIELD series of the time.

One of the Harrier's real names is Bobbi Chase, which is probably a reference to the Marvel editor of the same name.

Wolverine continues to use the Patch identity, despite seemingly giving it up in Wolverine #23. 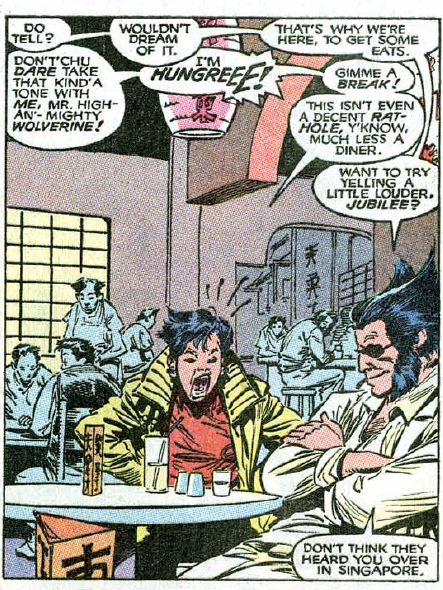 Rose Wu, who appeared in issue #257, helps marshall Wolverine's friends to his defense, though Jubilee notes that Rose was setup in Hong Kong previously, yet now seems to have a place in Madripoor as well.

It's noted that Jubilee can detonate her fireworks on cue. 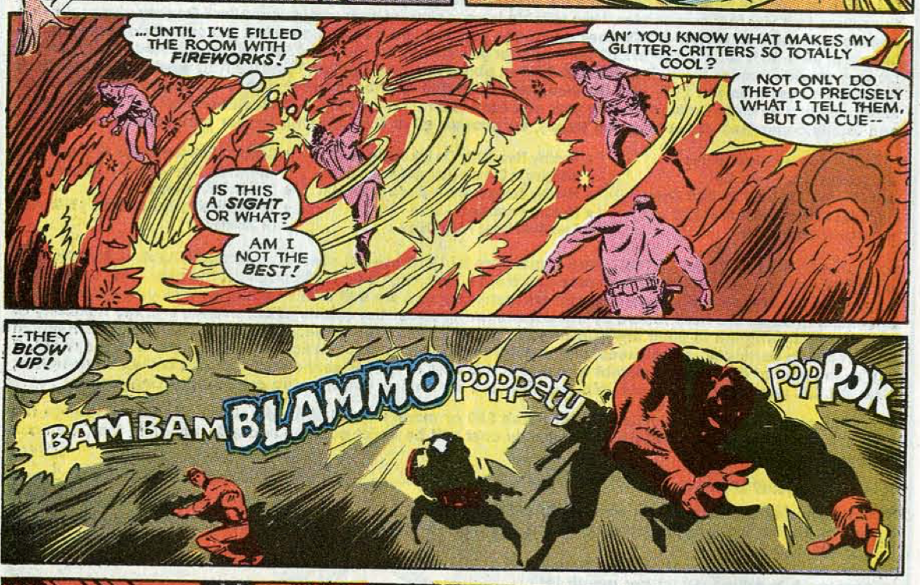 Psylocke, who previously was unable to read Jubilee's mind, can do so now. Obviously, it's now plot-beneficial for Jubilee to be read telepathically whereas previously it was not, but I suppose a No-Prize explanation could be that Psylocke's trip through the Siege Perilous and/or her transformation by the Hand has somehow enabled her to access Jubilee's mind when she couldn't before.

In a clear case of "build up the new guys by comparing them to the old ones", the Harriers are said to be capable of taking on the Avengers.

The Reference Section
Shotgun is seen reading issues of Marvel's What The !? humor comic in this issue.

"Harriers" is another name derived from aircraft.

"Professor Xavier Wolverine is a jerk!"
The whole "I pretended to be captured and let you believe these people are villains in order to train you!" is pretty blatant ripoff from the old Professor X playbook, calling it a makeshift Danger Room session.

It's in the Mail
A response to a letter in this issue's letter column insists a Longshot solo series is coming, not this year or the next, but eventually. However, it never does come to fruition.

Teebore's Take
Marc Silvestri's run, which stretches all the way back (including semi-regular fill-in stints) to either issue #218 or #220 (depending on when you consider him to have become the book's regular artist), comes to an end this issue. It's a shame he isn't given better material for his swan song, instead of an issue that reads like a backdoor pilot for a new series starring a bunch of one-dimensional GI Joe knockoffs. Of course, it's entirely possible that Silvestri and/or Claremont were treating this as a proving ground for some new characters, in the hopes that they'd take off and perhaps get their own series (the pair gets a "created by" credit for the group in this issue, suggesting they may have had a larger financial interest in the success of the characters). Nevertheless, that didn't happen, and so we get an issue in which time is split between Wolverine, Jubilee & Psylocke and a bunch of characters who are getting a big introduction but never turn up anywhere, ever again, as of this writing. The end result is an issue that feels like a waste of time, even though it does do some effective and necessary work solidifying the Wolverine/Jubilee/Psylocke sub-team dynamic following "Acts of Vengeance" and Psylocke's transformation.