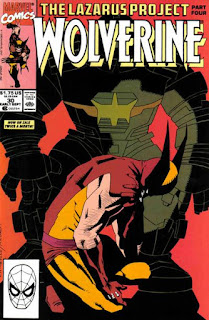 In a Nutshell
Wolverine, Karma & Target destroy the Lazarus Project.

Plot
At the Prince's palace in Madripoor, Dr. Page tends to Pinocchio as the Broker receives word that the forces sent to Rumika were all killed and the island is now abandoned. He sends his men to warn General Coy. Meanwhile, Wolverine, Karma and Target sneak back into Madripoor, with Target wondering what happened to his cousin Ricky, who joined the Lazarus Project along with him after their parents were killed. The three attack the palace, much to Coy's dismay, who takes his men to hide behind Pinocchio. When the three heroes reach Page's lab, Wolverine attacks Pinocchio, damaging the robot enough to reveal there is a human inside it, whom Target realizes is Ricky. He urges Wolverine not to destroy the machine, and Karma uses her power to bring Ricky's consciousness to the surface. Wolverine then knocks out Dr. Page before she can remotely destroy Pinocchio's organic tissue, and Karma severs her ties with her uncle. Wolverine then tries to track down the Broker, but he fakes his death and escapes. Wolverine is content, however, at having shut down the Lazarus Project and allowing the dead of Rumika to rest in peace.

Firsts and Other Notables
The four part "Lazarus Project" and Jo Duffy's short run/extended fill-in comes to an end with this issue, as she makes way for Larry Hama's debut next issue. Her first couple of issues weren't terrible, but the last three part of the "Lazarus Project" are, in part because they tie-in to a story that never saw print (Fallen Angels II), though even then this would still be something of a mess.

This issue does at least reveal that Coy bought into the Lazarus project believing he'd get super-powered soldiers out of it, but whatever the Master Form's deal is remains a mystery.

Karma terminates her partnership with her uncle this issue, thanking him for his efforts in locating her missing siblings but telling him they're even now, and warning that if he harms anyone outside of Madripoor, she'll come after him. Karma next appears in New Warriors #45. 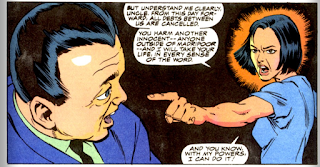 Creator Central
Fresh off his stint not being Jim Lee over on Uncanny X-Men, Bill Jaaska fills in on this issue, the four part story's third artist.

The Best There is at What He Does
The Broker argues that, since Wolverine's claws are metallic and interface directly with his body, he can be classified as a cyborg, which is an interesting perspective only in light of his rivalry with the cybernetic Reavers.

Teebore's Take
As endings go, the best thing that can be said about this one is that it is, indeed, an ending. We do learn a little about the Lazarus Project (Coy funded it expecting to get super soldiers in return) and Karma finally severs ties with her uncle, but whatever the Master Form is (and whether it's even supposed to be/do something/anything) remains unresolved, and the whole thing just feels like a waste of time. It's possible, that had Fallen Angels II been published prior to or concurrent to this, as planned, that the whole thing might make a little more sense, but the need for additional context is only one of this story's problems, and really it's the only one Fallen Angels II could have addressed.

Aside from that, the art is inconsistent, the middle chapters, especially the third, are a complete waste of time, and the villains' motivations are hazy and unclear. The first chapter of the story, with Buscema on art, was promising, but it's been downhill from there, and Duffy's short run on the title comes to a close with a whimper. Larry Hama and Marc Silvestri can't arrive soon enough.

Next Issue
Captain Britain and Meggan have a night out in Excalibur #28, and the Hama/Silvestri run finally begins in Wolverine #31.