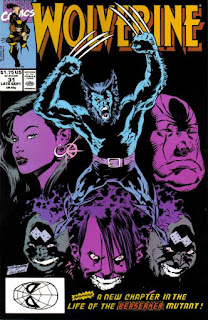 In a Nutshell
Wolverine fights the Yakuza in Madripoor.

Plot
Wolverine and Archie Corrigan are enjoying a drink at the Princess Bar when a group of Yakuza thugs enter , looking for Wolverine. Archie slips out the back, but is briefly accosted by two more Yakuza, Reiko and Goro, before being allowed to leave, as Reiko believes their boss may have a use for him. Meanwhile, the Yakuza leader, Dai-Kumo, demonstrates a new cancer-fighting drug to Prince Baran, Tyger Tiger and General Coy. Made from the hypothalamus of a protected species of monkey native to Madripoor, he hopes to use Coy's opium harvesters to gather the animals and Tiger's smuggling network to get the creatures to Japan, where the drug will be processed and sold to the mega-rich. Though Tiger has reservations about the scheme, Dai-Kumo insists the only stumbling block is Wolverine. 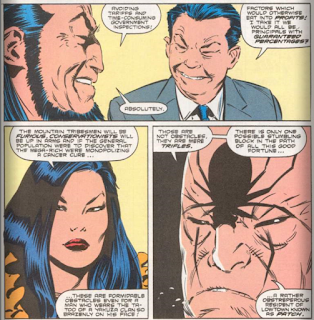 Back at the Princess Bar, the fight between the Yakuza and Wolverine brings down part of the building and spills out onto the streets, while Archie learns the police have been bribed to stay out of the fight. At the Prince's palace, Tiger asserts that the notion of taking out Wolverine would be rash, and, worried about Dai-Kumo's true intentions, declines his offer, just as Goro brings Dai-Kumo news of Wolverine's death. In Lowtown, three of the Yakuza take Thunderbolt, the actual drug Dai-Kumo is planning to manufacture, which grants them superhuman abilities, then savagely attack an over-taxed Wolverine. Tiger and Archie arrive on the scene just as the last remaining Yakuza tackles Wolverine into the harbor while holding live grenades, but after a large explosion, he climbs out of the water, having fed the Yakuza to sharks. Watching from afar, Goro vows to Reiko that he will take care of Wolverine himself.

Firsts and Other Notables
This issue marks the beginning of both Larry Hama and Marc Silvestri's run on the series. Silvestri, who left X-Men specifically to draw this series, will stick around, barring a few fill-ins, until issue #57, while Hama, a long-time Marvel editor and freelance writer best known for his long run on the original GI Joe series (as well as writing most of the Joe file cards for the original Real American Hero action figure line), will last, three fill-in issues aside, until issue #118, making him without a doubt the dominant creative voice of this series (at least in its first volume), and arguably the most significant writer of the character after Chris Claremont.

Silvestri is joined by his Uncanny X-Men inker Dan Green.

Dai-Kumo, the leader of the Yakuza in this issue who appears for the first time, will later be revealed to be working for the Hand in this story.

A Work in Progress
A reminder that Wolverine owns half the Princess Bar, he jokes when his fight with the Yakuza bring part of it crashing down that it was O'Donnell's half which got destroyed. 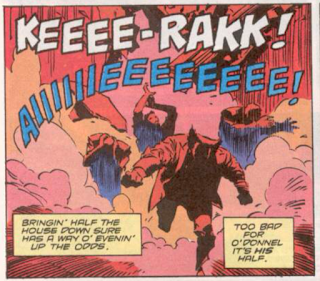 Wolverine also references the time he fought and was stabbed by Shingen Yashida, in the original Wolverine limited series. 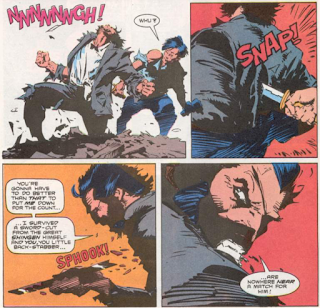 The Best There is at What He Does
During the midst of his battle with the Yakuza, Wolverine briefly slips into a berserker rage. 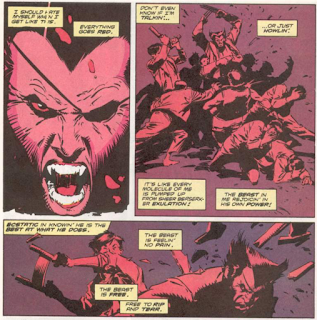 After the fight, he notes that given all the damage he's taken, it will take his body longer than usual to heal. 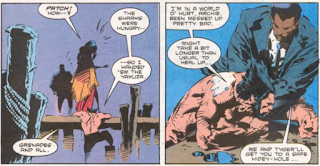 Marc Silvestri on leaving Uncanny X-Men for Wolverine
"I was getting pretty burnt out from doing the book. There were some years we had to do fifteen issues instead of twelve and I had enough trouble doing twelve. Fifteen was a lot of work. The thought of moving over to Wolverine - a single character book featuring one of my favorite characters - was a relief! I was like, 'I'm ready to go.' That turned out to be a great switch for me. I'm happy it happened."

Silvestri on working with Larry Hama
"Larry is just one of those guys who's intimidating without you ever even having to meet him. He's got this great voice, one that is just full of bravado. He could order lunch and you can almost hear the guy taking that order trembling over the phone. Larry was great! Larry's probably the most manly man in comics, I'd say... But I loved Larry's stories: he wrote like he was. He presented Wolverine as the manliest man in comics, bar none. There was a reason why he was covered in hair! You've got to read those stories. I had a great time with Larry. I think I did much better work on his Wolverine stories than I did on Chris's X-Men stories. And I'm only kidding about Larry. He's actually one of the sweetest guys in I know (I have to say that or he'll kill me)."

Teebore's Take
The arrival of Larry Hama as writer and Silvestri & Green as the new art team in this issue essentially serves as a second beginning for the series, giving it a consistent artistic voice and vision for the first time since the earliest days of the title (and, given that the Claremont/Buscema pairing that launched the book lasted for less than a dozen issues, it could be argued this marks the beginning of the book's first significant creative run) and, with that in mind, it's hard not to be excited while reading it. But without the benefit of hindsight, there's honestly not a lot to this issue to make it all that different from the various stories and creative runs that preceded it: Silvestri & Green are fine, transitioning smoothly from Uncanny X-Men, but the plot here isn't terribly complex; it's essentially an issue-long fight between Wolverine and some mostly generic Yakuza goons.

But that said, there's some flashes which suggest better things ahead even without the benefit of hindsight. Hama makes use of what's left of the book's supporting cast, including the Prince, Tyger Tiger, General Coy and the under-used Archie Corrigan, and plants the seeds for a larger narrative arc, both in the specific details involving Dai-Kumo's drug scheme and in the use of the Yakuza, begininng the strengthening of ties between Wolverine and Japanese culture that will become a hallmark of Hama's run.

More importantly, right out of the gate, Hama displays a strong understanding of the title character. Wolverine doesn't do much besides fight in this issue, but his internal monologue, delivered via narrative captions, fits the gruff, weathered voice established by Claremont in the original limited series and the early issues of this one. The struggle to control his wilder urges, his devotion to his friends, the resiliency of spirit as well as flesh; these are all, at this point, basic elements of Wolverine's character, but it's important to have a solid grasp of the basics, and Hama shows that here. In the moment, it's not that exciting of a beginning, for either a story or a creative run. But knowing what's to come, it's nonetheless refreshing just to know the series has finally reached the start of a consistent artistic vision. For now, that's enough to make it exciting.

Next Issue
Next week, X-Factor: Prisoner of Love.