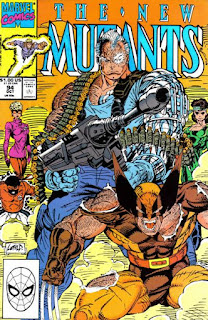 In a Nutshell
Cable & Wolverine fight, then team-up to help defeat Stryfe and the MLF.

Plot
Wolverine and Cable savagely fight one another, while Cannonball, Boom-Boom, Warlock and Sunfire are held captive by the MLF. However, Cannonball goads Dragoness into kissing him, and he uses the opportunity to filch the key to their restraints from her headdress. Back at the docks, the rest of the New Mutants, worried that Cable and Wolverine will kill each other, intervene by dropping a water tower on them to break up the fight. As cooler heads prevail, Cable fills Wolverine in on the situation with the MLF and the drug Sleet. Elsewhere, Stryfe sends his expendable soldiers after the escaped New Mutants, needing the MLF to disperse the sleet, after which it won't matter what Cable and the New Mutants do. However, via stealth, the escaped New Mutants manage to capture one of the soldiers, and Sunfire threatens him with his power in exchange for the location of Sleet. 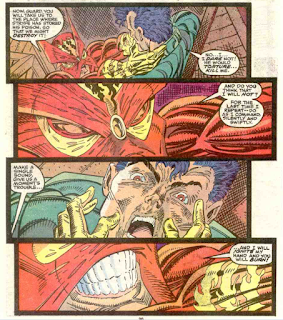 Meanwhile, the rest of the New Mutants and Wolverine have used their portable Cerebro to locate Stryfe's warehouse. They break in to discover the rest of the team beat them there, just as Stryfe and the MLF arrive. The two teams battle, with Cable taking on Stryfe one-on-one. However, as Sunfire and Dragoness duel, Rictor tries to help, but his attack causes Dragoness to lose control of her power, setting the warehouse on fire. The New Mutants retreat as the weapons and explosives in the warehouse detonate, destroying Sleet. The New Mutants note that Stryfe was undone by his own weapons, but Cable isn't confidant he's gone for good. Boom-Boom worries that if Stryfe is dead, they'll never find Rusty & Skids, but Cable assures her finding her friends is next on their agenda.

Firsts and Other Notables
This issue represents the first on-page, face-to-face interaction between Cable and Stryfe. The fact that they're in the same place at the same time is significant given some of the theories that cropped up about their relationship given later revelations in this series. 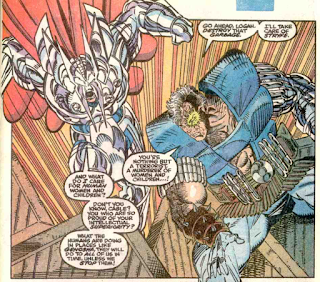 As the issue ends, Cable declares that rescuing Rusty and Skids from the MLF is next on the New Mutants' agenda. Whether that was the intended post-"X-Tinction Agenda" story for the series, which ultimately didn't happen due to the departure of Simonson and/or the transition to X-Force, or if X-Force was a known thing at this point and the dialogue is just an attempt to setup the "next issue" box's play on words, I have no idea. Either way, we never do actually see Cable and the New Mutants attempt to rescue Rusty and Skids from the MLF.

The image of Cable on the cover of this issue was used as the cover for the early editions of the Cable trade paperback which collected issues #87-94 (sans the fill-in #92) and was the means with which I read many of those issues for the first time back in the day.

A Work in Progress
Warlock points out that the New Mutants at this point have been trained by Professor X, Magneto and Cable, thus giving them a unique perspective on and approach to things relative to other students of Xavier's, something I've always enjoyed and appreciated when it gets referenced. 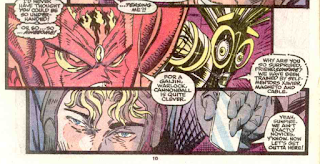 Cannonball mentions he's been discussing tactics with Cable, while Boom-Boom reveals that Cable has been having the New Mutants practice their martial arts.

The Grim 'n' Gritty 90s
Wolverine tries to light up, then complains that the New Mutants ruined his cigar.

Young Love
Cannonball goads MLFer Dragoness into kissing him, enabling him to lift the key to his manacles from her headdress (why she keeps the key there, why it's a key card when they're clearly wearing old-fashioned chains, how he knew it was there, and why she reacted to his words by kissing him is not made clear).

This then prompts Sam to tease a jealous Boom-Boom, which in turn prompts her to kiss him, something which surprises them both (how she's able to kiss him when they were earlier shown to be chained back-to-back to each other is not made clear). 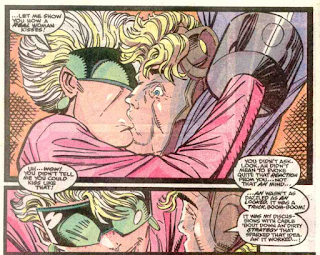 The Cable Guy
While Wolverine's animalistic senses and healing factor are detailed as his powers, Cable is simply described as, essentially, being a tough, determined and capable fighter in his own right. 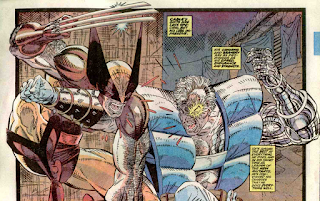 The Best There is at What He Does
Wolverine says that the fight between him and Cable is real enough, and goes back a long ways, another cryptic hint at the past of the two kings of cryptic hints about their past at this point in time, though I don't believe we ever learn much more about what their beef with each other at this point is, specifically. 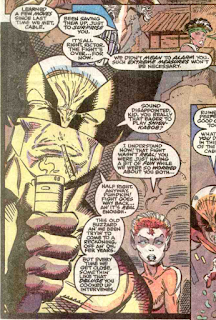 Claremontisms
Wolverine's bones are described as being "nigh-indestructible".

501 Genes
Please note the conveniently-feet-obscuring cloud of dust/smoke on the cover.

I'm not exactly sure what's going on with Cable's hand in this panel, but I suppose since it's robotic/cybernetic, it doesn't have to obey the laws of human anatomy... 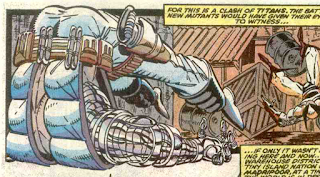 Cable apparently manages to punch Stryfe's red cape right out of existence (or into invisibility). 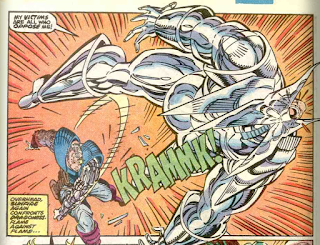 Teebore's Take
While much of this issue is handed over to an ultimately superfluous Wolverine/Cable fight (which was, of course, the bee's knees back in the day), it also does an effective job of showing the impact of Cable on the New Mutants. Granted, we're "shown" that impact mostly by being told about it, stuff like Sam having discussed leadership strategy with Cable while Boom-Boom asserts that the New Mutants have been honing their martial arts skills at Cable's insistence. But given that this issue is, essentially, the swan song of the Cable-led New Mutants (the next three issues are handed over to "X-Tinction Agenda"; after that, it's all deconstruction and rebuilding going into X-Force), any effort to illustrate the changes on the team wrought by Cable is appreciated. Additionally, there's some advancement of the Sam/Boom-Boom romance, something that's been simmering off and on since the days of Brett Blevins, and we get the first face-to-face confrontation between Cable and Stryfe, a meeting that will retroactively increase in significance as their relationship becomes more and more prominent in the X-Universe. This isn't quite characterization amidst action on the level of Claremont or even earlier Simonson (and much of the action is rushed/nonsensical), but for a Liefeld-drawn comic chiefly remembered for its gratuitous Wolverine guest appearance, it's not too shabby, either.

Next Issue
Tomorrow, love is in the air in X-Factor #59. Next week, get out your three-ring-binder, your plastic sleeve pages and your hologram chase cards, we're examining the Marvel Universe Series 1 trading card set!