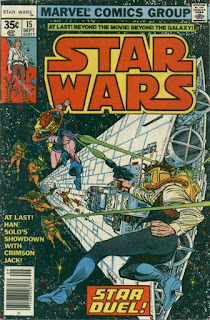 In a Nutshell
Han Solo faces off against Crimson Jack above Drexel.

Plot
In the space above Drexel, Crimson Jack's ship is suddenly freed of the effects of the sonic jammer, and Jack  orders Jolli to target Han Solo the moment their fighter craft are repaired. On Drexel, an anxious Han waits as Chewbacca and the droids inspect the Falcon to make sure she's space-worthy. Just then, the floating ship is attacked by a Y-wing, and everyone rushes aboard and off the planet. In space, Han and Luke man the gun turrets as more of Jack's fighters attack. They fight them all off save the Y-wing, which is piloted by Jolli. She crashes into the Falcon, managing to destroy its gyro control module but sending herself spinning off into space. Stranded, the Falcon is contacted by Jack, who is about to destroy it, but Han reveals that he stole all of Jack's navigational information when Chewie had earlier tapped into the ship's computers. Without it, Jack is as stranded as the Falcon, so Han proposes a trade: the module he needs in exchange for the navigation data. 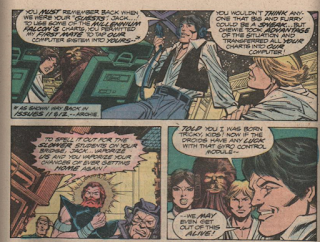 As they prepare for the swap, Jack is contacted by Jolli, who needs help returning to the ship, but he refuses to give it, worried it'll interfere with his plans. Outside his ship, protected by its magnetic field, Han and Jack make their exchange, but once Jack has what he needs, he signals his ship to narrow the field, cutting Han off from the Falcon as his pirates pour out after him. Just then, Jolli returns, enraged that Jack left her to die, targeting his men and crashing into the munitions deck, crippling the ship. Jack survives the explosion but is blasted by Han, after which he and the needed module are picked by the Falcon. Later, searching the wreckage of Jack's ship, Han and Leia find the dead Jolli. Han kisses her goodbye, then everyone sets off for the long journey home.

Firsts and Other Notables
The conclusion to the "Doomworld" storyline, this issue also sees the apparent end of both Crimson Jack and Jolli, the latter sacrificing herself to help Han by taking out Jack, after Jack left her for dead. I have no idea if either character pops up again later in the series (this is comics, so it's possible), but it certainly seems like readers are at least meant to assume they're both dead at this point. 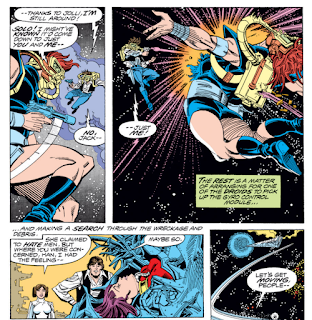 A Work in Progress
Luke reveals in this issue that he can't swim, a condition he's been doing his best to overcome while trapped on a water planet. Which, of course, makes sense for someone who grew up on a desert planet. 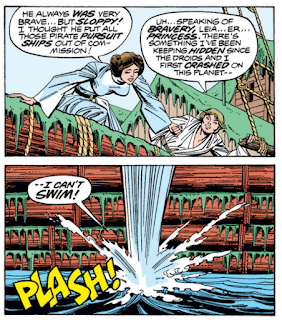 Just in time for her death, we learn a little bit more about Jolli, specifically that she and her mother were abandoned by her father on a war-torn world when she was a girl, leading her to constantly try to prove herself and to her hatred of men. 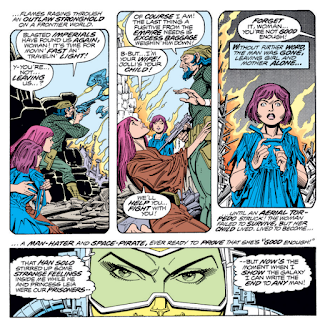 It's established that the magnetic field around ships (presumably what we'd think of as the ship's shields) offer protection against some elements of outer space. People still need breathing apparatus (as the field doesn't create any air), but they can travel through space with exposed skin and without any kind of spacesuit. 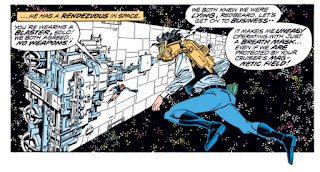 The Space-Lexicon
The "Fire Rings of Fornax", an exclamation coined by Roy Thomas, is used again. 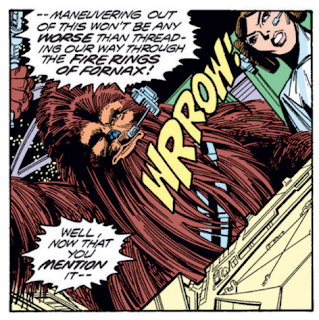 Um, Actually
Once again, characters repeatedly refer to entering hyperspace/jumping to lightspeed as "going to warp".

Threepio claims that Wookiee isn't one of his primary languages, though he had no issue understanding Chewbacca in A New Hope (also, the official name for the Wookiee language would later be named "Shyriiwook", not "Wookie"). 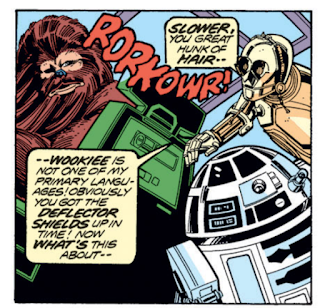 Remember Star Wars?
As the Star Warriors face off against Crimson Jack's forces, the Millennium Falcon's escape from the Death Star and pursuit by TIE fighters following Obi-Wan's death is recalled, first via dialogue and then outwardly in the narration. 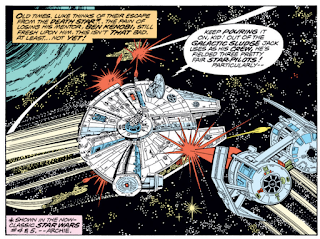 You Kiss Your Sister With That Mouth?
Heading out to make the exchange with Jack, Han tells Luke to look away so he can kiss Leia goodbye without feeling guilty. 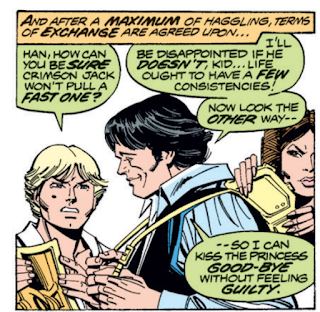 That 70s Comic
The navigation data Han stole from Jack is apparently stored on tapes of some kind. 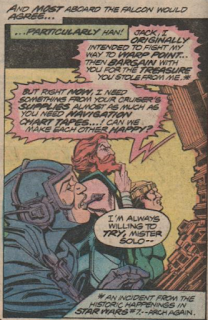 Artistic Achievements
Really nice cover on this issue, one of the best so far (and the apparent goof of Han operating in space without any kind of protection aside from a scuba-like breathing apparatus is actually addressed in the issue itself). Also, kudos to Infantino for not always drawing the ships in space on a horizontal plane relative to the figures in space.

Teebore's Take
The formal conclusion to the "Doomworld" arc, this issue puts to rest, seemingly for good, Crimson Jack and Jolli, the two most significant original creations of the series thus far. In the case of Jolli, who became an increasingly problematic character the more we learned about her (here falling into the "scorned woman vows to prove herself to men even while hating them" trope), this is probably for the best, but its a shame to lose Crimson Jack, who, outlandish appearance aside, made a good foil for Han and an effective non-Imperial-yet-still-recurring antagonist for the rest of the heroes. Plus, the idea of a pirate working out of a captured Star Destroyer is pretty great (so much so that the later Expanded Universe will return to it, with Booster Terrik).

Long term implications aside, Goodwin & Infantino carry over the energy and momentum of the previous issue into this one, once again providing an action-packed and well-rendered story. It's actually really well-constructed, for the way it works as both a single issue (the immediate conflict with Jack is introduced and resolved within these pages), a chapter in the larger story (the immediate conflict is triggered by events in earlier installments of the storyline), and as a piece of the larger series' narrative (in that the Han/Jack conflict is informed by their previous encounters, and Jack's death means something for the future of the series). It's not too unusual to see a single issue of a comic manage to accomplish two of those feats (though far too many comics nowadays manage only one), but it's rare, even in the 70s and 80s, to find one that does all three. It's a testament to just how well Goodwin & Infantino are clicking, coming out of their first big storyline on the book.

Next Issue
The debut of Valance the Hunter, the return of the Star-Hoppers of Aduba-3, and Walt Simonson!